Bill Promises to Take Taylor’s Secret to the Grave 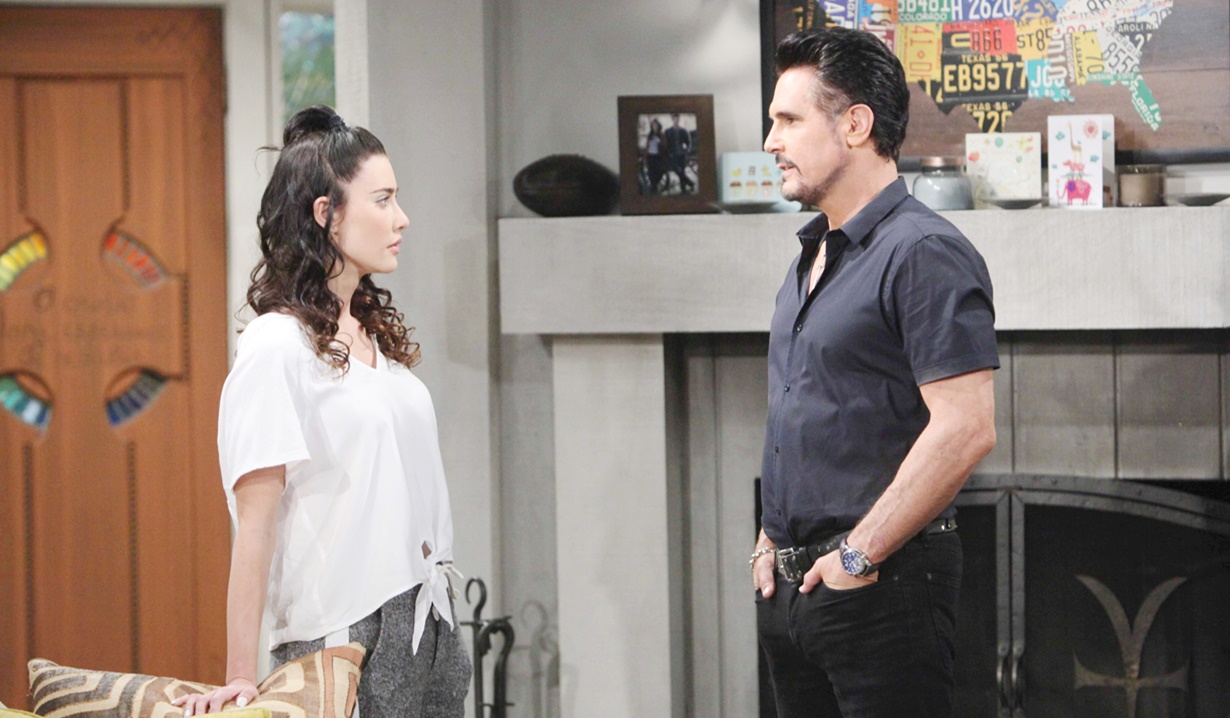 At Forrester Creations, Brooke opines that this pregnancy news will change Liam’s life as much as Hope’s. Hope recalls why he proposed to her, and worries about interfering with his family.

In the cliff house, Liam says goodbye to both his girls before heading back to work. Later, Steffy’s napping when Bill knocks on the door. She doesn’t want to let him in, but he wants to apologize. Once inside, he questions if Liam’s working for her or Hope. Steffy mockingly asks if Bill just drives up and down the street until Liam’s car is gone. They rehash what he’s done to her and his family. Bill wants her to acknowledge the night they spent together wasn’t a mistake, it was so special it scared her. Steffy never blamed him for that night, but look what it cost her. Bill intones it was the most powerful, intimate moment of his life, and all she can say is she doesn’t love him? Steffy concedes she wouldn’t give herself to a man she had no feelings for. He thanks her for that, and promises he’ll take the secret regarding Taylor to his grave.

Bill’s disgusted he held it over Steffy’s head now. Steffy asks, “I’m free to marry the father of my child?” Bill says if that’s what she wants. He wonders if he’ll be in her life again. Steffy feels that’s up to Liam…and him. Steffy confirms the baby’s well. Bill accepts she can’t forgive him today, and leaves. Steffy smiles. “Nothing’s in the way anymore.”

Liam comes upon Ridge and Thorne needling one another in the Forrester Creations boardroom while looking for Hope. Ridge notes she left. Liam mentions they have an issue with the website – they had a negative comment about Hope, so he wants to keep an eye on it. Ridge reads the post for himself, while Thorne notes how quickly the comment went up – it could be someone in this building. He lists off Emma, Maya, and Sally as possibilities. Liam nixes Sally – it’s not her style. After, Ridge warns Liam about spending too much time there, and asks why they’re not married. He’s puzzled to hear Steffy wants to wait. Liam assures him they’ll get married – he loves her too much not to. Ridge is pleased.

While Brooke and Hope await the doctor in her examination room, Hope laments the bad timing of things in her life. Brooke, however, questions if it’s bad timing or good timing, since Steffy and Liam haven’t remarried.

Dr. Phillips joins them and Hope mentions her pregnancy, if confirmed, will affect a lot of people. While waiting for results, Hope worries Steffy will accuse her of doing this deliberately. Brooke sniffs that they’re only roommates – Hope and Liam belong together. Dr. Phillips returns and confirms Hope is pregnant. Brooke and Hope tear up. Hope imagined having Liam’s child, but not like this. Brooke urges her to fight for what she deserves – Liam is her destiny!

Sally prepares for the 4th of July at the beach house.