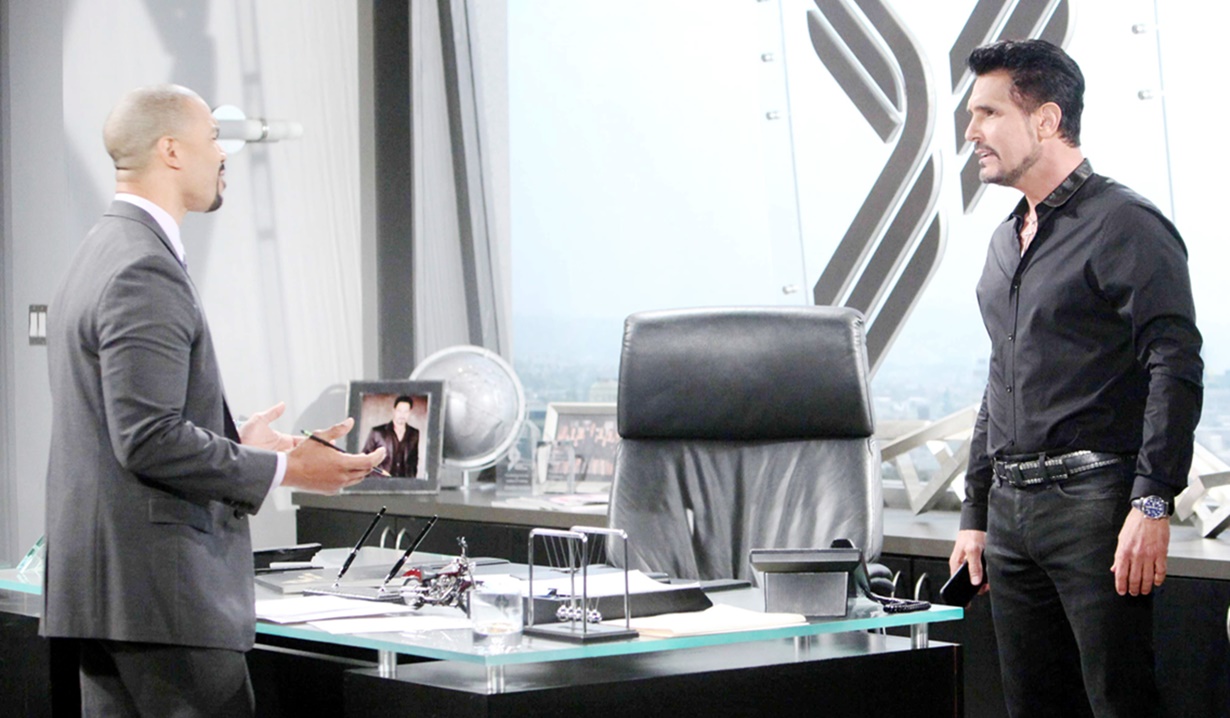 Hope observes that Liam’s making a family with Steffy; she doesn’t know what to do. She had hoped that they’d be married, but they’re not, and he already has a family. Brooke thinks it’s fate that Steffy decided to wait to marry Liam. Hope agrees with Brooke that Liam needs to know she’s pregnant. In the design office, Liam feels the threatening comment on the website about Hope must be a joke. He and Thorne discuss tracking down the IP address and Liam saves it as evidence. Thorne agrees to keep it between them until they figure out if it’s a hoax. In the studio, Xander listens as Emma and Maya compare notes on Hope bypassing them for the Hope for the Future line. Maya’s upset she’s not modeling, and Emma’s disappointed Hope dropped the dance component. The trio discusses whether Hope’s changed since Liam rejected her again. Thorne comes in on the conversation and notes Emma and Maya’s displeasure with Hope. Maya walks off, and Thorne advises Emma and Xander if they have issues to deal with them properly through HR. Later, Xander assures Emma she did nothing wrong and they hug.

At Spencer Publications, Bill’s distracted, and Justin knows he’s obsessing about Steffy. He advises his boss to snap out of it and start respecting Liam’s family by not interfering more than he already has. Bill grimly acknowledges he’s become obsessed to the point he’s done things even he wouldn’t normally do – he’s been making Steffy’s life miserable. He understands she wants a life with Liam having just had his baby, and it didn’t stop him from doing something foolish, and putting her in an untenable situation. Justin realizes he truly cares for her. Bill wants the best for Steffy – he thinks that’s him – but only she can decide. He ruminates about alienating Liam and decides all he can do is not cause any more damage – there’s nothing stopping Steffy from marrying Liam now.

In the cliff house, Steffy recalls Bill’s threat – if she marries Liam, her mother will go to prison. Later, she relaxes with Liam on the couch and jokes they had their first mother and daughter mani-pedi today.

Liam tries to imagine their daughter on her first date. Steffy asks how it went at Forrester today, then senses something is wrong. Liam only says the website shouldn’t take too much longer. Steffy says she and Kelly miss him, and she thinks the less time he spends with Hope, the better. Liam wants to be there as well. Steffy knows he cares about Hope, but they need to focus on making a secure home for Kelly.