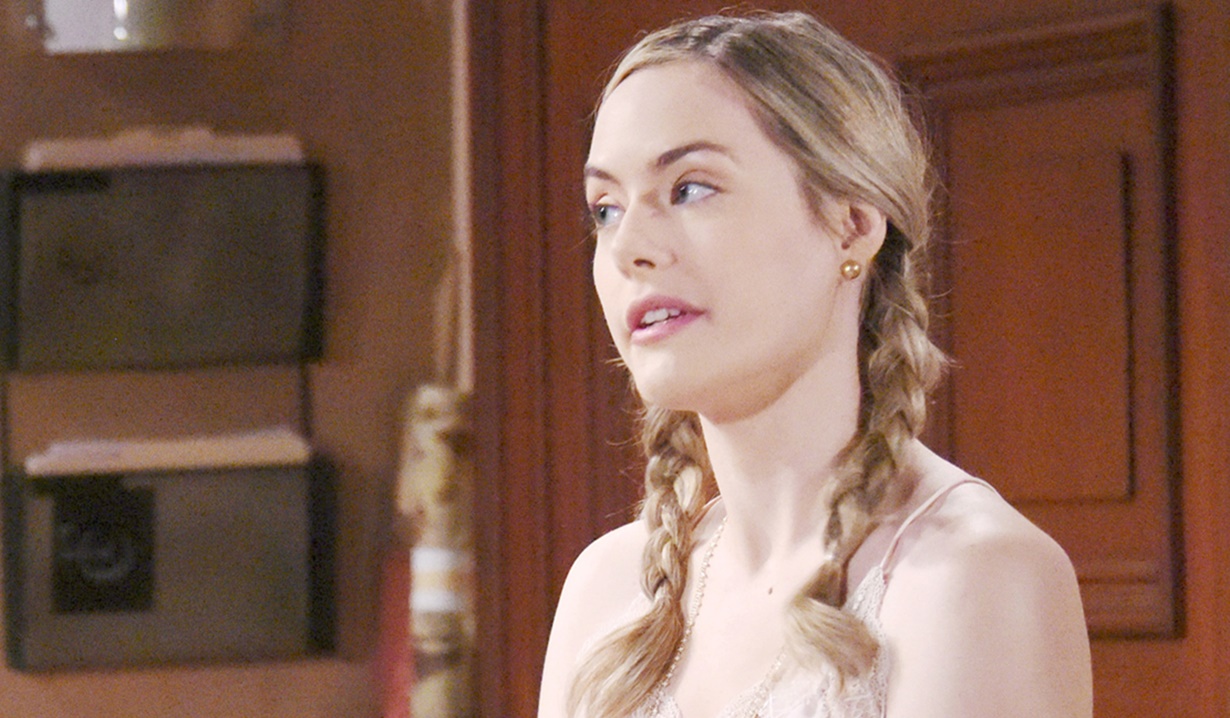 At Forrester Creations, Sally listens outside the door as Hope asks Wyatt if this is a fling, and questions, “You don’t really have feelings for Sally Spectra, do you?” Wyatt explains they’re just getting to know one another, but he likes the person he’s seeing. He wants Hope to promise to give Sally a chance. In the design office, Liam chats with Thorne and Brooke. He refers to Steffy as his wife and Brooke asks if a date’s been set. Liam explains that they’re holding off, and Thorne wonders if Steffy’s okay with him working so closely with Hope. Liam assures him they discussed it, and it’s not a full-time gig. Brooke notes Hope is grateful, and adds she had to find something to throw herself into. Liam acknowledges the break-up was difficult. In the studio, Charlie finds Emma holding up her phone in front of a rack of clothes and snarls, “Busted.” He accuses her of photographing the designs, but she insists she was just texting a friend. Emma invites him to look for himself, as Maya and Xander appear. Charlie fills them in. Maya’s angry, but Xander states that Emma’s innocent – she just pulled out her phone. Charlie says, “Rules are rules,” and Maya agrees.

Sally watches Hope in her office alone. She’s about to speak but Pam interrupts that Liam wants to see Hope. After Pam goes, Sally asks Hope to show her some respect. Hope makes her way to the design office and goes over the website with Liam. Pam spies as they work, and sees Hope touch Liam’s hand while thanking him. As Hope exits, Pam muses that she’s heard stories over the years about the Logan women’s antics – she thought Hope was different, but she’s a Logan through and through. She tells Hope to respect Steffy and Liam’s family and stay away from him. Hope goes to meet with her team in the boardroom, and stresses the importance of security to Emma again, before letting Maya know they won’t be using her in the fashion show. Hope suddenly acts strangely and excuses herself. Maya slams out in anger, and Emma thanks Xander for sticking up for her earlier. Xander assures her he has her back. They embrace. Later, Charlie joins Pam at her desk. He plans to keep his eyes on Emma. Pam’s distracted – she’s upset about Hope being too friendly with Liam. Hope walks past and joins Brooke in an office. She says she’s not been feeling well, and pulls out a pregnancy test. Brooke agrees to wait while she takes the test. Hope soon rejoins her to wait and vows she won’t interfere with Liam’s family. The timer goes off and Hope gets out the test. Brooke asks, “Are you going to have Liam’s baby?” In the studio, Sally looks at the comment section of the Hope for the Future website. Upstairs, Thorne and Liam read posted comments and see one that says, ‘I’m coming after you, watch out, Hope’ with a skull and crossbones beside it.

Thorne and Liam deal with a threat.