Bill Takes Everything From Wyatt

Wednesday May 30, 2018: Brooke and Ridge argue about Liam's situation, Hope catches up with Steffy at the cabin, and Liam goes to confront Bill. 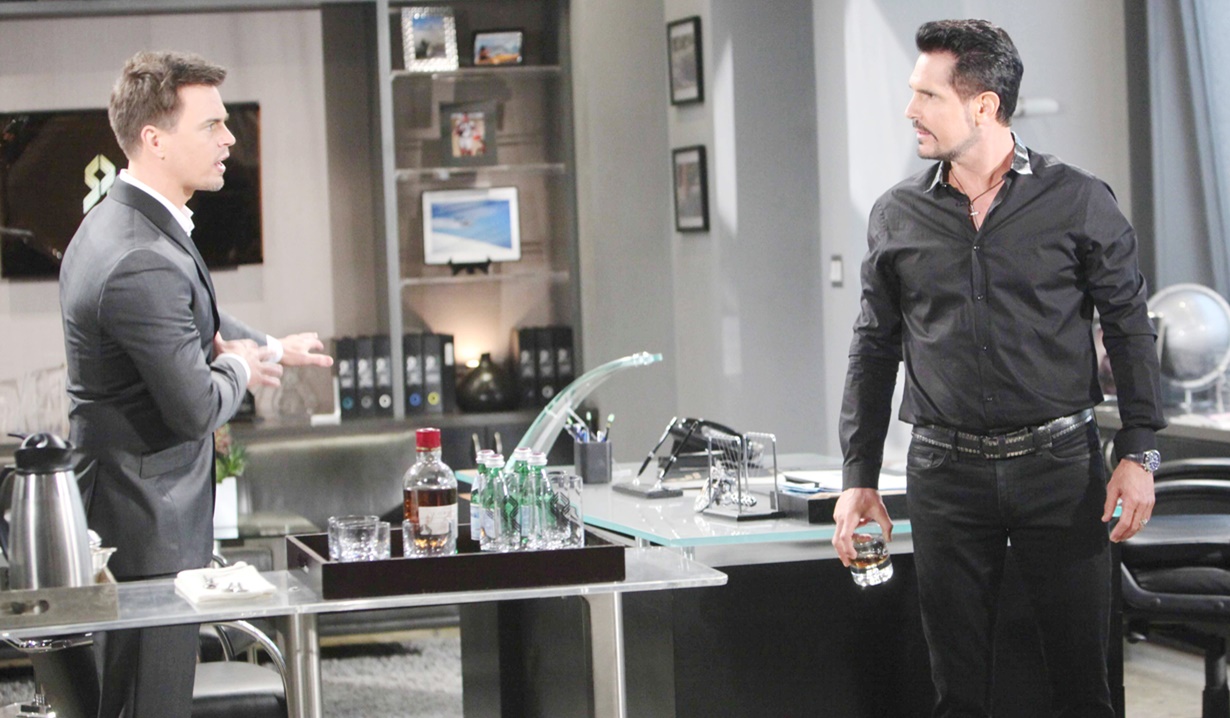 In Brooke’s living room, she, Hope, and Ridge continue to discuss Wyatt coming forward. Ridge thinks they should thank him. Brooke doesn’t think he had to interrupt the ceremony. Hope chimes in that Liam needed to know the truth – they’ll still be married, but on their own terms. Ridge relays that he let Steffy know what happened and encouraged her to talk to Liam. Hope rushes out. Ridge and Brooke keep bickering and can’t see each other’s point of view. Brooke insists Hope is Liam’s future.

In the cabin, Steffy makes an appeal to Liam to come home. She’s glad he now knows she doesn’t have feelings for Bill. Liam mutters about Bill turning all of their lives upside-down. She points out he didn’t get away with it – now things can be set right. Liam relays that Hope still wants to get married; though she was the one who called it off. Steffy thinks the truth changes everything. If he marries Hope, they’ll never be the family they were meant to be. Liam waffles. Steffy urges him to take time to think, and to wait on marrying Hope. Later, Hope arrives. Steffy says Liam went to confront Bill. Hope remarks on Steffy rushing over. Steffy points out that Liam was set to reconcile with her – now that the truth is out, he’ll be with her and the baby.

At Spencer Publications, Bill informs Wyatt he made the biggest mistake of his life. Wyatt doesn’t regret coming forward at all. Bill counters, “You will.” He taunts that now the car, the painting, the heir apparent – it’s all gone away, and for what? Wyatt replies, “For the truth, Dad.” He tells Bill he didn’t want his stupid toys, he wanted his respect. Bill snarks he should have done what he was told. Wyatt can’t believe he let Bill lure him in, and argues he’s shown more loyalty to this family than Bill ever has – he needs to learn what real loyalty means. Bill calls him a fool. Wyatt couldn’t lie to Liam. Bill sneers that he’s weak – neither of his sons are strong enough to run the company. He promises Wyatt gave everything up for nothing, because he’ll still end up with Steffy and Liam will still marry Hope. Wyatt throws the keys to the car and Bill lets him know he no longer has an office there. Wyatt informs Bill he’s sick – his thing for Steffy is an illness. Bill maintains he stopped the wedding, but he didn’t stop him. Wyatt calls him insane, and says he couldn’t live with himself lying. Bill declares, “No guts.” He orders Wyatt out. Wyatt’s done with him too. Later, Liam shows up to confront Bill about tricking him and Wyatt; using them as chess pieces in his creepy obsession with Steffy. Liam opines it’s sick to want to break up his granddaughter’s family. Bill counters it’s sick how Liam plays Hope and Steffy against each other. He mocks him for abandoning his pregnant wife and proposing to Hope. Bill intones that he’s the better man for Steffy.

Steffy has words for Bill.

Hope Calls Off the Wedding

Steffy Falls After Throwing Bill Out