Hope Learns Liam’s Decision Was Based on a Lie

Monday May 28, 2018: Wyatt apologizes to Liam, Ridge questions Katie, and Steffy receives a call from Ridge. 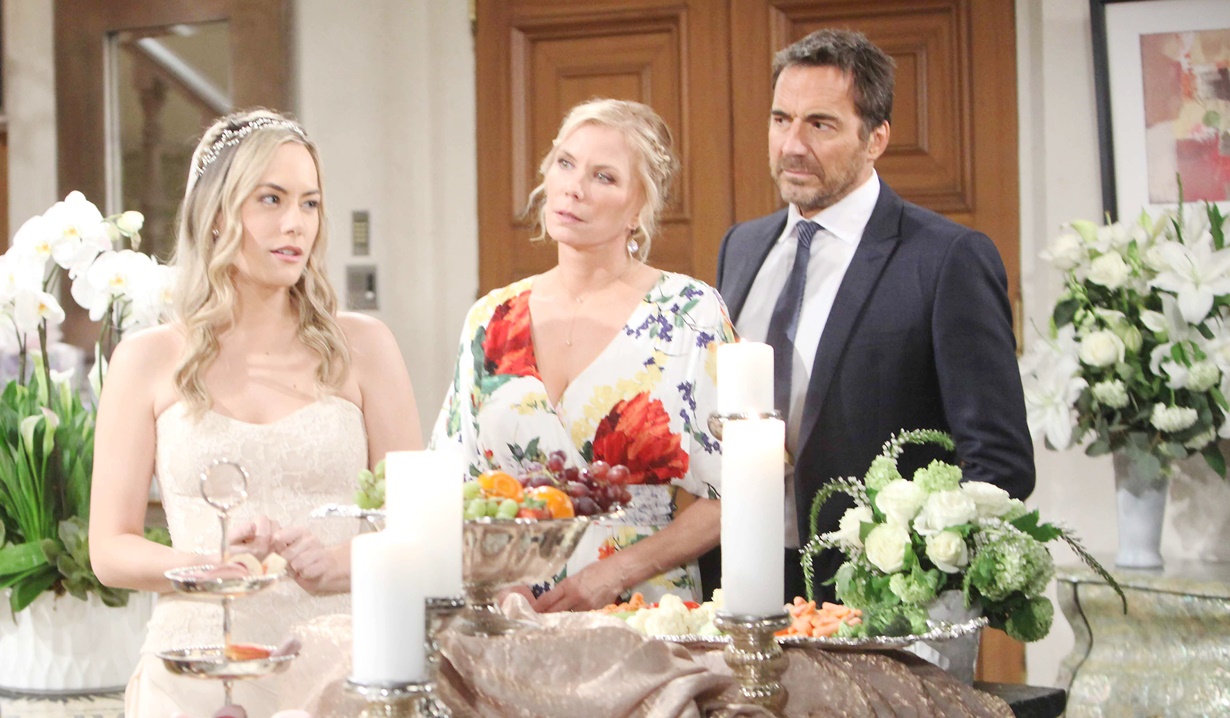 Upstairs at Brooke’s house, Wyatt strives to make Liam understand that Bill duped him into believing something was going on with Steffy; he conned him. Steffy has been totally committed to Liam and never stopped loving him. Liam groans, “Oh God,” as Wyatt explains that Steffy has been fighting for him, their marriage and baby. He wanted Liam to be able to choose based on the truth before he married Hope. Liam explodes at Wyatt dropping this on him when his bride is waiting. He asks Wyatt to reiterate his claim. Wyatt restates that everything he saw at the office was staged…nothing happened at his office…and Bill hugged Steffy because he knew Wyatt was watching. She was only there to buy the house for her and Liam. Wyatt relays that he confronted Bill, who wanted him to stay quiet. Liam grimaces, then learns Bill gave Wyatt the car and painting, and sneers at him for waiting until now to come clean. Downstairs, Brooke reassures Hope that she’s certain everything is fine and Liam and Wyatt will return soon. Ridge figures it’s all about Bill, who is a liar, and playing his boys again. Brooke cautions they shouldn’t jump to conclusions, while Quinn insists her son wouldn’t have halted the wedding if it weren’t important. Eric and Rick ask if Ridge knows something. Ridge states that Wyatt lied and Liam’s about to find out. Katie texts Wyatt to ask what’s going on, as Donna suggests putting on music. Maya doesn’t think it’s appropriate – it’s beginning to feel more like a funeral than a wedding. Thorne wonders Katie what she thinks the drama is about, but she steps away. Ridge joins her. He thinks Wyatt is telling Liam that Bill lied about an affair with Steffy, and asks Katie, “Am I right?” Eric reflects to Quinn on Liam’s dilemma and Quinn worries that Bill is behind all of this. Across the room, Hope tells Brooke something is wrong and tries texting Liam, who’s not responding.

At home, Steffy considers sending a text, and paces. Later, she takes a call from Ridge, who reports the wedding’s been stopped and Wyatt had something to tell Liam. He promises to update her.

Back at Brooke’s house, Hope decides to go find out what is happening. Upstairs, Liam chastises Wyatt for not telling him immediately. Wyatt groans that he bought into what Bill was saying and he didn’t know how to handle it. He tells Liam he can now make his own decision and apologizes. Hope appears and sends Wyatt downstairs. In the living room, Rick and the others grill Wyatt, who doesn’t know what will happen. He reveals Ridge has been right all along. Upstairs, Liam informs Hope that there was no affair with Bill and Steffy – his father staged it so Wyatt would see and tell him. Hope realizes Steffy was being honest, and that Liam based his decision on a lie.

Justin stands up to Bill.

Hope Calls Off the Wedding