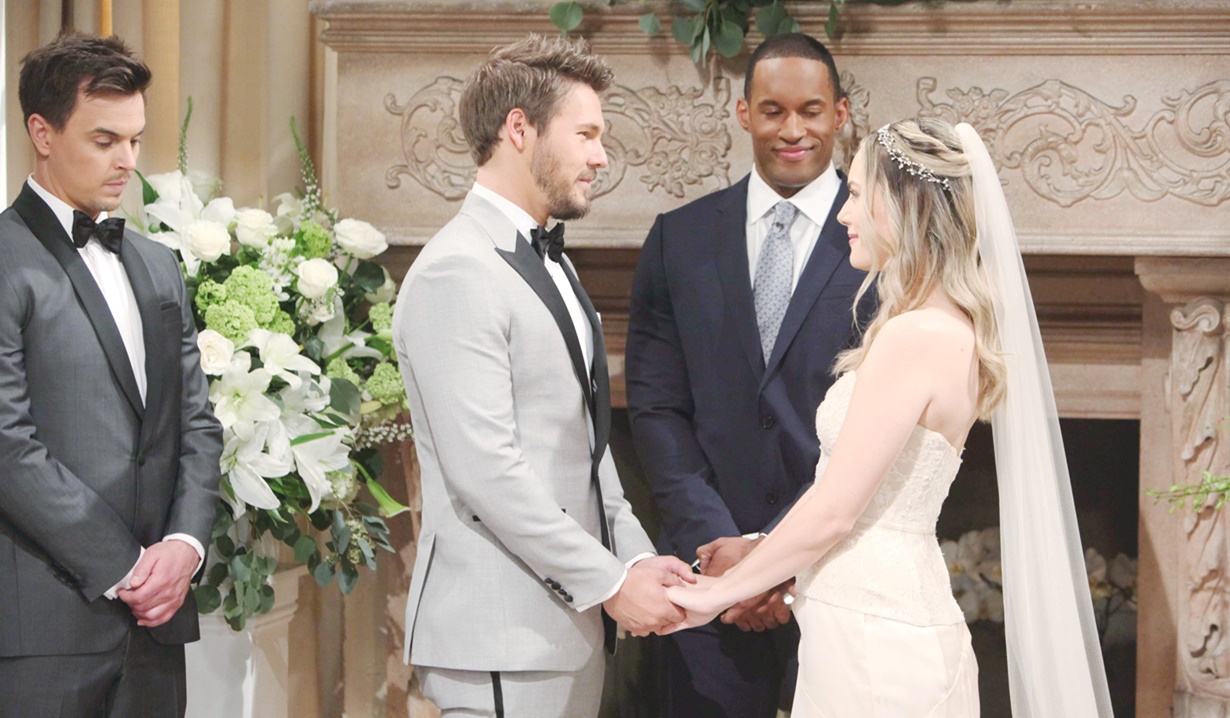 Hope descends the staircase at Brooke’s house and joins Liam at the altar. Carter begins the ceremony. Rick and Maya do readings, then Rick makes a speech to Hope saying how happy he is that she and Liam found their way back to one another. Brooke is prompted to speak, and tears up as she gushes about Hope looking radiant in her wedding dress, and thanks Liam for keeping her daughter so happy – he’s the love of her life. She feels their relationship is destiny, like hers with Ridge. Hope and Brooke embrace. Wyatt is called upon next. Wyatt speaks about his brother always being honest and doing the right thing – he doesn’t always do that, and should. Wyatt says he doesn’t feel worthy and awkwardness ensues until he adds that Hope and Liam’s love will be a constant. Carter asks if anyone has any objections. Wyatt looks tormented as he flashes through recent events, and suddenly tells Liam, “I have to talk to you…right now.” Wyatt and Liam step out, and the wedding guests speculate while Brooke reassures Hope. In the cabin, Liam’s furious and impatient. Wyatt blurts that it was a lie – there was no ongoing affair with Steffy and Bill. Liam reels as Wyatt explains Bill used him to break them up.

At Spencer Publications, Bill muses to Justin that all’s well that ends well – Liam will be with Hope and he’ll end up with Steffy. Justin issues another warning that Steffy would have nothing to do with Bill if the truth ever came out. He questions if Wyatt will actually stand there and say nothing at the wedding. Bill’s certain he won’t risk it since he’d lose the chance to have everything he ever dreamed of. Arguing ensues as Bill calls his scheme genius and insists no one gets hurt, and Justin counters that Steffy might disagree with that.

In the cliff house, Steffy wonders aloud to Taylor if she should go over to Brooke’s – she can’t let Liam marry Hope. Taylor relays that she’s spoken to Ridge and they both believe Bill is behind this lie. Steffy exclaims that she can’t prove it – she asked Bill and he denied it. Taylor becomes upset that they can’t do more because of Bill knowing she shot him. Steffy asks her to calm down, as Taylor starts in on Brooke. She seethes that Brooke is still a shameless manipulator…just like Bill. Steffy turns the conversation to the baby’s name. Taylor feels naming her after Liam’s mother speaks to Liam and Steffy’s connection. She knows Steffy won’t give up on her family. Steffy confirms she won’t; she loves Liam too much. However, she has to find a way to accept what’s happened and find joy with her daughter.