Thursday May 24, 2018: Ridge makes a final appeal, Taylor comforts Steffy, and Wyatt feels like a fraud. 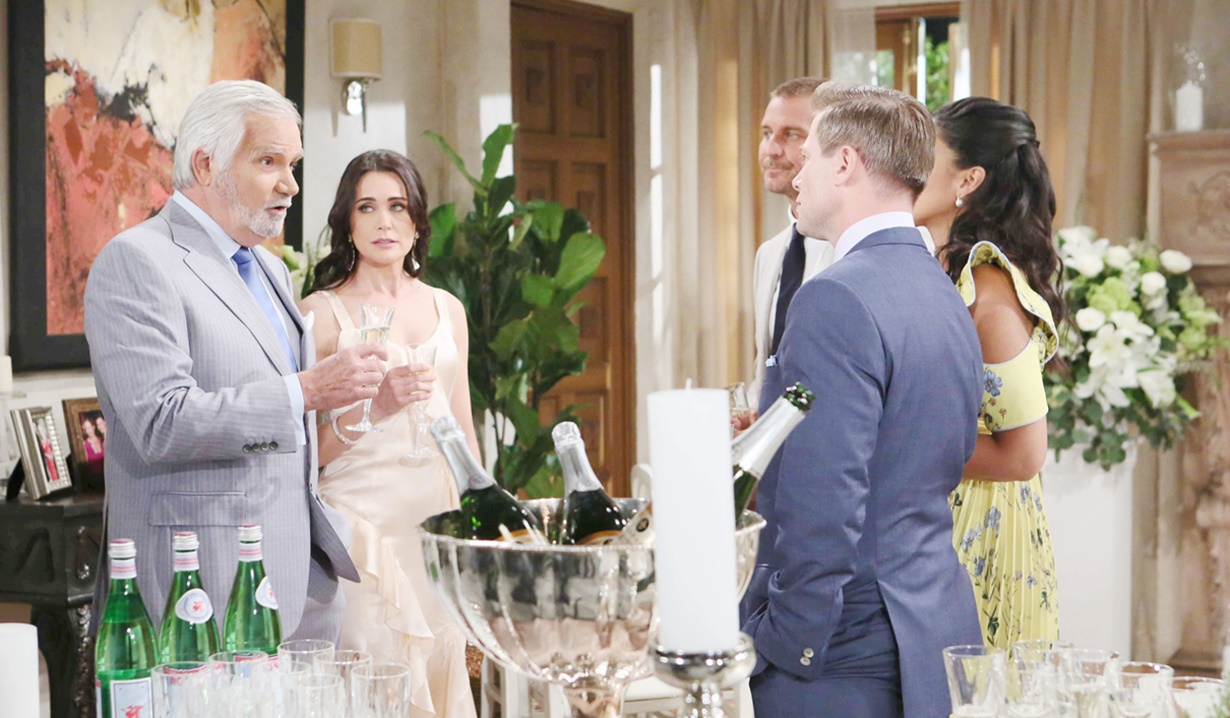 At Brooke’s house before the wedding, Brooke welcomes Katie and Wyatt before going upstairs. Katie assures a conflicted Wyatt he’s not doing anything wrong, but he’s concerned that Liam and Steffy deserve to know the truth. He complains about Bill trying to buy his loyalty. Katie can’t believe she’s saying this, but her ex might be right this time. Quinn and Eric arrive and greetings are exchanged. They exclaim about the happy day, but Ridge appears and can’t imagine what Steffy’s going through right now. Upstairs, Brooke enthuses to Hope about her wedding. Hope says all the obstacles make it sweeter. Downstairs, Thorne, Maya, and Rick have joined the others and titter about Brooke ‘the wedding warrior’s’ planning. Ridge expresses his opinion that this could have waited until after Steffy’s baby was born, and walks out. Upstairs, Katie and Donna give Hope a gift and she thanks the Logan women for all they’ve taught her, including how to love freely with her whole heart. Donna tears up as Hope talks about donning Brooke’s beautiful gown. They all share a Logan group hug. Downstairs, Carter arrives to officiate as the others speculate on whether Ridge will return.

In the cabin, Liam teases Wyatt for finally showing up for his best man duties. He ruminates that Wyatt and his bride are the only two people he can count on. Wyatt jokes that Liam had no one else to ask. Liam laughs, but says Wyatt’s really had his back lately. Wyatt comments that he really wants what’s best for him. Ridge appears to appeal to Liam one more time on Steffy’s behalf. He rehashes his assertion that Steffy wouldn’t have an affair with Bill and that Liam’s bought into a lie. Ridge pleads with Liam to give himself a little time, but Liam argues he has to step away from the betrayal. He asks Ridge not to ruin the day for Hope. After, Liam admires Ridge, but muses it doesn’t change the truth, which Wyatt saw with his own eyes. If Wyatt hadn’t told him, this wedding with Hope wouldn’t be happening. Liam joins the others in the main house and Rick welcomes him back to the family. Brooke embraces Liam happily. Wyatt confers with Katie about feeling like a fraud. Katie’s sorry, but pleads with him to let Hope and Liam stay happy. The wedding march begins and Hope makes her way down the staircase.

In the cliff house, Steffy cries to her unborn baby that it wasn’t supposed to be this way. She stops short when she hears someone enter, but it’s Taylor, not Liam. Taylor confirms she’s still in therapy, and asks her daughter what’s wrong. Steffy relays that Hope and Liam are getting married today. Taylor clucks that she must be devastated. Steffy can’t understand why Liam believes she’s still in love with Bill. Taylor surmises someone put something in his mind. Steffy will never give up on Liam and her family.

Wyatt Struggles With His Conscience...