Wyatt Struggles With His Conscience As Liam’s Wedding Nears

Wednesday May 23, 2018: Ridge argues with Brooke, Hope insists her wedding will happen, and Steffy asks Liam to postpone the nuptials. 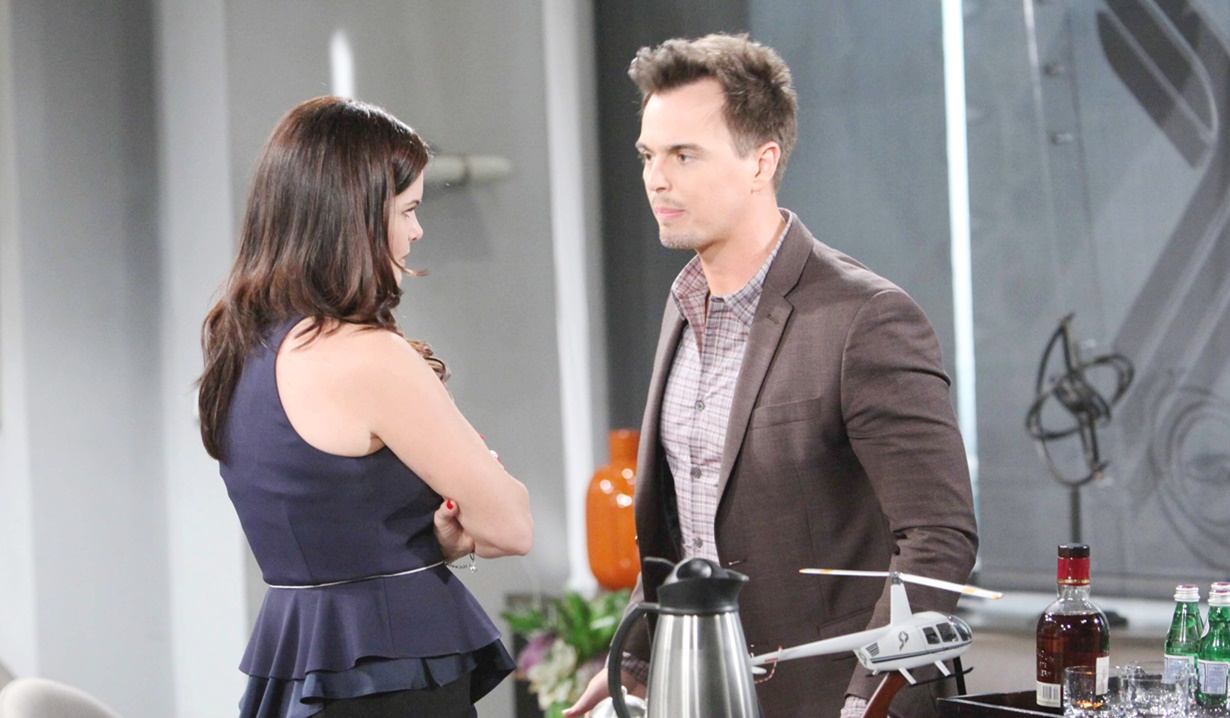 At Spencer Publications, Wyatt agonizes about being used – he thought Katie would understand. Katie agrees what Bill’s doing is despicable, but Hope and Liam have been cheated in the past. Wyatt counters that Steffy’s being cheated now, and there’s a baby involved – isn’t he obligated to speak up? Katie warns there’s a lot at stake and points out how easily he believed Steffy was betraying Liam. Wyatt stresses over Liam believing he can trust him. He feels like he’s selling his soul, but admits it’s been nice having his father’s approval. Katie hates that he’s in this position, but there’s nothing they can do, so they should let it play out. She tells Wyatt how happy Hope and Brooke are about this wedding. Wyatt wonders if Katie would be saying the same thing if Hope wasn’t involved. Katie concedes neither of them are impartial, but reiterates this is about what Steffy and Bill did. She feels Liam and Hope deserve the life they were robbed of by Steffy and Bill years ago. Wyatt frets about Steffy and Liam deserving the truth.

In the cliff house, Steffy enthuses that the baby likes her new name – Kelly Spencer. Liam makes noises about leaving – he can’t be there knowing his dad was just there. Steffy assures him that whatever he’s thinking about her and Bill, it’s not true. He’s the only man in her life. She asks him not to marry Hope. Liam feels they should just focus on the baby. He’s touched that he chose her mother’s name. Steffy thinks his mother would want them to be a family. She produces a wall hanging of them in happier times – she wants their little girl to see mommy and daddy in love. They recall the moment. Liam tells Steffy he’s grateful again, and she assures him he’ll be a great father, no matter where he’s living. Steffy questions how he can just marry Hope tomorrow when she’s carrying his baby. What can she do or say to make him believe nothing’s going on with Bill? Steffy feels he should wait if even a tiny part of him believes her.

At Brooke’s place, she and Ridge continue arguing about Liam’s upcoming wedding to Hope. Brooke insists it’s their time. Ridge asks how she can say that when his daughter’s at an ultrasound appointment right now. Brooke feels there’s no plot or conspiracy, he’s just not happy with Liam’s choice. Ridge reiterates that Liam’s being played. At the very least they should wait until the baby is born. Hope joins them and declares she’s not postponing her wedding. She adds Steffy had her chance but couldn’t stay away from Bill, and reminds Ridge of their interference in the past. Ridge states that Hope’s interfering now. Exasperated, Ridge repeats that Liam doesn’t have all the information. Brooke argues there’s no proof. Hope insists the wedding will happen tomorrow. Liam arrives, tells everyone about the baby’s name, and that Steffy asked him to wait – but the wedding’s still on.