Tuesday May 15, 2018: Brooke meets with a wedding planner, Liam toasts to Hope, and Taylor pays Brooke a visit. 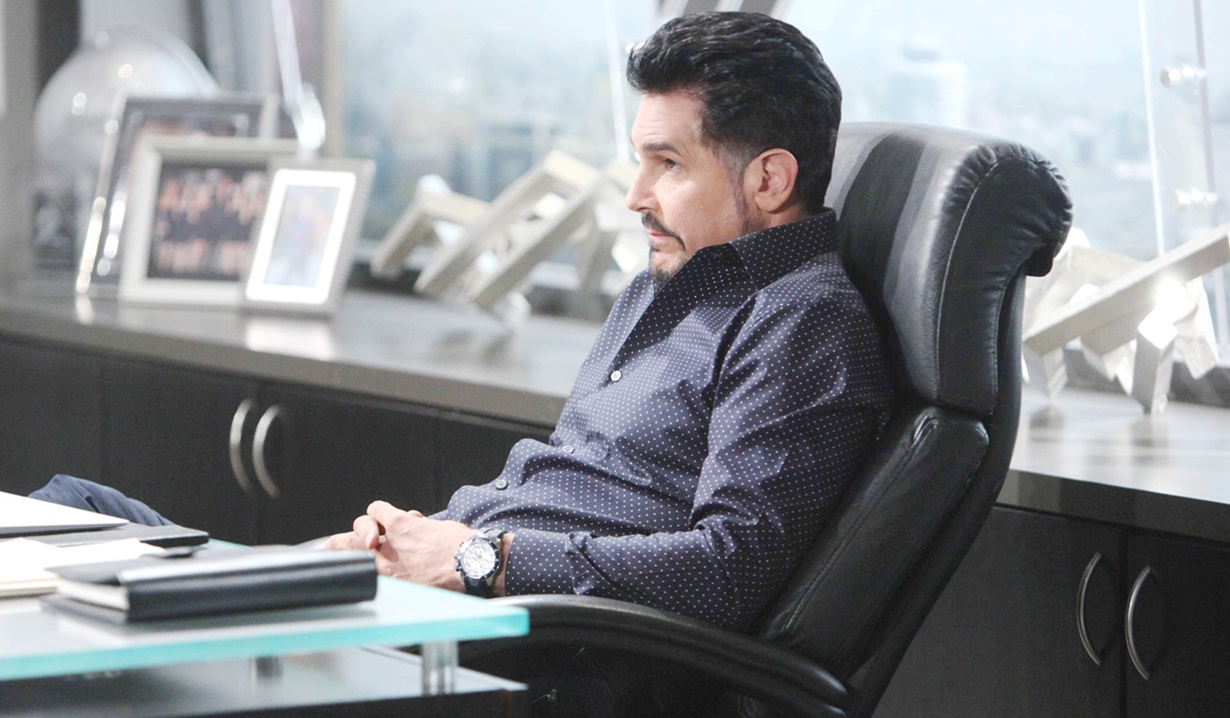 At Spencer Publications, Wyatt gapes as he listens to Justin rehash how Bill had him make it look like he had something going on with Steffy, and used Wyatt. He bursts in and demands to know if it’s true. Justin leaves, and Wyatt hisses, “Nothing’s beneath you, is it?” Bill mutters this should have happened long ago – Liam and Hope, and him and Steffy. Wyatt shouts there is no him and Steffy – she called their night together the biggest mistake of her life! Wyatt sneers at Bill’s ‘Spencer family values’ and spits, “You are sick!” They argue heatedly as Bill insists Liam’s happy. Wyatt reminds Bill his granddaughter’s involved, and that Steffy wants Liam, not him. He predicts once Steffy finds out what Bill did, she’ll never want anything to do with him again. Wyatt scoffs when Bill warns him not to interfere, and dangles the company. Wyatt can’t believe anything Bill says, and predicts this will blow up in his face. Bill hollers at him to be a loyal Spencer or he’ll forfeit everything. He physically stops Wyatt from leaving. “You are not going to Liam and Steffy.”

At Forrester Creations, Liam arrives as Rick, along with Maya and Thorne, is toasting to Hope’s happiness. Liam makes a toast to his wife-to-be and strokes her hair. Once alone, Hope relays that her mom wants the wedding to happen right away. Liam shares he already asked Wyatt to be his best man. He looks at Hope and sees love, peace, and stability. Hope says he can always count on her. Liam knows – he trusts her more than anyone.

In the cliff house, Taylor can’t get over Liam’s sudden change of heart. Steffy explains he thinks something’s going on with her and Bill again, then laments that Hope is in the picture now as his fiancée. Taylor deduces that Brooke is the one pushing for the wedding and exclaims, “Could that woman be any more unconscionable?” Steffy updates her on what Brooke said to her, and Taylor declares she’s not going to do this to her. She muses that Brooke is trying to seal the deal before Liam changes him mind and returns to Steffy – it won’t happen if she has anything to say about it.

At Brooke’s place, she meets with a wedding planner, (played by Marissa Jaret Winokur), and tells her she wants the day to be special since her daughter Hope has waited so long to be with Liam. The woman will need a few days, but Brooke stresses there are outside forces threatening the union and it must happen immediately. Later, Taylor arrives to complain to Brooke about her daughter interfering in Steffy’s marriage. Brooke warns her not to dare blame Hope. Taylor relays that Liam was coming back to his wife – does Brooke really want Hope marrying Liam on the rebound? Brooke agrees it’s messy, but opines that Hope should be carrying Liam’s child, which irks Taylor, who wonders if Brooke’s manipulated this. Brooke denies it.