Monday May 14, 2018: Brooke and Ridge argue, Hope shows off her ring, and Liam makes a request of Wyatt. 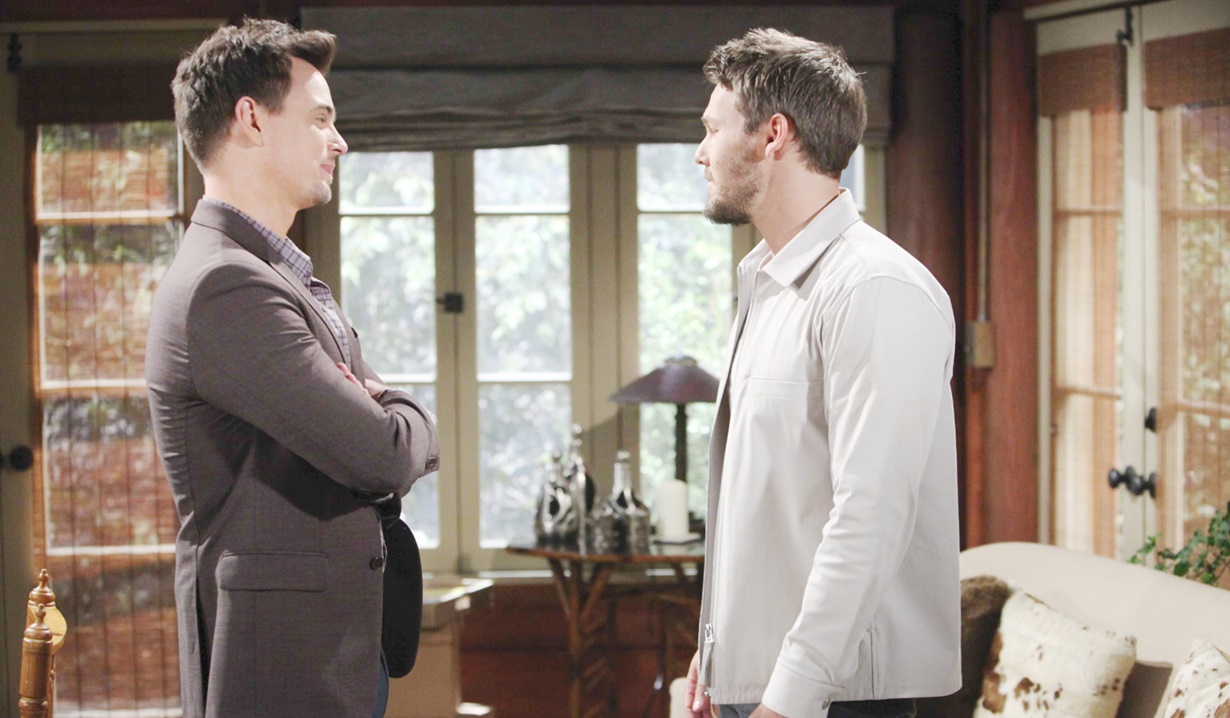 At Brooke’s house, Ridge can’t understand Liam changing his mind suddenly and rebounding to Hope. Brooke sees it differently – Hope deserves her happiness. Brooke warns they want to be wed as soon as possible and she’s on board with it. Ridge opines that it’s all built on a lie and contends that Liam’s being played by Bill, who will do anything to get Steffy. Arguing ensues as Ridge persists that Bill’s spun a web of lies; Steffy’s caught in it and so is her kid. Brooke hopes he’s wrong, but Ridge insists all roads lead to Spencer.

In the cabin, Liam thanks Wyatt for telling him the truth. They’re not surprised by Bill’s actions, but Wyatt still can’t understand Steffy betraying Liam like that. Wyatt questions if Liam’s really ready to marry Hope – what’s the rush? He is behind him 100% though, whatever he decides. Liam asks him to be his best man. Wyatt accepts. Liam relays that he and Hope are the only people in his life he trusts to tell him the truth. He reflects that it’s a little overwhelming – he loves Steffy, but wants to move on and put some honesty back in his life. Wyatt assures his brother he’d never lie to him, especially about his marriage. Liam tells him he did the right thing. Wyatt notes he didn’t actually see anything happen. Liam feels the scene was damning enough. Wyatt’s glad Liam will marry someone he can trust. Liam says Hope’s not the only one. The brothers embrace. They talk cheerfully about Liam’s daughter having two moms – he and Hope will build a future and never look back.

At Spencer Publications, a confident Bill chortles to Justin that everyone’s getting what they want. Justin warns about the lies and deceit. They rehash Bill’s plan, which needed Justin and Wyatt to accomplish it. Bill doesn’t want to hear any more about it – Hope and Liam will have a great life, and he and Steffy will conquer the world. Later, Wyatt arrives and listens at the door as Justin hollers at Bill about using one son to break up the other’s marriage because he wanted Steffy for himself, and warns him it’s bad, and there will be a price to pay.

At Forrester Creations, Hope shows off her engagement ring to Thorne, Maya, Rick, and Emma. Rick teases it’s a retread. He hopes Liam realizes how lucky he is. Hope reveals Brooke is letting her wear her wedding dress and it will be at the house – her mom wants then to wed right away. Rick asks about the proposal and Hope relays it was unexpected, but beautiful. Talk turns to Brooke’s support, and Hope notes Ridge has concerns. The group enthuses it will be a beautiful wedding and a great party. Rick’s glad to see Hope get some happiness. Thorne wonders how Ridge’s handling things – it must be tense with Brooke. Hope gushes she’s just wanted a future with Liam for so long, and now she gets to have it.