Wednesday May 9, 2018: Ridge smells a rat, Hope and Liam have news for Brooke, and Liam pays Ridge a visit. 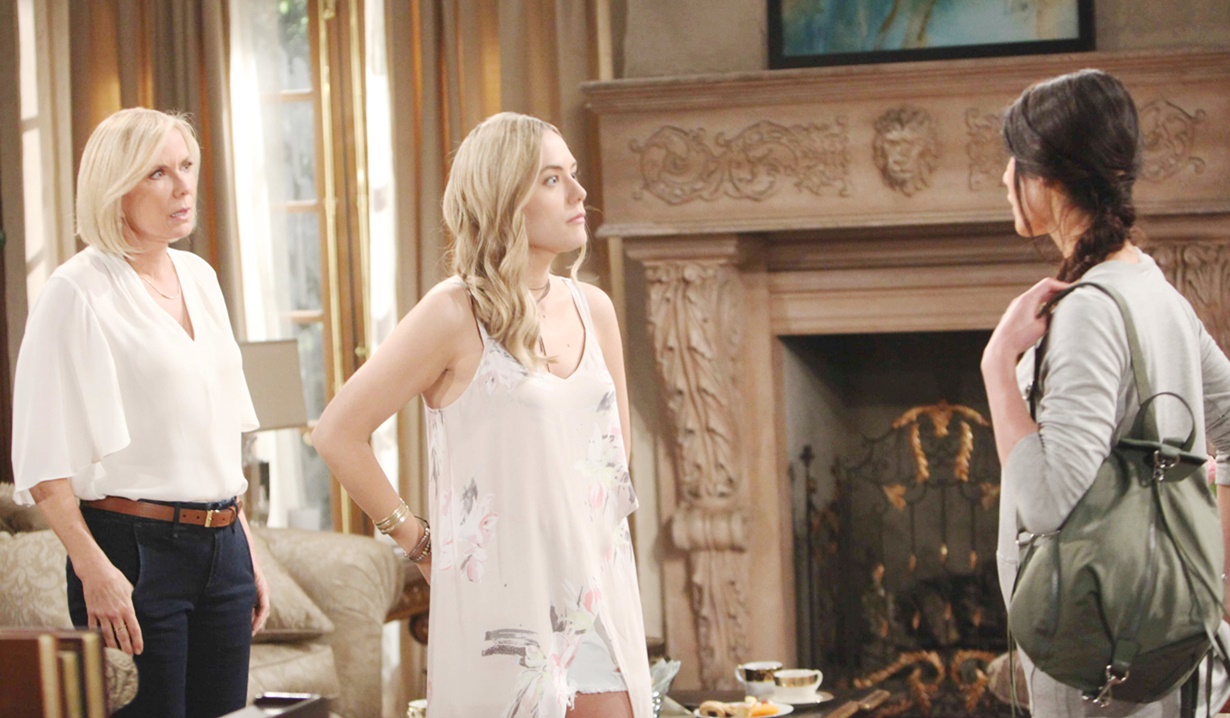 In today’s The Bold and the Beautiful recap…

Ridge arrives at the cliff house as Steffy’s leaving Liam a voicemail. She explains to Ridge that after sending the flowers, something made him doubt her. Ridge can’t understand any of it. Steffy’s afraid of what Liam will do if she doesn’t get through to him. They agree Liam didn’t just walk away because she hugged Bill. Ridge feels this has Spencer’s name all over it – this is Bill trying to sabotage her marriage. Steffy reveals he showed up and made another pitch. Ridge hollers that he’s obsessed with her! They circle back to someone putting doubt in Liam’s head. Steffy doesn’t have time to figure out what happened, and is concerned Hope will see this as an opportunity.

In Brooke’s house, Hope finds Liam perusing the annulment papers and tells him it’s alright if he’s having second thoughts. Liam is determined to put this behind him, and says the messenger is coming. Hope walks away, and Liam flashes to the best times with Steffy before recalling Wyatt’s warning that Steffy and Bill were still together. He signs the papers and hands them over to the messenger at the door. Brooke appears. She lets Liam know that Ridge told them what he decided. Hope enters, and together, she and Liam let her mother know they’re engaged. Brooke stammers that it’s unexpected but wonderful, then asks about Steffy. Liam says he realized you can’t repair a relationship when someone else is involved. Brooke guesses, “Bill.” Liam goes on that everything in his life has changed except how he feels about Hope. He promises it’s not a rebound. Rick and Maya arrive, learn of the engagement, and congratulate the couple. Rick relays his fears about his sister being a rebound, and Liam reassures him. Talk turns to Steffy, who doesn’t know yet, and Ridge. Brooke sighs – she’ll get him to understand. Liam insists he should tell him, and exits. After, Brooke tells Hope it’s a complicated situation – Liam was planning to go back to Steffy, and now they’re engaged. Brooke’s sure it will work out. They’re embracing when Steffy bursts in. She talks to Hope alone and explains she and Liam were on the verge of reuniting – she needs Hope to talk to him. Suddenly, Steffy spots Hope’s ring. Hope announces she and Liam love each other and they’re getting married. Steffy reels, and gasps, “What?” Liam arrives at Forrester Creations and bickers with Ridge about whether his marriage to Steffy is over or not. Liam reveals he filed the annulment papers this morning. He further explains he needs trust and honesty, then announces he proposed to Hope.

Brooke, Maya, and Rick listen in on an argument.