Tuesday May 8, 2018: In today's The Bold and the Beautiful recap, Hope gives Liam something special, Justin's skeptical of Bill's plot, and Steffy breaks down. 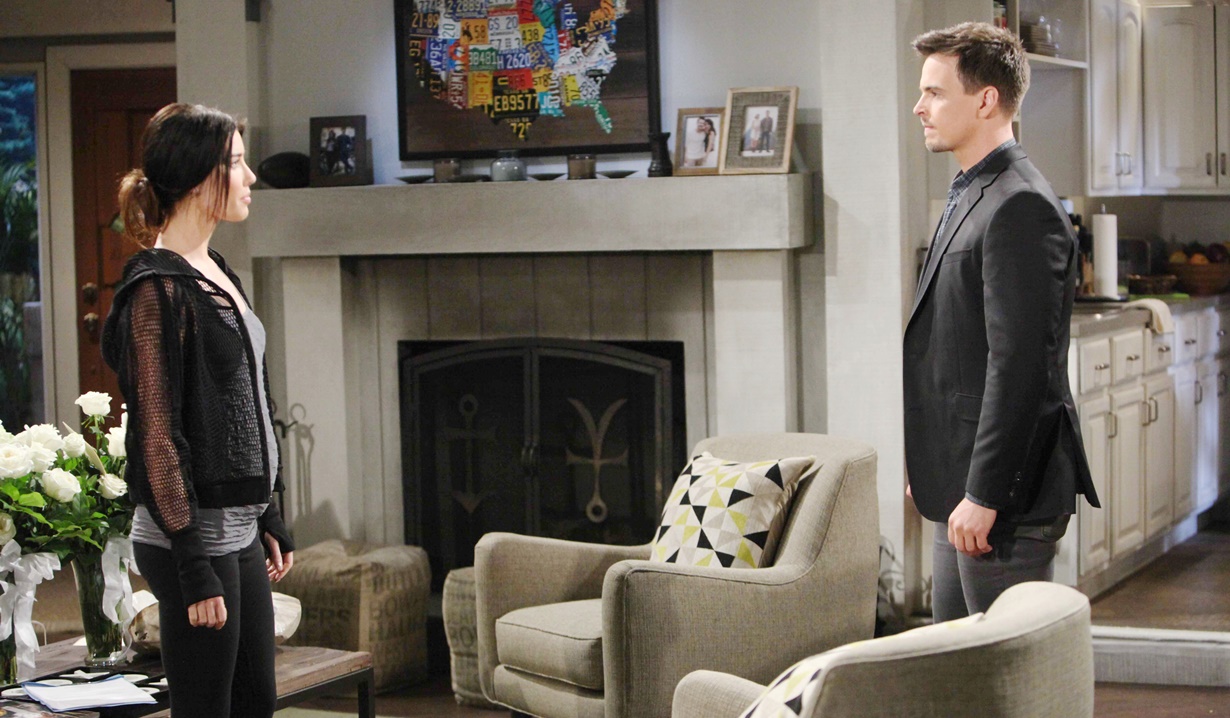 In the cabin, after making love, Hope and Liam talk about getting married. Hope can’t wait to be his wife again. Liam remarks it feels so good to hold her again; they’ll have a lot of nights like this. Hope snuggles up to his shoulder and they kiss. They continue to discuss their impending marriage – they may need a few days completely alone in the cabin for it to sink in.

Hope mulls about planning another wedding and recalls when Bill fought to keep them apart. She’s excited for the new beginning, and Liam declares it’s the last time – he’s never letting her go again. He wants to go buy a ring, but Hope announces she’s leaving and will be right back. When she returns, Hope has the engagement ring he gave her previously. Liam thinks she’s amazing, and they agree to have a small wedding at the house. Liam feels Hope will be a great stepmom and maybe one day they’ll give his daughter a brother or sister. They laugh about getting ahead of themselves. Liam proposes again and Hope accepts.

Wyatt arrives at the cliff house after receiving a text from Steffy, who wants him to convince Liam there’s nothing going on between her and Bill. She’s confused, and can’t understand why he thinks she’s with Bill. Wyatt flashes to Bill embracing Steffy and asks if she’s been with Bill since that night. Steffy, irritated, replies, “Of course not.” Wyatt thinks maybe this is a good thing, but Steffy argues she’s pregnant with Liam’s child and he was about to forgive her before something happened. Wyatt questions her about seeing Bill. Steffy explains she went to get the house papers signed and hugged Bill, but there was nothing else. Wyatt’s expression turns stormy. She wonders what he’s not telling her and questions if Bill could have gone to Liam and told more lies about an affair going on. Wyatt says his father hasn’t talked to Liam – no lies there. Steffy begs Wyatt to please help her. Wyatt is affected when she breaks down and insists she wants nothing to do with Bill. He leaves Steffy in tears.

At Spencer Publications, Justin bickers with Bill about his interference in Liam’s marriage. Bill insists Liam and Hope are meant to be together, and now is their chance. Justin can see this all blowing up in Bill’s face. Bill says he’s doing this because he got shot in the back – life is too short. Justin complains it’s all based on a lie and he’s using Wyatt to destroy Liam’s marriage. Bill really believes this is the right thing to do. Justin is skeptical. Bill says it might take time with Steffy, but he won’t give up. Justin reminds him she’s having his son’s child. Bill muses that he’s probably with Hope as they speak.

Ridge shares a theory about Bill with Steffy.