Monday May 7, 2018: In today's The Bold and the Beautiful recap, Bill implores Steffy to start over, Wyatt shares an opinion with Justin, and Katie and Wyatt discuss Bill and Steffy. 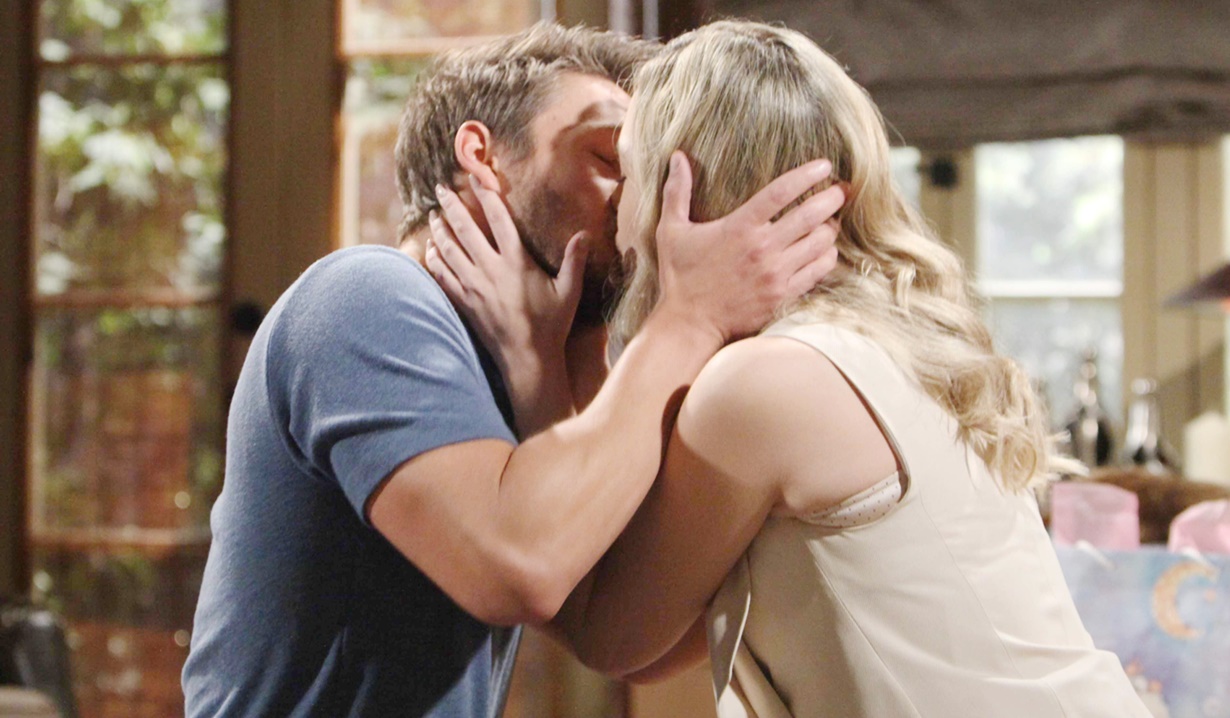 In the cabin, Hope can’t believe Liam has proposed; she never stopped loving him. They kiss. Hope was okay with being his friend, but still loved him. Liam agrees he still felt the connection when she walked into his hotel room. Hope enthuses about being his wife – this time nothing will come between them. She tried to move on in Italy, but no one was…him. Liam wants to make a new set of memories. They kiss and agree they find their peace looking into one another’s eyes. Liam knows she’ll never let him down. Hope feels they’re meant to be. They express their feelings and make love. After, Hope says it was everything she thought it would be and more. Liam will be so proud to call her his wife. Hope predicts they’ll have a wonderful life together. Liam muses that she embodies everything good, and she’s trustworthy. He tells her, “You are what I need, now and always.”

At the cliff house, Bill urges Steffy to walk away from her stagnant life – his son doesn’t deserve her. Steffy asks him to stop. Bill implores her not to let Liam play her against Hope. Steffy wants to know why Liam still thinks they’re involved. He continues to say she can’t win against Hope. Steffy pleads with him to stop talking. He won’t. Bill suggests they start the life they should have had years ago and let Liam and Hope do the same. Steffy wants Bill to drop this, and is irked when he alludes to Liam’s mental instability. Bill talks about their beautiful, honest night together. Steffy says it was the biggest mistake of her life. Bill argues she doesn’t really believe that. Steffy reiterates there is nothing going on between them – it was one horrible night. Bill reports he renamed the Stella Maris for her – Stephanie. Steffy doesn’t want to hear it – she’s going to have a life with Liam. Bill intones she’s wasting her life on a man who’s not worth it. Steffy orders him to go, and reiterates she’ll fight for her marriage – Liam’s the only man she wants.

At Spencer Publications, Wyatt studies Justin, then says, “You know, don’t you?” Justin presumes he’s talking about Bill and Steffy. Wyatt can’t believe it’s still going on. He’s not surprised Bill would do something so horrific, but cannot understand how Steffy could betray Liam again. After, Katie arrives and canoodles nervously with Wyatt, who assures her Bill’s not there; he’s probably with Steffy. Katie finds the situation gross and shocking. Wyatt insists she not confront anyone. Katie asks how Liam took it. Wyatt reports he was devastated. Katie doesn’t think it makes any sense. Wyatt can’t believe Steffy would do this to Liam again. They kiss, and Katie plans to go home and get ready for Wyatt to come over later. Wyatt’s still distracted and decides Liam’s much better off without Steffy. Later, Justin finds Bill stewing in his office. He figures Steffy sent him packing because she wants Liam. Bill’s certain Liam will end up with Hope – he’s righting a wrong.

Steffy makes a request of Wyatt