B&B Recap: Liam Confronts Steffy About Being in Bill’s Arms 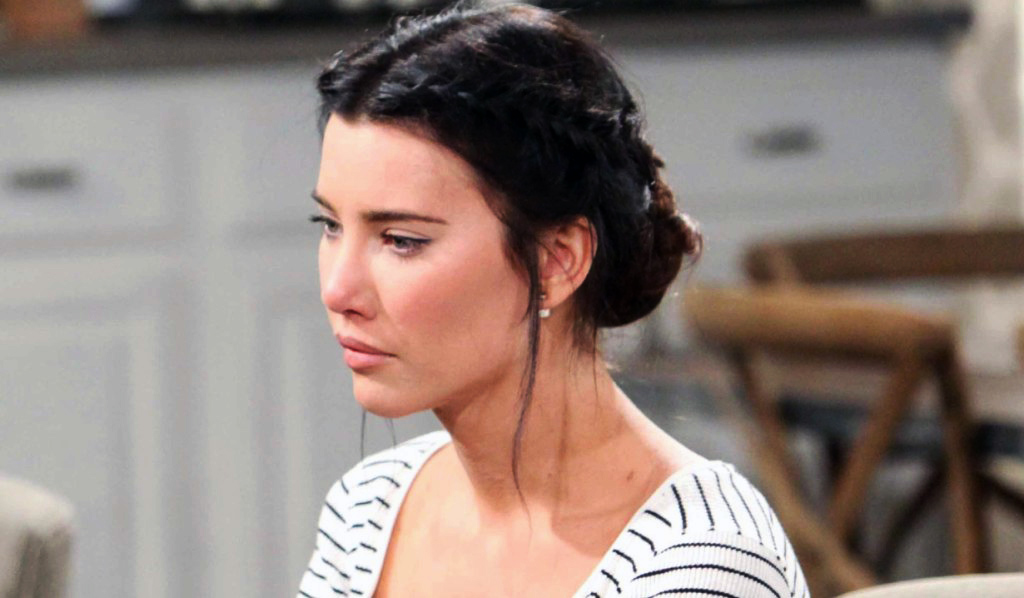 In the cabin, Wyatt insists to Liam that he saw Bill and Steffy in each other’s arms outside the office…and there’s more. Liam’s in disbelief and warns Wyatt about misleading him. Wyatt wishes there was a chance he was wrong, but there’s not; Steffy and Dad are still together. Wyatt repeats the phone conversation he heard, then tells him about finding the ‘aftermath’ with candles and lipstick on pillows. He doesn’t know how Steffy could do this to Liam, but it’s still going on. Liam, deflated, murmurs, “This can’t be happening. She loved me, not Dad.” When Wyatt searches for whiskey, Liam leaves.

At the cliff house, Steffy enthuses to Taylor that Liam’s coming home and they can finally put everything behind them that happened with Bill. More flowers arrive. The cards say ‘Here’s to parenting,’ ‘Here’s to our future,’ and ‘Here’s to our family’. Steffy tells her mom she couldn’t give up on them, and she knew deep down that Liam couldn’t either. Talk turns to Bill. Taylor wonders if he’ll accept this. Steffy doesn’t care what he thinks – she hasn’t been this happy since she found out about the pregnancy. Taylor’s proud of her daughter. She wishes Steffy a great evening and leaves. Soon, Liam arrives. Steffy gushes tearfully about the beautiful flowers and cards, and what it means to have him there. Liam muses that he sent white roses because they symbolize new beginnings. Steffy senses something’s wrong. Liam says he sent them before he found out something. He asks if she saw his father last night. Steffy confirms she did – he sold her the house. Liam asks if she touched him or found himself in his arms. Steffy flashes to Bill’s embrace and says there was a hug. Liam snaps his fingers. He was ready to reunite until he found out she was in his father’s arms again last night.

At Spencer Publications, Justin calls Bill out for making Wyatt believe something happened between him and Steffy when that’s not the case. Bill retorts, “Steffy belongs with me, and she’s going to end up with me. Period.” Justin warns he’s going down a dangerous path and could lose everything. Bill argues he’s merely righting a wrong – keeping Hope and Liam apart. They continue to argue. Justin reiterates Bill could lose both of his sons and not even end up with Steffy. He urges his boss to let things happen organically, but Bill protests he’s in love with Steffy, who needs him. The stress she’s under isn’t good for the baby. Justin reminds, “Liam’s baby.” Bill insists Liam will one day thank him for being there for Steffy – it will all work itself out. Later, a disgruntled Wyatt returns and Bill tells him he and Steffy are the real deal. Wyatt reveals he told Liam everything. Bill wonders how he took it. Wyatt says he was like a man who lost the most important thing in his life.

Liam arrives at a decision.