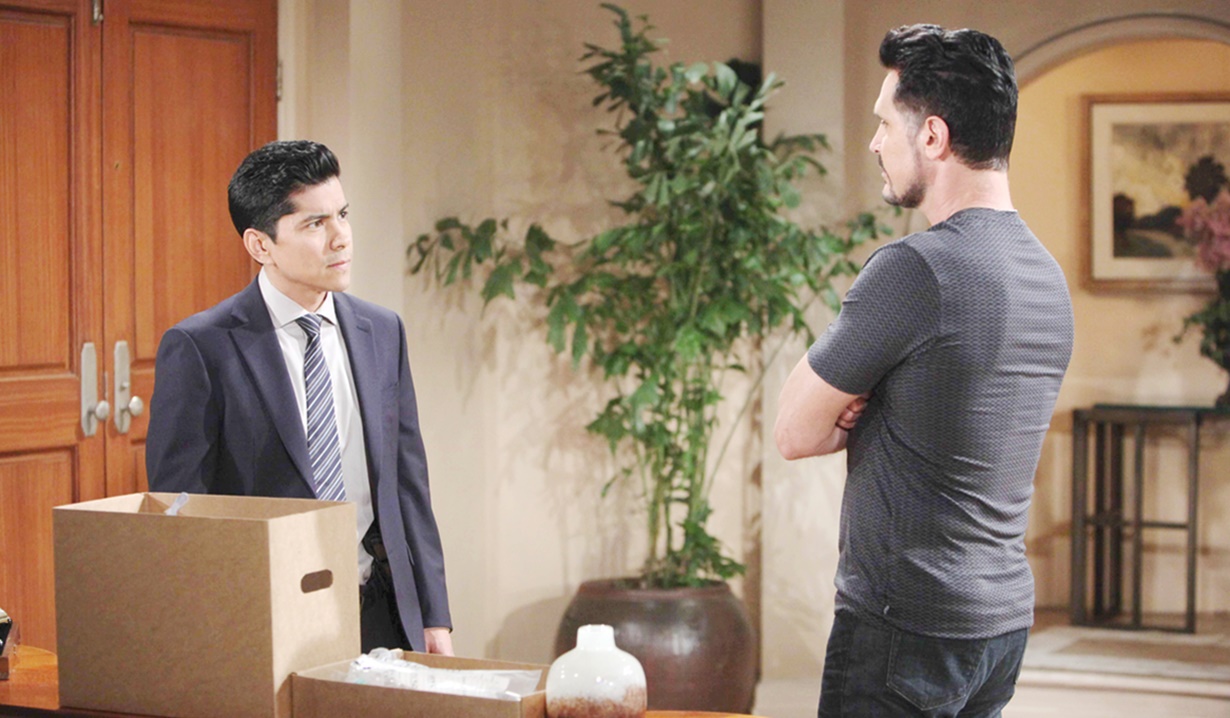 At Forrester Creations, Ridge talks about a meeting, but Steffy’s distracted. He asks about the baby, and if Liam’s any closer to coming home. Steffy shrugs and says, “Ask Hope.” She explains Hope thinks she should leave Liam and get together with Bill. Ridge is flustered to hear that Hope admitted she’s still in love with Liam. Steffy muses that something’s changed, and adds that Hope wants to spend more time with Liam, working on her line, which makes her uncomfortable. She just doesn’t need Hope interfering. Ridge decides he’ll talk to Brooke and Hope, because Steffy’s marriage is on the line. In the design office, Liam tells Hope he can’t stop thinking about what he did to his father; he should be turning himself into the police. Hope stammers about the concussion. Liam says the concussion explains it, but doesn’t excuse it. He decides he needs to tell Steffy he shot Bill and assures Hope she would never say anything. Hope warns Steffy could get dragged into the investigation and doesn’t think he should risk it – she is there for him whatever he needs. Liam appreciates her concern, but still wants to tell the truth. He exits, and meets Steffy in the corridor. He joins her in the office, where she realizes he is not okay. Liam admits something’s changed and he’s seeing himself in a whole different way. Steffy’s confused. Liam confides he did something even more horrible than she did to him. In the design office, Ridge confronts Hope. He believes she knows something about Liam that he and Steffy don’t. Ridge’s phone goes off and he muses that he missed a text. He says, “The eagle has landed. I wondered when she’d get here.” Meanwhile, Liam rambles and tells Steffy about witnessing the proposal, tripping and getting a concussion, driving to Bill’s, and shooting him. Steffy’s floored.

In Bill’s house, Detective Sanchez is curious when Bill expresses doubt that the shooter will return and try again. He grills Bill about his story, and then pulls out the golden gun. Bill asks what he’s doing. Sanchez wants to help him remember exactly what happened the night he was shot, and unboxes the rest of the evidence to re-enact the crime scene. Bill barks that he’s very clear about what happened, but Sanchez isn’t buying a stranger decided to do target practice for the hell of it. He asks Bill, “Is there something you know that I don’t?” Bill flashes to Liam’s confession, but keeps mum. Sanchez boxes up the evidence, takes a call, and leaves. Later, Bill is startled when Taylor, (played by Hunter Tylo), walks in. She calls Bill a horrible man – Ridge told her everything that he did to Steffy. Bill protests, but Taylor seethes that she’s a psychiatrist and knows predatory behavior when she sees it! She rages, “You are a horrible man!”

Steffy makes a request of Liam.