Friday March 9, 2018: Thomas returns with an apology for Sally, Ridge believes he knows who shot Bill, and Katie and Wyatt reveal their engagement. 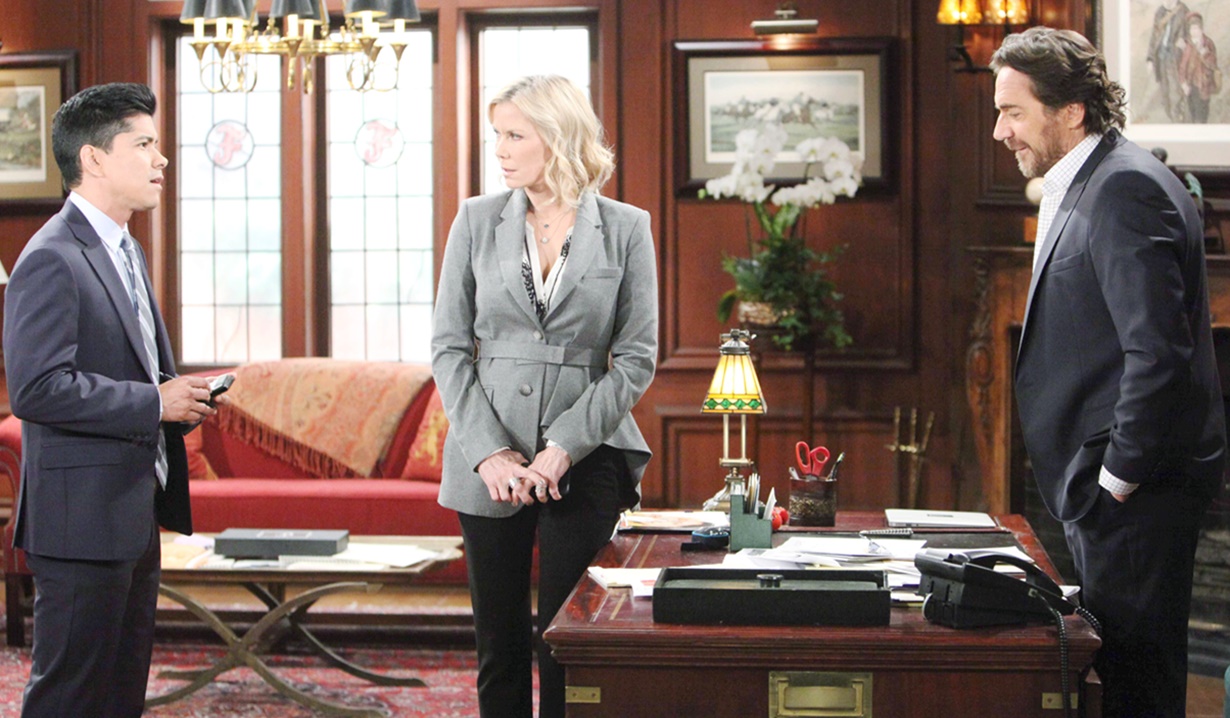 At home, Ridge tells Brooke he didn’t shoot Bill, but would love to thank the person who did.

In Bill’s hospital room, he grimaces and Liam asks, “Dad? Can you hear me?” Bill remains unresponsive. In the waiting room, Wyatt informs Katie as angry as he is with his father, he would never try to kill him. Hope arrives at the hospital as Liam emerges from Bill’s room. Katie reveals that Bill was suing her for full custody of Will. Everyone wonders why, so Wyatt and Katie announce they’re engaged, which didn’t go over well with Bill. Hope, Liam, and Steffy are happy for them. Wyatt goes in to see Bill. He tells him things got way out of hand and he’s sorry. After, Liam tells Hope and Steffy it’s good Wyatt went to look after the company.

At the police station, Lt. Baker updates Detective Sanchez on the years of bad blood between the Forresters and Spencers. Sanchez takes a call from Justin, who wants the legal documents. Sanchez sniffs that they’re evidence; he’ll get them when he gets them. An officer reveals the license plate of a car seen driving away from Bill’s house the night of the shooting. Sanchez muses he’ll have to visit the Forresters.

Thomas enters Bill’s office, where Justin informs him Dollar Bill’s been shot and he’s running the company now. Thomas rants about what Bill did to him and Sally – Caroline admitted everything to him. Justin snarks that he’s too late to complain about Bill, and suggests Thomas talk to Sally, who threatened his boss with a gun just last week. Later, Wyatt shows up, and questions Justin being in Bill’s chair. Justin says Bill disowned Wyatt; he’s in charge. Wyatt muses about how comfortable he seems. Justin puts his feet on the desk. Wyatt thinks Justin shot Bill.

Sally opens her door to Thomas, who asks to come in. Sally asks about New York and Douglas. Thomas can see how much he hurt her – they had something special. He regrets how he handled things. Sally wonders about Caroline’s health. Thomas says she’s remarkably healthy and reveals that Bill lied about Caroline dying to drive them apart. Sally is shocked at the duplicity. They discuss Bill’s shooting. Thomas hates him. Sally replies, “Not as much as I do.” She runs down her list of grievances. Thomas feels like an idiot. Sally seethes that Bill took everything from her. Thomas asks, “Did you shoot him?”

Detective Sanchez arrives at Forrester Creations, notes Ridge’s black eye, and says his car was linked to Bill’s house. Ridge admits he was there and Bill hit him. Sanchez wonders if he retaliated. Ridge denies it and runs the detective off. Sanchez warns him not to take any last minute trips. After, Brooke reels, and Ridge decides he knows who shot Bill. Katie arrives to update Brooke on Bill, and she confides that Ridge thinks he knows who the shooter is.

At Il Giardino, Ridge says to Sheila, “You tried to kill Bill. It was you, wasn’t it?”

Sheila and Ridge Accuse One Another...

‘AGT’ Recap: Archie Williams Wows The Judges & Sofia Vergara Tells Him That He Deserves To Win