Ridge Urges Liam Not to Let Bill Live His Life

Friday January 26, 2018: Bill declares his love for Steffy, Liam reluctantly hears Ridge out, and Hope discovers why Liam and Steffy broke up. 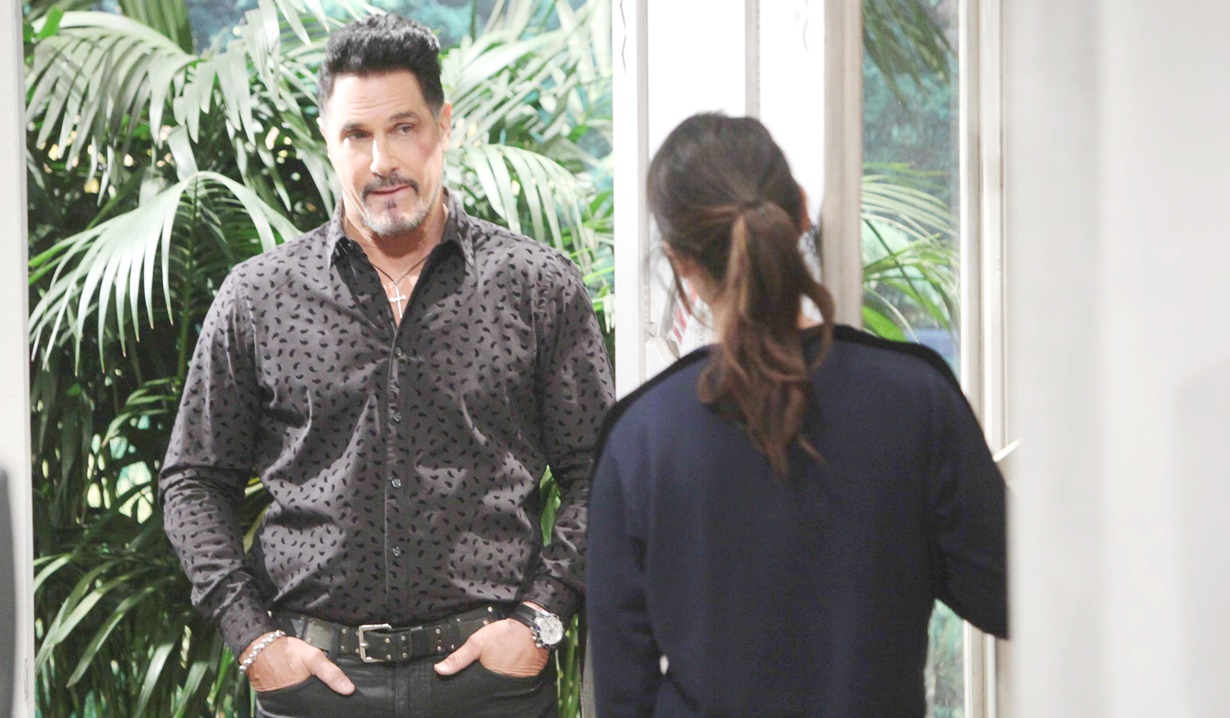 Bill shows up at Steffy’s door, where she laments the state of his face. He shrugs that he would have done the same thing in her father’s place. Bill learns Liam presented Steffy with annulment papers and expresses disappointment. However, he’s not willing to live the rest of his life in shame, and asks if she is. Steffy reports that she will beg or do whatever it takes to reconcile with Liam, but he told her he’d never take her back. She adds the sight of her makes Liam sick. Bill intones that maybe the sight of her carrying his child will settle his stomach. He suggests she sign the annulment papers and start making the baby her priority. Bill rehashes that he loved her first and locked his feelings away – he’s willing to be a loving grandfather to her child, but could be a loving stepfather too. He tells Steffy he is there for her, she is not alone, and he loves her.

In the hotel room, Liam is thinking about Steffy when Ridge arrives carrying a case of beer and announces, “I know what your father did.” They start discussing the situation and Ridge wonders if Liam is going to let his father get away with it. Liam isn’t up for the conversation, but Ridge feels he needs to have it. He opines that Bill’s actions were revenge on the two of them, and warns Bill wants to live Liam’s life. “Don’t let him take it from you.” They bicker after Ridge says he’ll call the cops on Bill. Liam states Steffy knew what she was doing. Ridge rakes over Liam’s dark history with Bill and insists Steffy needs his help. He urges Liam to be the husband and father Ridge knows he can be. Liam agrees to consider Ridge’s words, but asks him not to bully him. Ridge knows what he wants and says, “Go to her.”

At Brooke’s place, Hope reveals to her mother that she knows Steffy’s pregnant. Realizing Brooke already knew, Hope complains about being treated like an outsider. Brooke says it wasn’t her news to tell. Hope wonders what led to Liam walking out on his pregnant wife – it had to have been catastrophic. She observes that it’s clear Steffy broke Liam’s heart, and her own as well in the process. Brooke recalls that people thought Taylor could do no wrong, but when she fell, she fell hard and muses, “Like mother, like daughter.” She clarifies that Steffy didn’t have an affair, but committed an indiscretion. Hope says Sally really didn’t know what she set in motion. She thinks Liam will forgive Steffy, but Brooke doubts it will ever happen. After a remark about family, Hope guesses that Steffy hooked up with Bill. She becomes tearful and upset for poor Liam, and blurts, “I never should have…”

Bill presses for a life with Steffy.