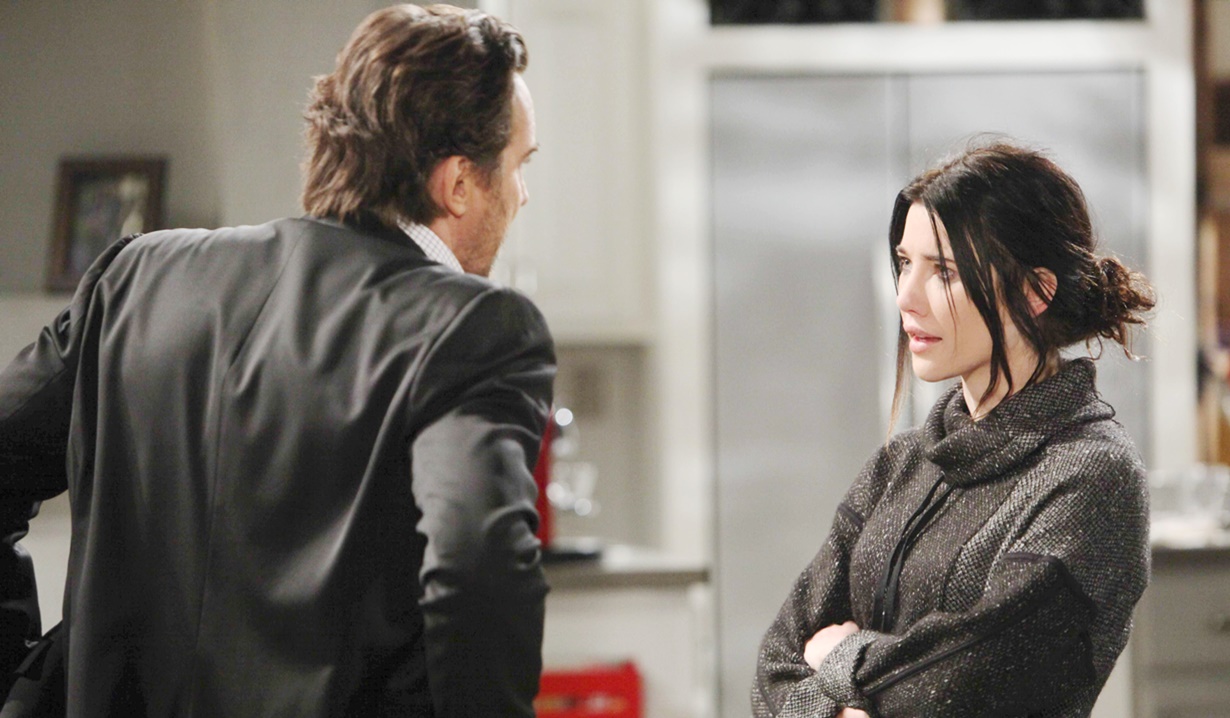 At Spencer Publications, Bill and Brooke debate over whether or not Steffy will confide in Ridge. Brooke muses it’s almost like Bill doesn’t want her to. Bill feels it’s none of Ridge’s business – it’s between Liam and his wife. Brooke counters that none of it makes sense – she doesn’t understand why Liam walked out. Brooke asks Bill if Liam confided in him and figures something or someone has come between them. Justin enters, and remarks he’s surprised to see Brooke. Polite talk occurs about the annulment and moving on. Brooke cracks that she’s not concerned about Bill; she has a feeling there’s already a special lady in his life.

At the Malibu house, Ridge reels from the news that Steffy had sex with Bill. He decides Bill took advantage of her and says, “I’m going to kill him.” He goes on about Bill being dangerous and assaulting Steffy, and announces they have to call the police. Steffy insists Bill didn’t force himself on her. Ridge counters that he used her, and he’s going to make sure he pays and rots in jail. Steffy pleads that it was consensual even though she regrets it to her core; there was no crime. She warns Bill has feelings for her – that’s why he and Brooke haven’t heard from him. Ridge gets clarification that she doesn’t return the sentiment and wants Liam to come home. Ridge maintains that Bill took advantage; she wanted to be alone that night, but Bill saw she was helpless. He vows to make this right and asks her to open up to Brooke about this; he’ll send her over. Ridge tells Steffy she’ll always be his little girl, and exits.

In Liam’s hotel room, Hope can tell that whatever made him walk out on Steffy is a big deal. Liam can’t talk about what happened with his marriage. Hope just wants him to know he has a friend in her. She relays that she’s back for good and Liam says he’s missed her. She’s missed him too. Talk turns to Hope’s life. She reveals she started working with a human rights organization while overseas to help families find new homes. It gave her a greater sense of purpose. Liam asks why she came back. Hope missed her family and home, and explains that Ridge convinced her to return. She may bring back Hope for the Future and combine it with some of her charitable work. Hope reveals she learned how to cook, and Liam mocks disbelief, then smiles. He asks about dating and she quips that Italian men love blondes. Liam is glad she’s back. Hope replies, “Me too.”

At Spencer Publications, Justin alerts Bill that Ridge Forrester just blew past security. Bill says he’ll handle it. Soon Ridge appears, glowering, and intones, “What did you do to my daughter?”

Brooke worries about what Ridge will do to Bill.

Steffy Tells Her Father She Had Sex...