Steffy Tells Her Father She Had Sex With Bill Spencer 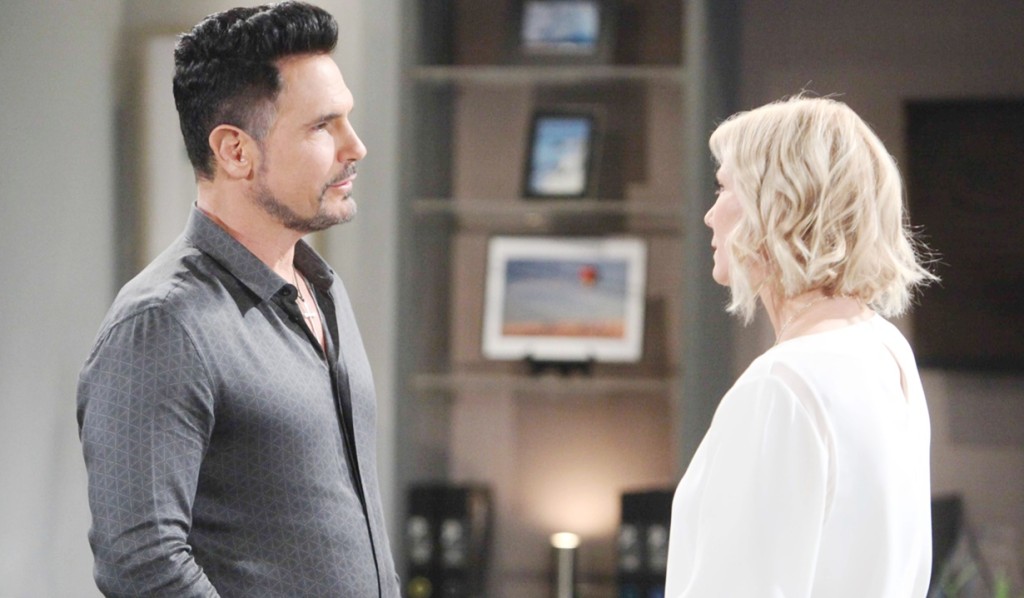 At the Malibu house, Ridge learns Steffy did something she deeply regrets. He assures her she can tell him anything and he won’t love her less. Steffy knows that, but worries he won’t ever look at her the same. Steffy first breaks the good news; she’s pregnant. Ridge, tickled, pulls her into an embrace and offers congratulations. He asks if Liam knows and continues rambling that everything is great. Steffy shakes her head and says, “You don’t get it.” After what she did, Liam may never forgive her. Ridge, confused, wants to go talk to Liam, but Steffy divulges that he didn’t just walk away, he took off his wedding ring and gave her annulment papers. She adds, “It’s all my fault!” Ridge struggles to understand what’s happened as Steffy laments she shouldn’t have gone to the guesthouse then ‘he’ wouldn’t have showed up. Ridge learns something happened that shouldn’t have happened, but reassures her. “Who was this guy?” Steffy sniffs that it was Bill. Ridge looks faintly murderous as he intones, “Bill Spencer did this to you?”

Bill flashes to sex with Steffy as Brooke enters his office. She presumes he’s thinking about a woman. Talk turns to him signing the annulment papers without a fight. Brooke deduces there’s a woman he’s infatuated, or in love, with. Bill observes she couldn’t exorcise him from her life fast enough, and notices her engagement ring. Brooke feels she’s not the only one who’s moved on, and presses for the identity of the new woman in his life. Bill’s not forthcoming, so Brooke turns the conversation to Steffy and Liam’s marriage. Bill admits he knew something was going on there, but feels they will find their way back together. Brooke relays that Ridge has gone over to the house to be there for his daughter. Bill thinks they should all stay out of it, Ridge included. Brooke’s taken aback; the situation seems serious and she wonders if there was an affair. Bill quickly replies that speculation’s pointless. Brooke learns Liam isn’t staying with Bill and wonders if they’re having issues again. Bill wants to focus on Steffy and Liam’s marriage. Brooke hopes Steffy will talk to Ridge. In Liam’s hotel, he’s surprised to receive a text from Hope saying she’s back in town. He flashes through the break-up with Steffy, then sends Hope his location. When she arrives, they embrace. After small talk about his takeout choices, Hope lets him know she ran into Sally, who told her he was going through a difficult time. Liam asks how much she knows. Hope saw the news of his marriage in Sydney and remarks on Steffy being a daredevil. She urges him not to give up, and notes he has a lot of people who care about him, including Sally Spectra. Hope assures him if he wants to talk about it, she’s there for him.