Brooke Asks Steffy to Be Her Maid of Honor

Wednesday January 17, 2018: Ridge and Brooke announce their plans to wed, speculation takes place about Bill’s love life, and Bill wants to be there for Steffy. 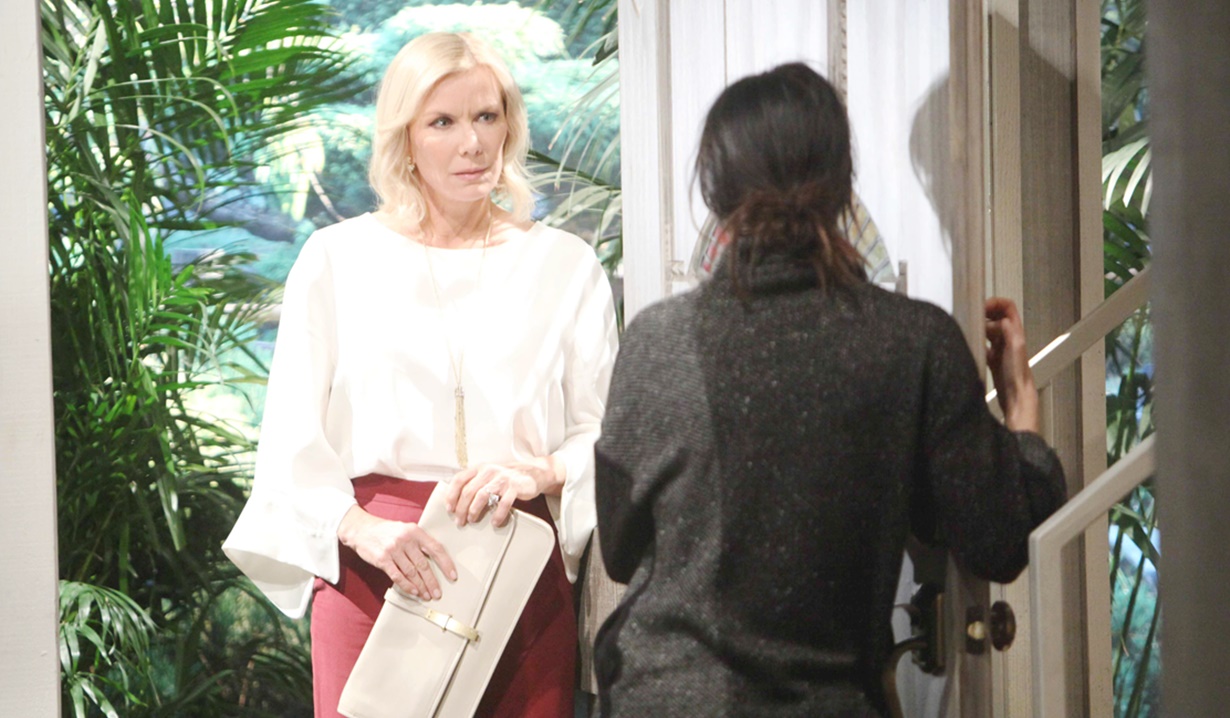 Ridge and Brooke canoodle in the Forrester Creations office and she admires her engagement ring. She’s glad Hope’s there to help her plan the wedding. Ridge suggests taking a jet to Vegas, but Brooke laughs that RJ would never forgive them. Ridge declares he called a meeting but left out Thorne, who wouldn’t be happy for them. They also wonder why Steffy’s not been at work. Soon, Hope, Ivy, RJ, Eric, Rick, Maya, Pam, and Nicole gather, and the wedding announcement is made. Rick exchanges a look with Maya, and Hope looks at the floor when they mention Liam and Steffy. After, Rick checks in with Brooke that remarrying Ridge is what she really wants. Hope interjects with her support. Talk turns to Thorne’s absence. Ridge notes he’s not accepting of their reunion. Brooke reveals that although she’s happy Hope is home, in the spirit of bringing everyone together, she will ask Steffy to be her Maid of Honor. Hope’s fine with it. Eric commends Ridge for his commitment and perseverance. Ridge chortles that the passion just gets stronger and stronger. Brooke thanks everyone for being there, then leaves for Steffy’s place. Those remaining discuss Bill signing the annulment. Maya wonders if there’s another woman in his life. Ridge doesn’t really care as long as it’s not Logan.

At home, Steffy’s hunkered down under a blanket and pillows. Bill arrives and learns Liam came home…to say goodbye. She tells Bill he shouldn’t be there. Bill insists he cares. Steffy counters he cares too much, and rehashes the regret about what happened at the guesthouse. She laments Liam being gone and wonders how she’ll do this on her own. Bill assures her she won’t have to; he won’t let her. Steffy alludes to Liam’s principles, and Bill reminds her what he did with Sally, adding his principles don’t matter if he can’t apply them now. They debate as Bill becomes angry – she’s pregnant and that changes everything! Steffy insists he wasn’t cruel; he’s in pain. Bill reveals she’s not the only one who had annulment papers shoved in their face; his marriage to Brooke is officially over. They reflect on their failed unions. Bill vows to be there for Steffy and the baby, but she sends him away. After, Brooke arrives, and is startled to see Steffy looking miserable with mascara smudged under her eyes. Steffy tidies self-consciously as Brooke mentions the family meeting and holds up her engagement ring. Brooke senses Steffy is not okay, but plunges ahead and asks her to be her Maid of Honor. Steffy stammers; she doesn’t know if she can. Brooke wants her and Liam to be at the wedding, but Steffy blurts that he walked out on their marriage. Brooke urges Steffy to open up. “What happened?”

Maya has news for Thorne.

Brooke Is Shocked As Bill Signs...