Brooke Is Shocked As Bill Signs Annulment Papers With No Pushback

Tuesday January 16, 2018: Carter and Maya clear the air, Rick and Thorne pressure Eric, and Justin issues a warning to Bill. 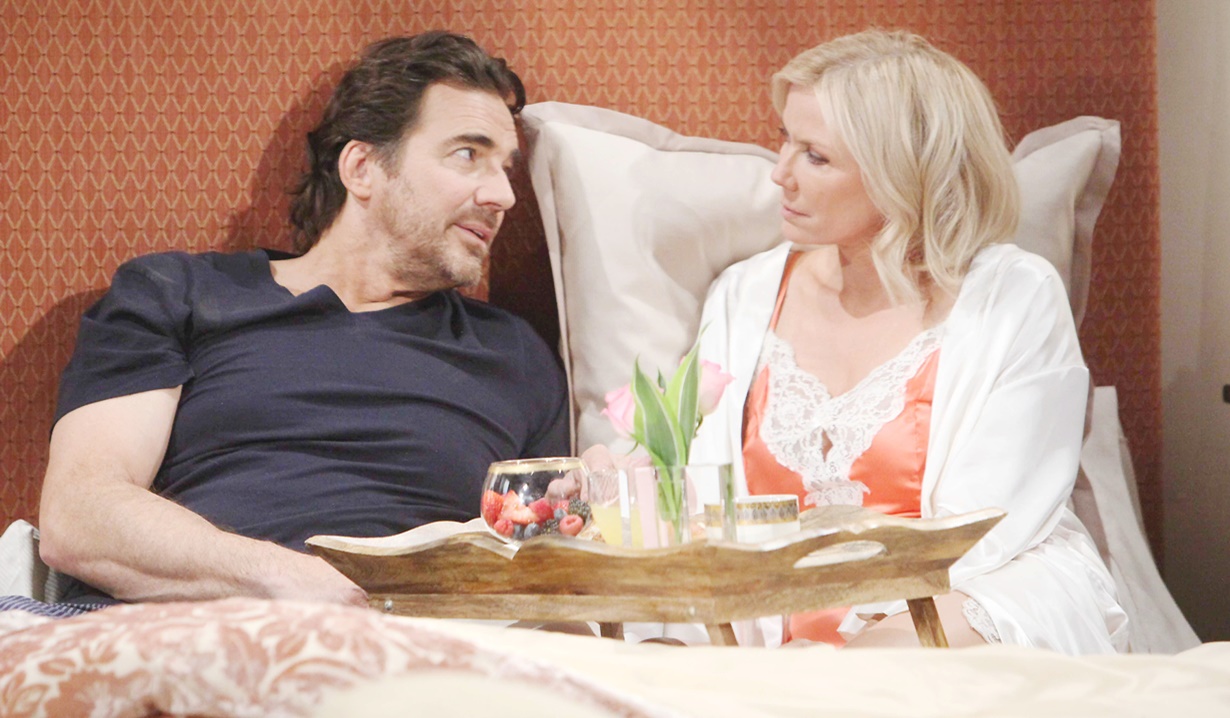 At home, Ridge surprises Brooke with breakfast in bed, but is distracted by her sexy lingerie. They kiss passionately. Ridge divulges that he had Carter draw up her annulment papers. Brooke is slightly taken aback, but Ridge talks up RJ seeing them committed and together. Brooke learns Carter will take the papers to Spencer Publications. Ridge vows to prove to her every day she made the right choice, and Brooke muses there never really was a choice. They express their love.

At Forrester Creations, Carter notices Maya’s distracted, and asks, “Is this about us?” She replies, “There is no us.” Carter acknowledges she made that clear, and wonders if she told Rick. Maya didn’t, and can’t understand why he’d bring this up after so much time. Carter feels he would have regretted not saying it in case she felt the same. Maya is glad they’ve cleared the air, and promises he’ll find a special someone. Elsewhere, Eric learns that Thorne told Rick about Ridge and Quinn’s betrayal. Eric insists it’s all behind them now. Rick goes on about how Ridge is when it comes to women. He and Thorne agree Ridge isn’t trustworthy; a concern now he’s planning to marry Brooke again. They bicker with Eric about whether Ridge will hurt Brooke this time. Rick urges Eric to open his eyes. Thorne and Rick press Eric not to rubber-stamp everything Ridge does, and ask him to give them another chance at Forrester; see Ridge for the man he is. Thorne adds he’s the better man for Brooke. After Eric’s gone, Rick and Thorne commiserate over their father’s attitude about Ridge, and Thorne reiterates he’s determined to be the man in Brooke’s life.

Justin finds Bill stewing in his office. Dollar Bill admits he’s not sleeping well and hasn’t heard from Liam or Steffy. They debate about whether the marriage will survive. Justin warns Carter Walton is coming in – probably regarding his marriage to Brooke. Bill is only focused on his family. Justin can’t help but wonder how things would have played out had he and Brooke not fallen apart. The conversation is interrupted by Carter’s arrival. Bill calls him ‘the grim reaper, there to drive a stake through his marriage’. Carter talks about moving on and presents the paperwork. Bill surmises Ridge pushed for this and speaks cryptically about changing course forever as he signs. After Carter leaves, Justin marvels at Bill signing, knowing Ridge was behind it. It shows where his mind is when it comes to Steffy. Bill orders him to drop it, but Justin chuckles and warns if Liam and Steffy break up it’s going to come out why, and Ridge will lose his mind.

At home, Ridge and Brooke muse about her not having heard from Bill in weeks, when Carter calls to say Bill signed the papers. Brooke is shocked, and Ridge kneels before her to propose again. She squeals her acceptance and he places her engagement ring on her finger.

Ivy and Rick wonder if Bill is seeing someone new.

An Emotionally-Scarred Liam Ends His...

Brooke Asks Steffy to Be Her Maid of...