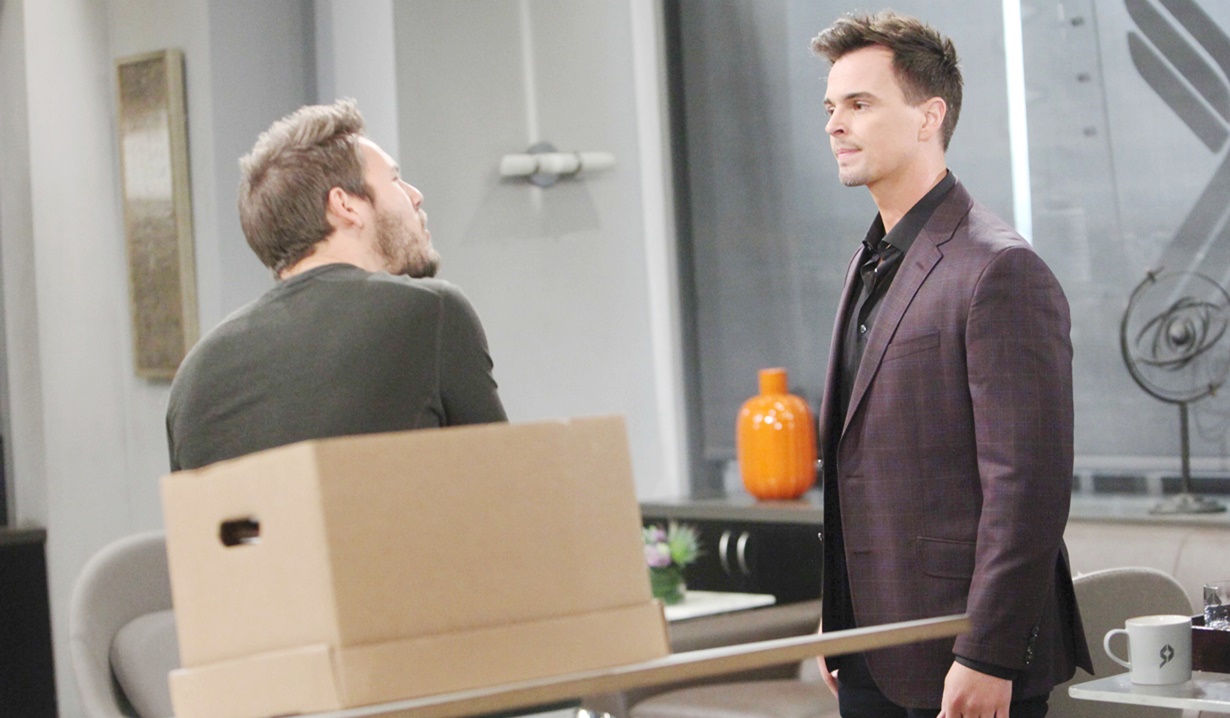 At the Malibu house, Steffy decides that Bill cannot be there in case Liam comes home. Bill assures her his son won’t abandon the mother of his child. After, Steffy leaves Liam another voicemail. Katie arrives to see if Liam came back. She tells Steffy that Liam won’t abandon her and their child, but Steffy isn’t sure what he will do. They rehash Steffy spiraling after learning Liam kissed Sally. She hates herself. Katie feels she should never have been put in that position…by Liam, and especially by Bill. Steffy clarifies she’s as much to blame as Bill.

At Spencer Publications, Liam is packing when Wyatt enters. He notes Liam’s mood and starts asking questions. Liam snaps that he doesn’t have time for this. Wyatt manages to deduce that it has to do with their dad, and notices Liam’s bandaged and not wearing his necklace. He asks, “Liam, what did Dad do?” Liam grimly replies, “Something I’ll never forgive him for.” Wyatt presses for more information until Liam erupts, “Do you really want to know what dear ol’ Dad is capable of? He slept with Steffy!” Wyatt’s floored. Liam relays that when Steffy went to the guesthouse the night they fought, Bill showed up and they had sex. Elsewhere, Justin informs Bill that he found Liam – he’s in the building. Bill’s determined to fix this. Meanwhile, Wyatt expresses disbelief about Liam’s revelation, but Liam explains Steffy confessed after he discovered a paternity test. Wyatt’s relieved Liam is the father, and doesn’t know what to say. Liam turns emotional about having his dreams come true and Bill and Steffy ruining it. Wyatt holds his brother as he breaks down. After, Wyatt learns Bill was consoling Steffy when it happened; it was two consenting adults. Liam agonizes that it was the most disgusting and heinous thing they could do to him. Wyatt asks about the baby. Liam laments the tragedy of it. He’s leaving as Bill appears seeking forgiveness for Steffy. Wyatt steps between them as Liam hisses, “Don’t say her name!” Bill warns if he walks out on Steffy it will be the biggest mistake of his life.

At Brooke’s place, Hope tells her mom and Ridge that she’s missed them both. Rick and Maya arrive, and are surprised and happy to see Hope. The newcomers embrace the blonde as Brooke announces Hope is back to stay. Maya takes Rick aside to discuss the fact that he’s yet to confront Ridge for cheating on his mother. They rejoin the others and Rick asks Hope’s game plan. Ridge talks about her possible return to Forrester, but Rick notes he’s only the co-CEO and suggests Hope talk to Steffy. They discuss Hope’s extended absence, and Rick wonders if she stayed away so long because of Liam. Hope assures him she’s fine with Liam and Steffy being married. Hope confides she’s looking forward to seeing Steffy and having a fresh start. Ridge enthuses that Steffy could use a friend.

Wyatt Goes Ballistic on Bill After...