Bill Wrestles Liam to the Floor After a Scathing Verbal Confrontation 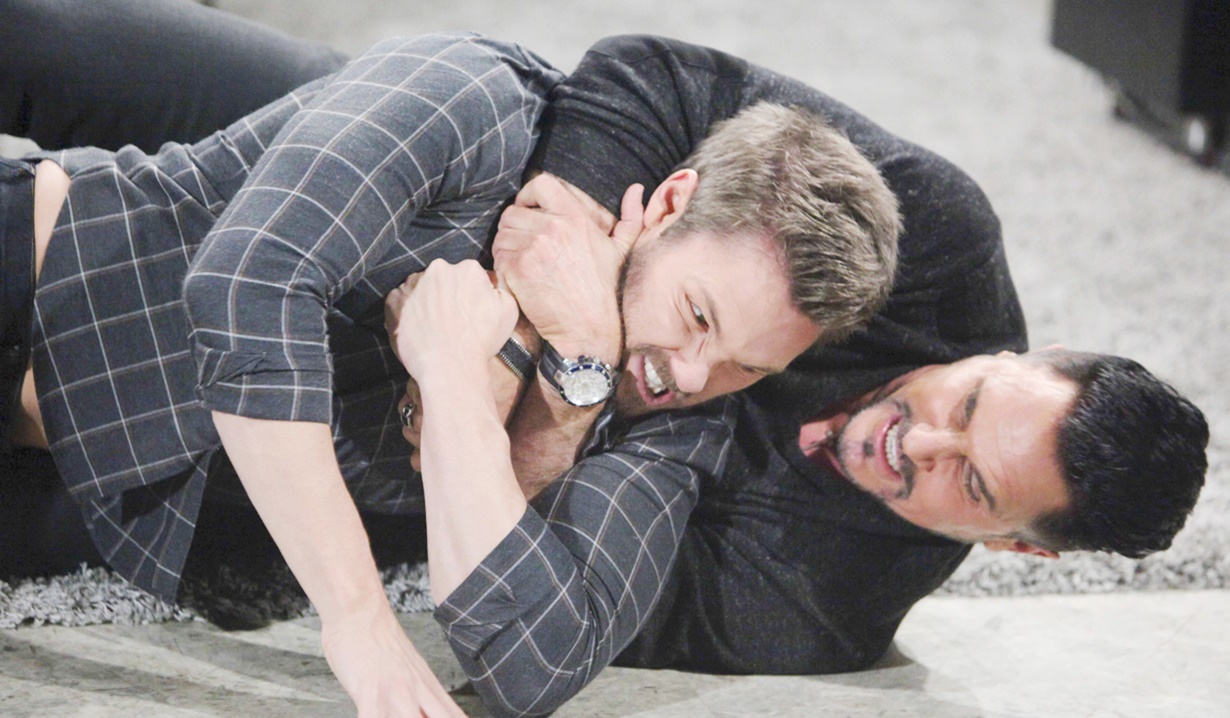 Outside the Malibu house, Steffy pleads with Liam that this isn’t the end; she’s carrying their baby. Liam says that’s over now, and adds that he loved their life, and most of all he loved her. Steffy sobs at him not to leave her as he walks away. After, Steffy holds her tummy, shell-shocked, on the walkway, before settling down on the beach, rocking back-and-forth in the sand.

In Bill’s office, he smiles while thinking of Liam. When Liam enters, Bill announces he’s gifting Liam the cliffhouse and the property. Liam asks, “Does that seem like a fair trade to you?” Bill senses something’s bothering his son as Liam rambles cryptically about his mother wanting to keep him away from Bill. He thought his mother was wrong, and believed everyone had good in them…but he was wrong. Bill realizes there is something going on with Liam, who continues to speak in riddles and asks why Bill isn’t walking around with his chest puffed out like a peacock as usual. Liam finally comes out with a confirmation that Steffy is pregnant, and adds that the baby is not Bill’s. Bill wants to explain and asks him not to blame Steffy; there’s a child on the way that has to come first. Liam doesn’t want to hear the Spencer blood speech and vows to keep his child from Bill. Bill insists what happened is the greatest regret of his life, but says it can’t end like this. Liam pushes past Bill and hollers, “You don’t deserve me!” Bill wrestles him to the ground. “You have a baby on the way and you’re not going anywhere! I’m so sorry!”

In Katie’s bedroom, Wyatt fills her in on Bill’s intent to find out who he’s been spending time with, and talk turns to him giving out multi-million dollar gifts. Katie muses Bill must feel guilty about something and asks who he’s giving such gifts to. Wyatt replies, “Just Liam.” He reflects that Liam needs their father more than he does, and is now giving him something he can’t at the moment. Katie quickly cops on and asks, “Are Liam and Steffy pregnant?” Wyatt tries to play innocent but she says it’s written all over his face. She wonders if Bill knows he’s about to be ‘Grandollar Bill Spencer’? Wyatt points out it’s why he’s signing over the house, and muses that it’s a good time to be a Spencer. Katie notes she has a meeting with Steffy today, who is working from home, so maybe she’ll get her to spill the beans. They dish about Steffy’s friends all being men, and laughingly wonder if she and her BFF, Bill, get together to braid each other’s hair.

Katie enters the empty Malibu house and spots the paternity test on the table. Steffy appears. Katie asks if she’s in trouble, and says, “Paternity test. Does Liam know?” Steffy cries and Katie holds her.

Liam promises Bill will pay for his actions.

Liam Walks Out on Steffy Amid...

Katie Is Outraged That Bill Had Sex...