Liam Walks Out on Steffy Amid Concerns He’ll Kill Bill 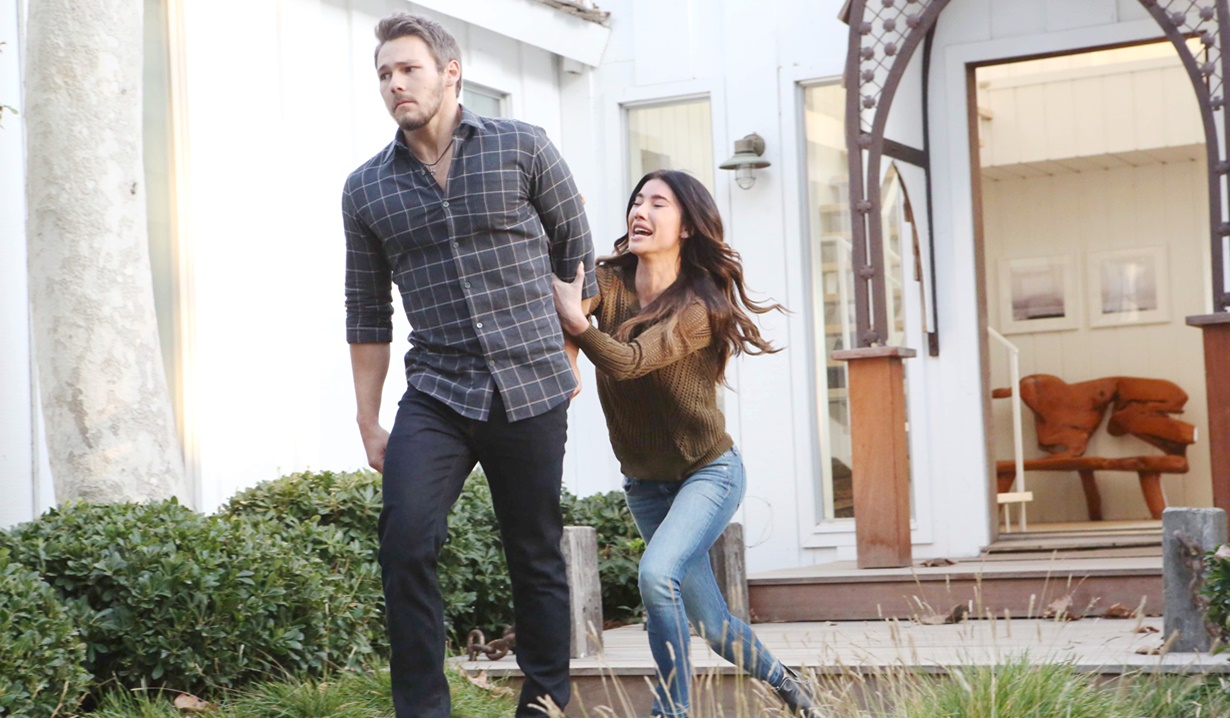 In the Malibu house, Liam reels from the revelation that Steffy had sex with his father. She pleads that the baby is theirs; that’s all that matters, and explains it was like an out of body experience. Liam takes that to mean that Bill took advantage of her. He wonders if Bill drugged her and used her to get to him. “Please tell me that’s what happened.” Steffy tearfully recounts what happened that night – she felt like she was in an altered state, but Bill didn’t drug her, offer her a drink, or force himself on her. Steffy cries that she betrayed Liam in the worst way and she’s so sorry. When she contends that they were in the moment just like he and Sally, Liam explodes that it’s ridiculous to compare a kiss with this. Steffy sobs as Liam wonders if she finds him weak. She answers, “No.” Liam hollers, “Then why did you sleep with my father?!” Steffy pleads that they have it all. Liam corrects, “Had.” Steffy begs him to tell her they still have a future. Liam seethes that he’s afraid he might kill his father. “I hate him, and I hate you.” Steffy hates herself. She offers to leave, but Liam can’t stay there in his father’s house where they renewed their vows – all of this is a lie. Steffy frantically follows him outside as he walks out. He turns and reiterates how much he loved her and wanted a family with her as she whimpers. Liam breaks down over her taking that away. “How could you do that?”

At Spencer Publications, Wyatt reacts to the news that Bill is going to give Steffy and Liam the cliff house. Bill thinks it will be a great place for them to raise a family. Wyatt muses that his father must know. Bill asks, “I know what?” Wyatt wonders if he’s spoken to Liam recently. Bill finally reveals that he knows Steffy’s pregnant. They talk about being an uncle and grandfather. Bill opines that you fill the kids up with sugar and hand them back to the parents. Wyatt can’t think of anything more wonderful than welcoming another Spencer into the fold. After, Justin joins them and Bill signs the paperwork to turn over the house in Malibu. Wyatt scoffs that maybe he’ll be the next big winner. Bill counters, “If you do something to warrant it.” Wyatt’s taken off guard when Bill announces that he knows Wyatt’s secret – he knows ‘she’ exists, but hasn’t put a name to her yet. “But I will.” Wyatt tries to downplay it as he leaves. Justin then asks Bill if his generosity is his way of making up for what he did. Bill admits guilt may play a role; he’s going to do everything he can to love and support Liam and Steffy as they start their family. Justin thinks Liam is lucky to have him.

Bill is confronted by a furious and aggressive Liam.

Liam Reels After Steffy Confesses to...

Bill Wrestles Liam to the Floor...