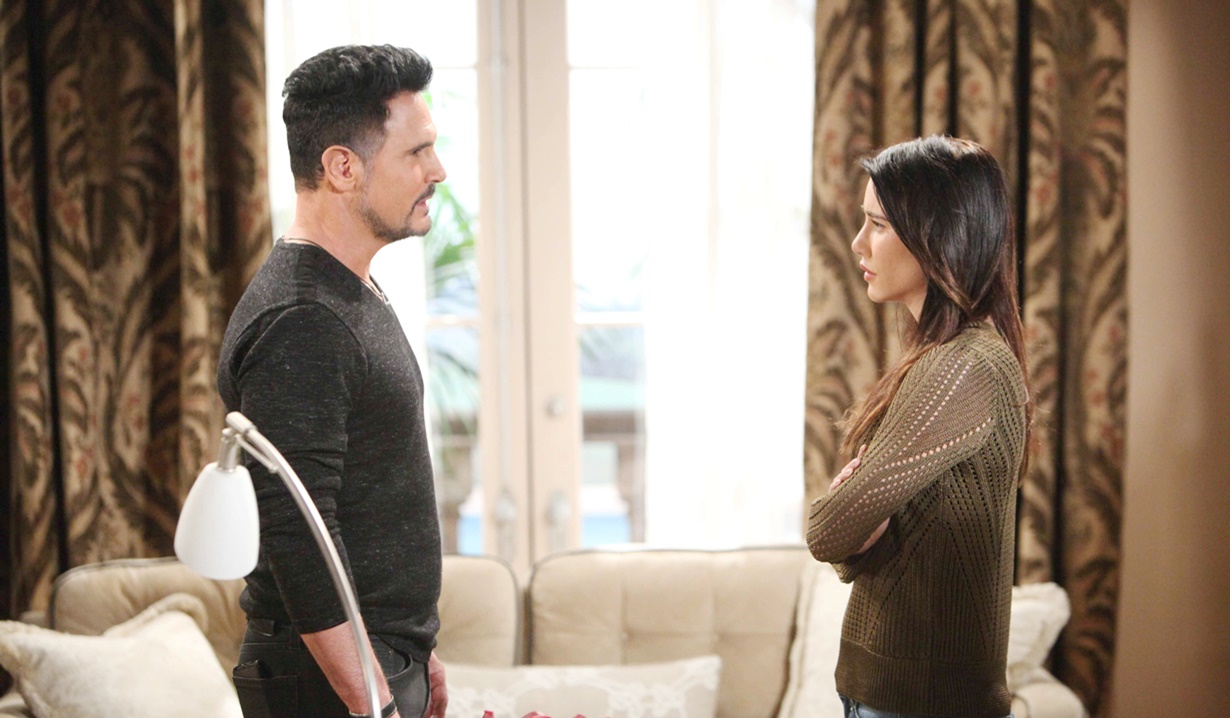 In Malibu, Steffy phones Dr. Campbell, who tells her the paternity results aren’t in yet, but should be by the end of the day. Steffy flashes to making love with Liam, who appears in the doorway after a run. He enthuses about it being a beautiful day since his wife is carrying his child. Steffy hopes the baby will be just like him; it’s what she’s hoping and praying for. Liam gets ready for work and marvels that it wasn’t so long ago his father was plotting revenge against him. Once alone, Steffy considers that remark.

At Spencer Publications, Bill flashes to Steffy telling him she’s pregnant. Justin appears and presumes Santa wasn’t good to Bill by the expression on his face. “Want to talk about it?” Bill assures his friend his Christmas was fine, but remains distant. Justin can tell something is up with him.

At Brooke’s place, Thorne lets her know he won’t ‘get used to’ the idea of her marrying his brother. Brooke relays that she’s given it a lot of thought and has decided he needs to move out of there. He wonders if she’s afraid of temptation and alludes to how tightly Ridge has her wrapped around his finger. Brooke informs him, “It’s time.” Once Thorne’s packed up and at the door, they debate one last time about Ridge. Brooke insists he’s grown. Thorne will be around no matter what happens. He kisses her head and goes. Wyatt arrives at Katie’s place dressed as a hot water heater repairman. She pulls him inside and they kiss passionately. Wyatt gets a text about a meeting at work. Katie warns if he can’t take care of her needs she’ll have to call another plumber. She reminds him she’s a free agent and he wraps her into another kiss and groans, “You are killing me right now.” She continues to tease him about preferring to go to a boring meeting. At Spencer, Wyatt learns from Liam that Bill got a text and ran out. Wyatt’s frustrated; he was in the middle of something. Liam needles, “What’s her name?” Talk turns to Bill becoming a grandpa and the brothers share a laugh before reflecting on how well he and Steffy get along. Wyatt predicts the kid will bring the family closer together.

At Bill’s place, Steffy demands honesty and asks him if he had sex with her to get revenge on Liam. Bill protests…that night was about them and nothing else. They rehash the circumstances – they were there for each other. It was never about revenge. Steffy apologizes and leaves for Dr. Campbell’s office.

At the doctor’s office, Steffy panics as Dr. Campbell enters with a file. “I need to know who the father of my baby is. Are those the paternity results? I need to know!”

At Katie’s house, she answers the door in lingerie, assuming it’s Wyatt, but it’s Thorne. She invites him in.

Steffy’s doctor notices something of interest in the DNA results.

The Bold and the Beautiful Is...

Steffy Learns Liam Is the Father of...