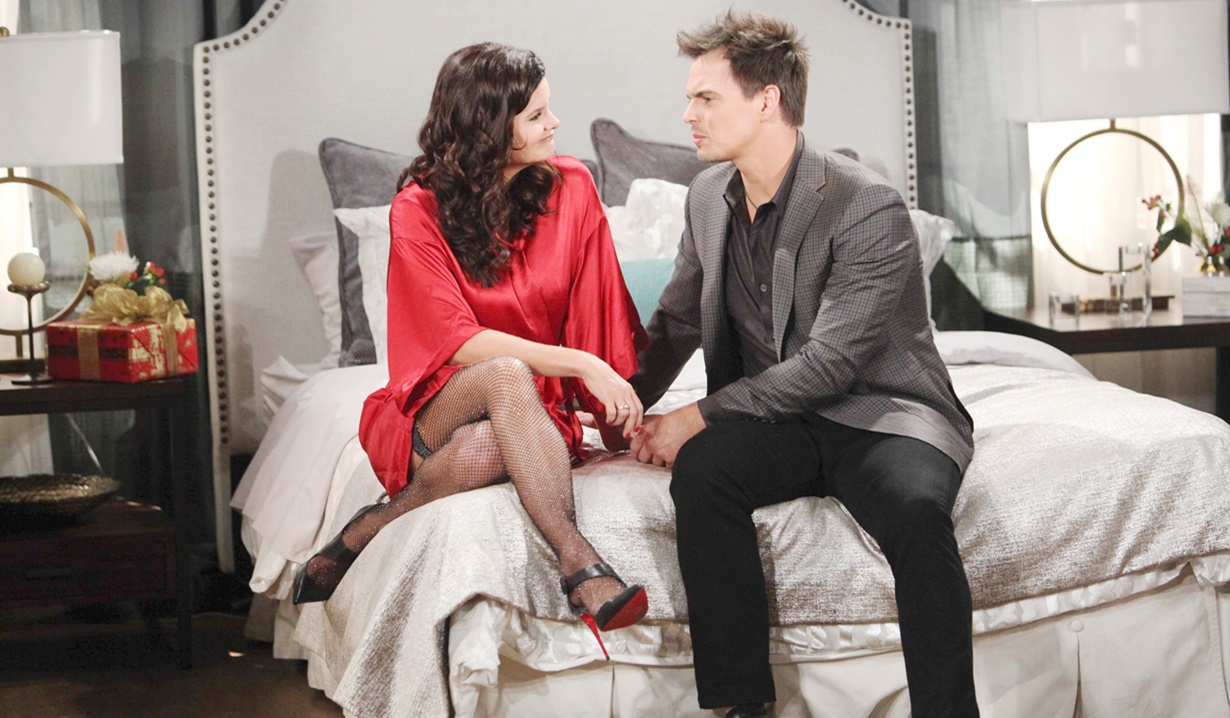 At Spencer Publications, Bill flashes to telling Steffy they need to find out the truth, then sends her a text. Liam enters. He marvels when Bill approves a business proposal. Bill leans over the desk and says, “You look different.” He fishes about Steffy’s doctor’s appointment the other day. Liam confirms she’s in good health. Talk turns to happiness and Liam gushes about owing his happiness to Steffy and Bill.

In her doctor’s office, Steffy reads Bill’s text and responds. The doctor enters and Steffy explains she had consensual sex with another man just the once. The doctor replies, “It only takes once.” Steffy needs this baby to be her husband’s. The doctor explains the test and Steffy tells her, “Let’s do it.” Once the doctor has all the samples she asks if Steffy is okay. Steffy reassures her, “Yeah. I hope so.”

At Spencer, Liam alludes to Steffy giving him a gift even Bill can’t top and decides to call her. They have a cryptic conversation and Bill gets impatient so Liam cuts it short. Liam exits, and returns with a gift for Bill to thank him for not rolling back the paternity leave – it’s a trophy. Bill intones, “I’m not the World’s Best Dad.” Liam loves him and hopes that when he’s a father he’ll be as generous and giving as him.

Steffy disconnects from Liam at the doctor’s office, then learns the samples were all viable so the test can go ahead. Later, Steffy presses for results, but the doctor explains it will take a few days. Steffy’s mind reels with thoughts of Bill and Liam.

Wyatt arrives at Katie’s house and they banter before Katie reveals she told her sister about their involvement. Wyatt gapes. Brooke is still married to his father! Katie muses, “Technically…” Wyatt, grinning, mimes being hung by a noose around his neck, then falls onto the bed as Katie laughs and says, “Don’t be so dramatic!” She swears no one will find out as Wyatt continues to maintain he could die. Katie notes that wherever Bill’s attention is these days, it’s not on them. She wonders what took him so long, and Wyatt shrugs that Liam was yakking away about his happiness. Soon the conversation turns more intimate, Katie reveals sexy holiday lingerie, and they kiss passionately. They pause to discuss their relationship. Wyatt thinks the rule should be that they please themselves, and he doesn’t want to hear from people who think they’re a bad idea. Katie loves that he’s sensitive and rips his shirt open. She enthuses, “I’ve always wanted to do that!” They kiss and fall onto the bed. After sex, Wyatt has a gift for Katie. She opens the earrings and wonders if he feels guilty about something. Wyatt just knows he’s going to see her at Eric’s for Christmas and it won’t be the same. He wanted to give her something secret to wear that could touch her when he can’t. Katie breathes, “Thank you.”

An engagement is announced at the Forrester Christmas gathering.

Ridge Announces His Engagement to...