Steffy Schedules a Paternity Test After Screaming at Bill

Wednesday December 20, 2017: Bill presses to find out the truth, Katie gives Brooke advice, and Thorne is put on notice. 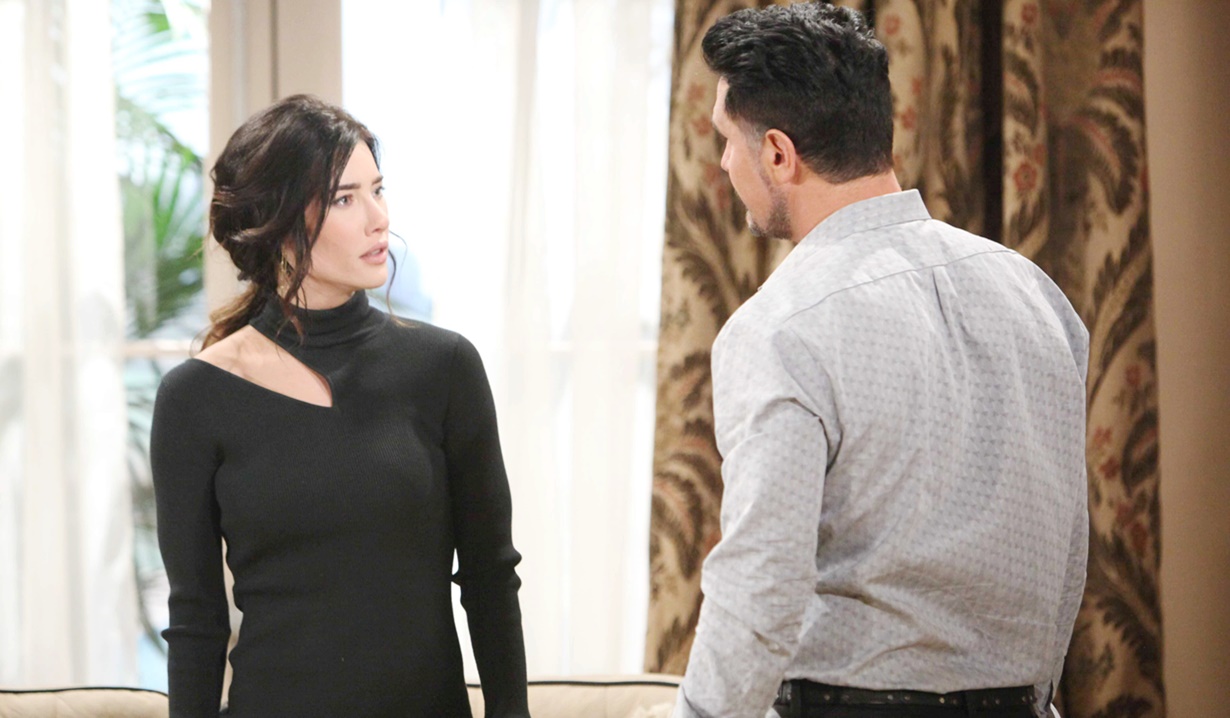 At Bill’s place, Steffy informs him that her pregnancy is happy news – she and Liam have wanted this for so long. Bill protests. “Steffy! There’s a possibility that baby is mine.” Steffy, extremely agitated, hollers and reveals the stress she’s been under. Bill’s sorry, but this isn’t just about her anymore – the baby has to come first. They debate about whether Liam’s the father. Bill wants to find out, and adds she should raise the baby with the biological father. Steffy panics. She decides she has to know for sure that Liam is the father and calls her doctor to schedule an immediate paternity test. She tells Bill she looks forward to getting the result and moving on with their lives. When Bill tries to justify them turning to one another, she screams at him. Once she knows for a fact her child is Liam’s, she will never think about that night with Bill again. At Spencer Publications, Liam swears Wyatt to secrecy about the pregnancy. Wyatt promises to keep quiet, and wonders when his brother will tell Bill. Liam marvels that Steffy basically gave his father back, and now she’s giving him a baby. As they talk, Liam recalls how devastating it was when Steffy lost their baby before. Wyatt cautions him against inviting that kind of negativity in. Liam agrees and goes back to enthusing about them becoming parents, as Wyatt teases about dirty diapers and sleep deprivation. Liam can’t believe there’s a little human inside Steffy that’s half her, and half him.

At Katie’s place, Brooke understands the thrill of Katie’s relationship with Wyatt. Katie warns her not to say anything. She agrees and says, “You don’t want Bill to find out.” Talk turns to how Bill will take Brooke’s engagement to Ridge. Brooke admits she hasn’t heard from him at all…not one word. Katie asks about Thorne. Her sister says it’s been good having him at the house and catching up. Katie wonders how Ridge feels about it. Brooke concedes they’re competitive, and reveals that Thorne warned her about trusting Ridge again – he thinks the two of them should get back together. Katie can’t believe Thorne asked her to marry him instead of Ridge! Brooke doesn’t think he was serious, but Katie advises Brooke to be crystal clear with Thorne that there is no chance for them. Brooke agrees. She’s glad Katie’s happy with Wyatt. However, she warns her sister to be careful as Bill won’t like it. At home, Brooke looks up when Thorne enters in a swimsuit and reports the pool’s back up and running. Brooke shares that she’s been to Katie’s, and Thorne senses something is bothering her. The blonde wants to be sure he understands that she is marrying Ridge even though he doesn’t approve. He’s sweet to care about her, but if he’s going to live in her house, he needs to respect her decision. Thorne keeps the mood light, teasing that she shouldn’t tell Ridge she’s referring to him as sweet.

Bill Learns Steffy Could Be Carrying...