Bill Learns Steffy Could Be Carrying His Baby

Tuesday December 19, 2017: Steffy has a terrible daydream, Wyatt learns Liam’s going to be a father, and Katie and Brooke exchange news about their love lives. 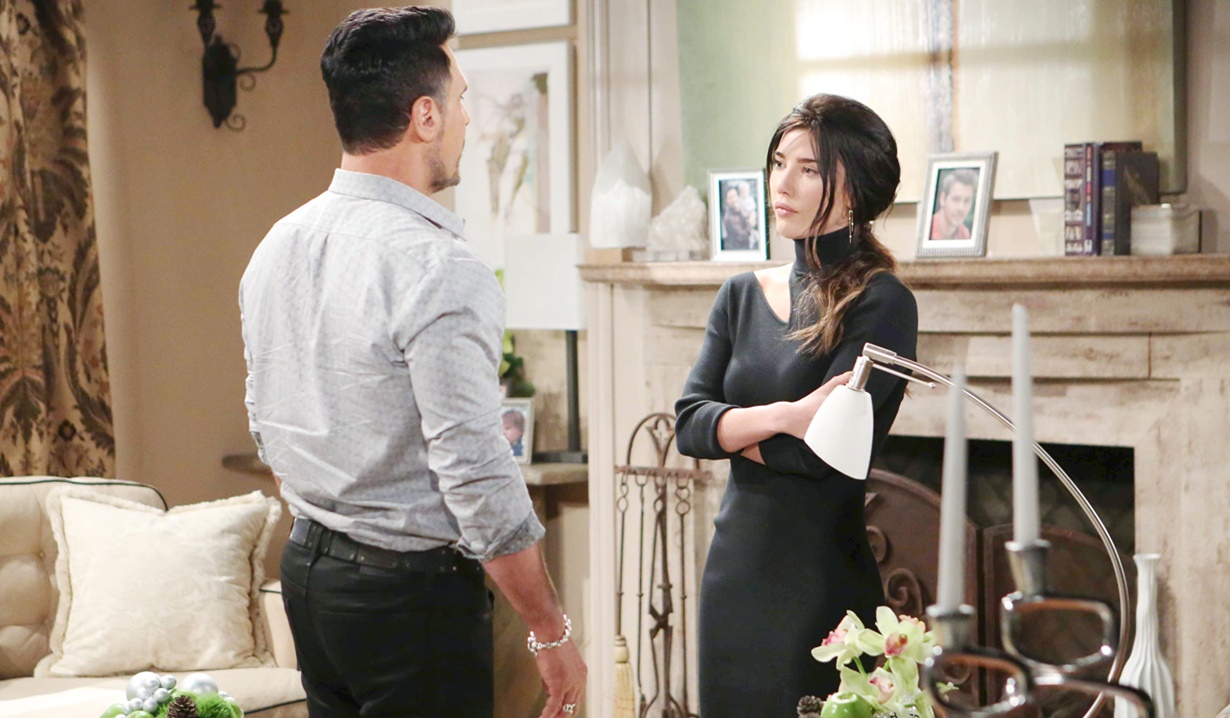 At work, Steffy tears up as she flashes to Liam gushing after learning she is pregnant. Maya and Nicole enter discussing Lizzie. Maya apologizes for the mommy talk but a clearly distracted Steffy assures Maya she’s not being insensitive. They wonder if Steffy is thinking about what to get Liam for Christmas. Steffy says she’s taken care of that, or so she hopes. Maya and Nicole leave, and Steffy has a disturbing daydream of giving birth and Liam angrily confronting her with the screaming baby, who has Bill’s face.

More: Holiday schedule for B&B and all soaps

At Spencer Publications, Wyatt notices Liam is distracted. Liam grins. He has news, though they’re not telling everyone yet, and shares, “We’re welcoming a new Spencer into the world.” Wyatt is thrilled that Liam and Steffy are going to have a baby and embraces his brother. He asks after Steffy, and Liam observes that he’s never seen her so emotional. Wyatt feels the kid will be really lucky to have them as parents, and their dad as a grandpa. He wishes he could see Bill’s reaction. Liam reflects on things being good between him and Bill, and tells Wyatt finding out he’s going to be a father was the greatest moment of his life. At Bill’s place, Ridge informs his nemesis that he asked Brooke to marry him and she accepted. Bill notes the gloating, and tells him the message has been received – he can go now. Ridge urges Bill to sign the divorce papers. Bill remarks on Ridge’s insecurities, and scoffs that he must have done a number on Brooke to make her forget his infidelities. Ridge counters that Bill’s no stranger to infidelities himself. As Ridge mentions getting along for Steffy’s sake, she phones and asks to come to the house. Later, Steffy arrives, describes her doctor’s appointment, and reveals she is pregnant. Bill marvels about being a grandfather before realization dawns that the baby could be his.

At Katie’s house, she wonders if there’s a reason for Brooke’s impromptu visit. Brooke giggles that Ridge proposed and she accepted. Katie congratulates her, she always figured they’d end up together. Brooke sees an article of male clothing in Katie’s laundry that’s too big for Will. Katie says since they’re sharing, she and Wyatt have been seeing each other; they’re involved. Brooke grapples with this information. “How?” she asks. Katie explains how they connected over the success in Monte Carlo, and admits she was hesitant to get involved, but it feels right when she’s with him. Brooke listens as Katie goes on about how good it is to tell somebody. She explains that Eric and Quinn know, though Bill doesn’t. Brooke asks where she sees it going. Katie isn’t sure, and doesn’t care. She ensues to gush about Wyatt being smart and fun. Brooke narrows her eyes and asks if Katie’s sure there’s not more to this relationship. Katie only knows she doesn’t want to give him up. Brooke’s just worried it could get ugly if Bill finds out.

Bill urges Steffy to get to the truth.