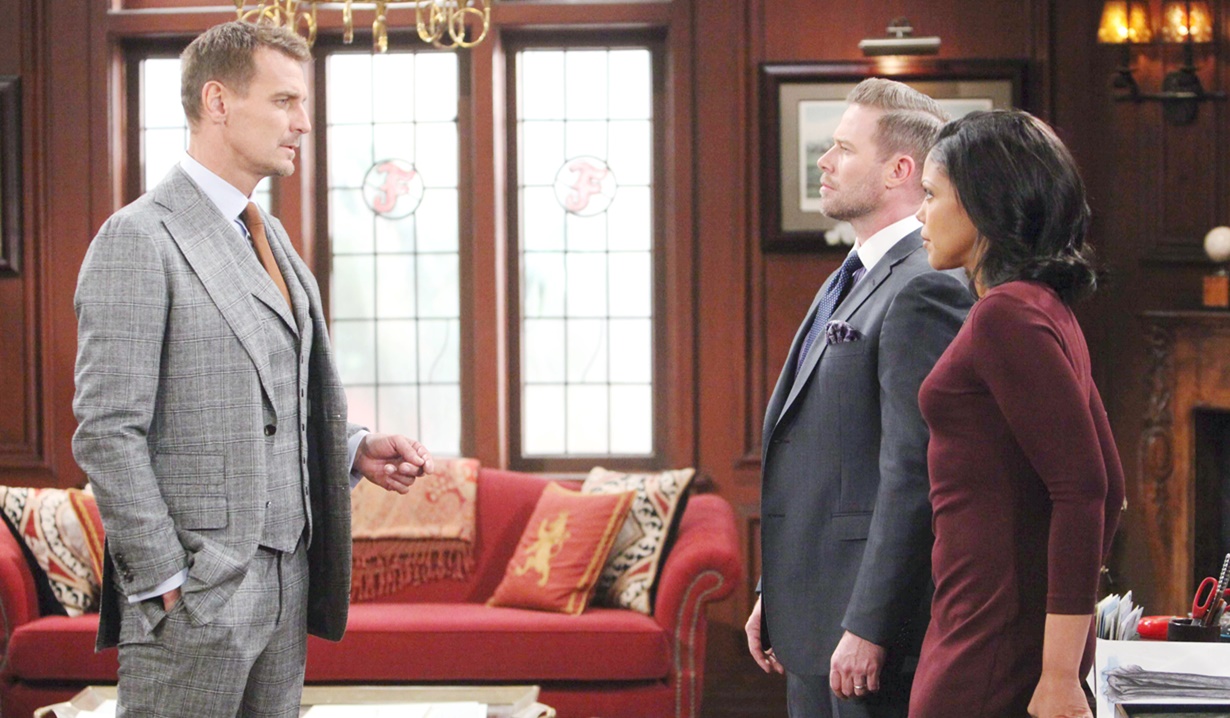 At the doctor’s office, Liam and Steffy enthuse emotionally about Steffy being pregnant. Liam exclaims, “We made a baby!” Steffy hugs him, but looks unnerved.

At Spencer Publications, a distracted Bill snaps at Wyatt, who grouses that Liam is nowhere to be found and must be with Steffy. Bill flashes to sex with his daughter-in-law. Wyatt tells Bill he knows what he’s thinking about and suggests that at some point he’s got to move on. Bill remains silent as Wyatt goes on about losing the woman you love. As Wyatt talks about letting her go, Bill pours a glass of scotch and downs it. Wyatt recalls how he felt when Steffy went back to Liam; she’s an incredible woman. Bill agrees that Liam’s damn lucky to have her.

At Forrester Creations, Thorne tells Rick and Maya he hopes Brooke didn’t accept Ridge’s proposal as he always disappoints her. Rick muses that it’s always the same outcome. Thorne replies, “Not this time. Not if I can help it.” Thorne and Rick compare notes on how they’ve both been kept back by Ridge at the company. As they discuss the situation, Thorne stuns Rick and Maya by revealing that Ridge betrayed Brooke with Quinn. Rick and his wife are outraged. Rick wonders why Brooke would ever give him another chance. Thorne thinks Brooke goes in with her whole heart, and reveals he told her how he feels about her – he hopes it wasn’t too late. Rick tells Thorne he’s a good man, and he’s pulling for him. In bed at Brooke’s place, she tells Ridge she can’t wear his ring until her divorce comes true. Ridge accepts it and notes that once it goes on her finger, it will stay there forever. Brooke mentions she hasn’t heard from Bill and Ridge finds that strange; he wonders what he’s up to. After he’s dressed, he decides to find out if Bill’s plotting something, though Brooke asks him to leave it alone. Later, Thorne arrives home and Brooke informs him that Ridge proposed and she accepted. Thorne can accept it for now, but reiterates that he’s the better man for her, and he wants to be with her more than anything.

At home, Steffy is touched as Liam goes on excitedly about having a baby. Raising a family with her is the one thing he’s wanted more than anything in his entire life. Steffy has a reflective moment, and Liam assures her that everything will go well this time. Steffy agrees; this is another chance for them. Life wouldn’t be so cruel as to not allow them to raise this baby. She sheds ‘tears of joy’, then Liam talks to her tummy, making her laugh. Liam marvels, “It’s ours,” which has Steffy looking edgy again.

Bill Learns Steffy Could Be Carrying...