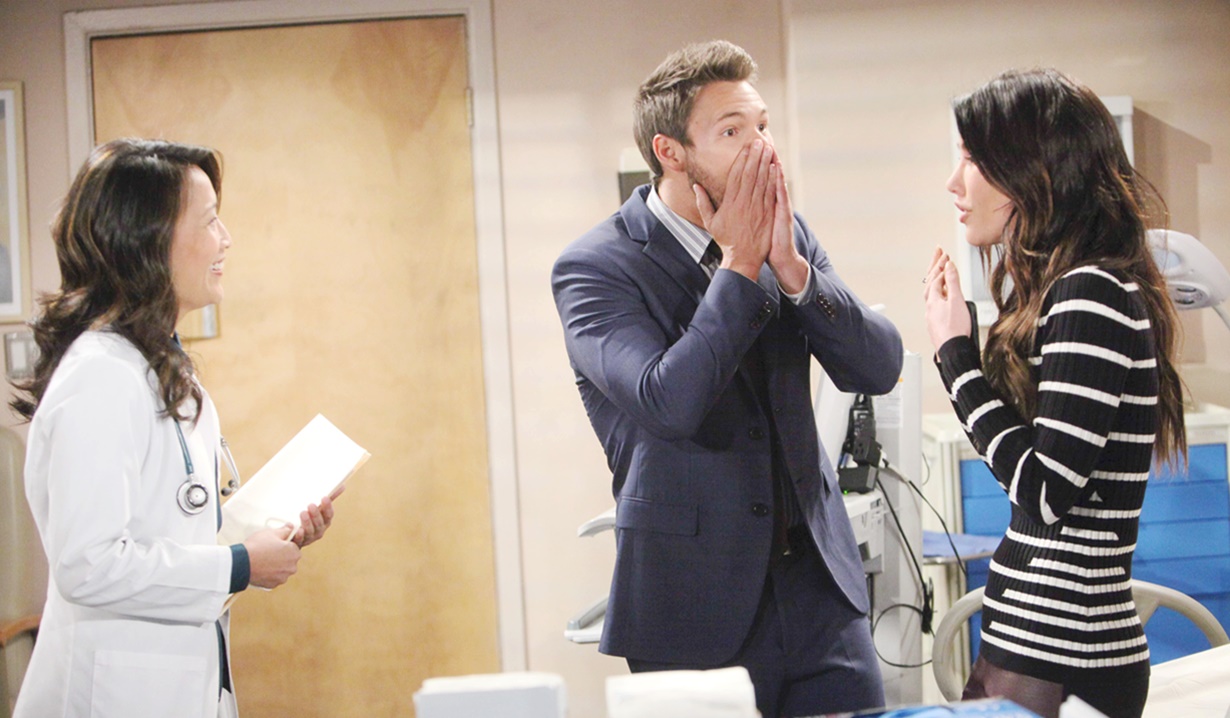 Outside at Brooke’s place, she asks Ridge, who is down on one knee, if he’s sure about this. Ridge wants to grow old with her. Brooke says all she’s ever needed was his love and commitment. Ridge admits he’s screwed that up, but he wants that future now. Brooke can see that future too. She says, “Yes, I will be your wife again. Forever.” They embrace, express their love, and kiss. Brooke won’t wear that ring just yet, which Ridge respects. Inside, Ridge tells Brooke he’s the most beautiful woman he’s ever seen, and they begin undressing before falling on the bed to make love. Afterward, they talk about how they’re meant to be together, and Ridge looks forward to his ‘one-of-a-kind Logan’ wearing his ring on her finger.

More: Jennifer Gareis back to B&B

In the Forrester mansion, Thorne confirms to Eric that he told Brooke he had feelings for her – Ridge isn’t capable of committing to her, but Thorne is. Eric admits another go ‘round for Brooke and Ridge may not be wise. Thorne feels she needs to be done with him for good. Eric is taken aback when Thorne asks him to fire Ridge – or give him a leave of absence – so he can think about the way he’s treated people; he needs to be gone from Forrester and Brooke’s life. Quinn appears and reports that’s not likely – he’s probably proposing as they speak.

Liam joins Bill in the office at Spencer Publications, and mentions Steffy had an appointment. Bill reminds him she comes before work. Liam ruminates about him and Bill having come a long way thanks to Steffy, and declares that his father’s best quality is loyalty…especially to his two sons. Bill acts strange, and Liam thinks it’s because he’s thinking about Brooke. He tells Bill it’s okay to be upset about what happened. Bill muses that for a brief time he had exactly who he wanted, but he can’t anymore; he’ll never have her again, and he must come to terms with that. Bill urges Liam to go be with Steffy. They embrace. Liam thanks Bill for being there. Bill replies, “Always.” Once alone, Bill leans heavily on the desk and sighs as he flashes to sex with Steffy. At the doctor’s office, Steffy submits to blood tests as part of her routine exam, then answers questions. Steffy alludes to having had personal stress, but assures the doctor she’s fine now. The doctor goes to check the blood tests. Steffy is dressed and waiting when Liam arrives. The doctor reappears with Steffy’s results – she’s pregnant. Liam and Steffy are flabbergasted. Steffy worries about her history, but the doctor sees no reason she shouldn’t carry to term. As Liam and Steffy embrace, her joyful expression changes as she flashes to sex with Bill.

Liam and Steffy react differently to their big news.

Ridge Surprises Brooke With a...