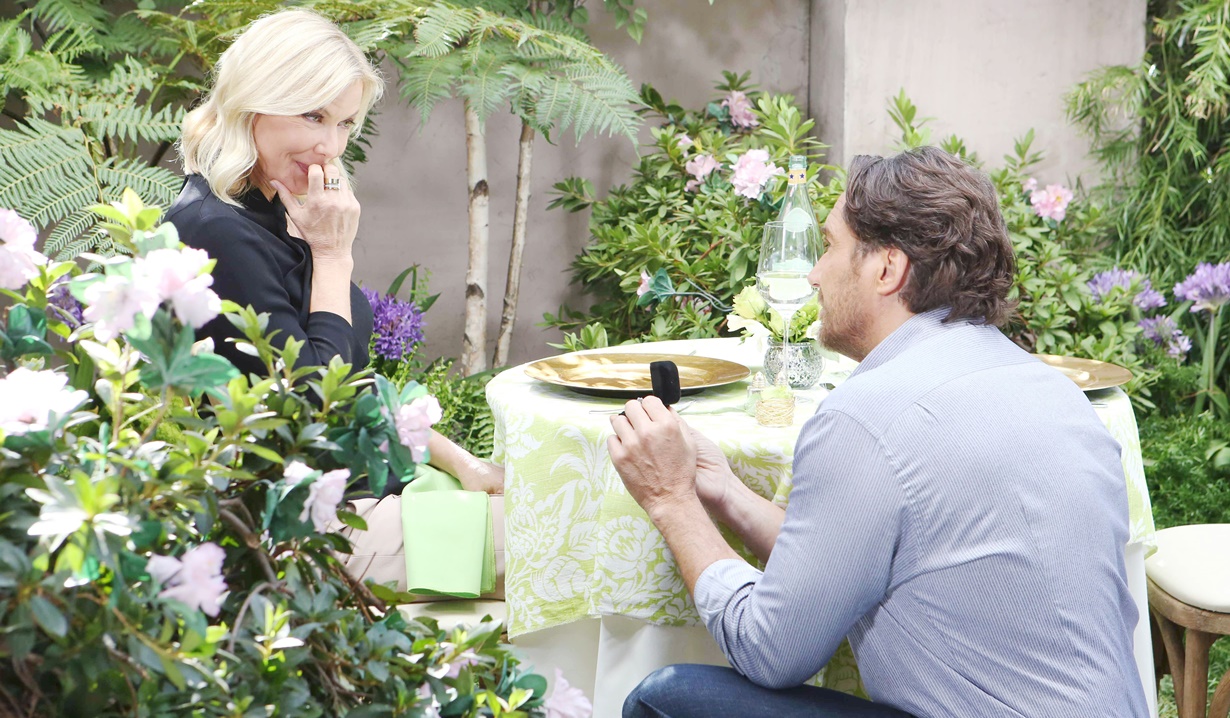 At home, Liam and Steffy decide to ‘catch some waves’. Liam enthuses about how much he loves her and Steffy laughs happily. When he emerges in his swimsuit, the mood turns more intimate until Steffy runs outside. Later, they return, and toweling off turns to kissing. Steffy tells him their marriage is her priority now; nothing else will ever come close. Steffy gets dressed because she has a doctor’s appointment; just a check-up. Liam offers to come with her, but decides he’ll go back to the office. He notes he would not have the relationship he’s enjoying with Bill if not for her. Steffy is incredibly grateful to be his wife. She gives him a ‘Cha cha cha’ as she leaves.

Thorne enters the Forrester mansion after a swim. He thanks Eric for use of the pool, and his father urges him to move in there – the offer stands. Thorne wants to discuss what they’re going to do about Ridge and cites his blatant disrespect for Eric and his marriage. Eric doesn’t want to talk about it, and warns Thorne he needs to slow down a bit; he wants peace in the family. Thorne says, “Okay, but are you at peace with how he treated you?” Thorne pulls up Aly Designs on his tablet and reveals to Eric that he is the designer. Eric wonders if Ridge knows. Thorne says only Brooke does, and now him. Eric is thrilled. Thorne really wants a chance to work with Eric. “I’m a designer.” Eric crows, “Yes, you are.” Thorne adds he loves Eric and won’t disrespect him the way Ridge has. Eric cautions against undervaluing Ridge’s contribution to the company. Thorne wants a chance to run the company with Eric – he’s done hiding in the shadow of Ridge and he’s speaking out about the mockery he’s made of their lives. Thorne complains about Ridge treating both Brooke and Eric like doormats – he won’t let his brother ruin Brooke’s life again. Eric asks if Thorne’s hoping for a future with her himself. Thorne admits it, and confirms he told her how he feels. At Brooke’s place, Ridge arrives and says he has a surprise for her. He takes her outside where he has a romantic lunch set up complete with a team of wait staff. Brooke marvels at him pulling this off – she was home all day and didn’t notice. They reminisce about Ridge spoiling and indulging her. Ridge hopes to do it for many years to come, and says this surprise is just the beginning. He wants what they had again, and doesn’t want to wait. Ridge admits to his mistakes, but insists he’s learned from them. Ridge gets down on one knee, produces the engagement ring, and proposes.

At the doctor’s office, Steffy flashes to Liam making her laugh. The doctor looks at her quizzically, and she says she’s fine.

Steffy Learns Ridge Will Propose to...