Wednesday December 13, 2017: Steffy and Ridge discuss love and forgiveness, Bill’s guilt gets to him, and Steffy assures Liam of his importance to her. 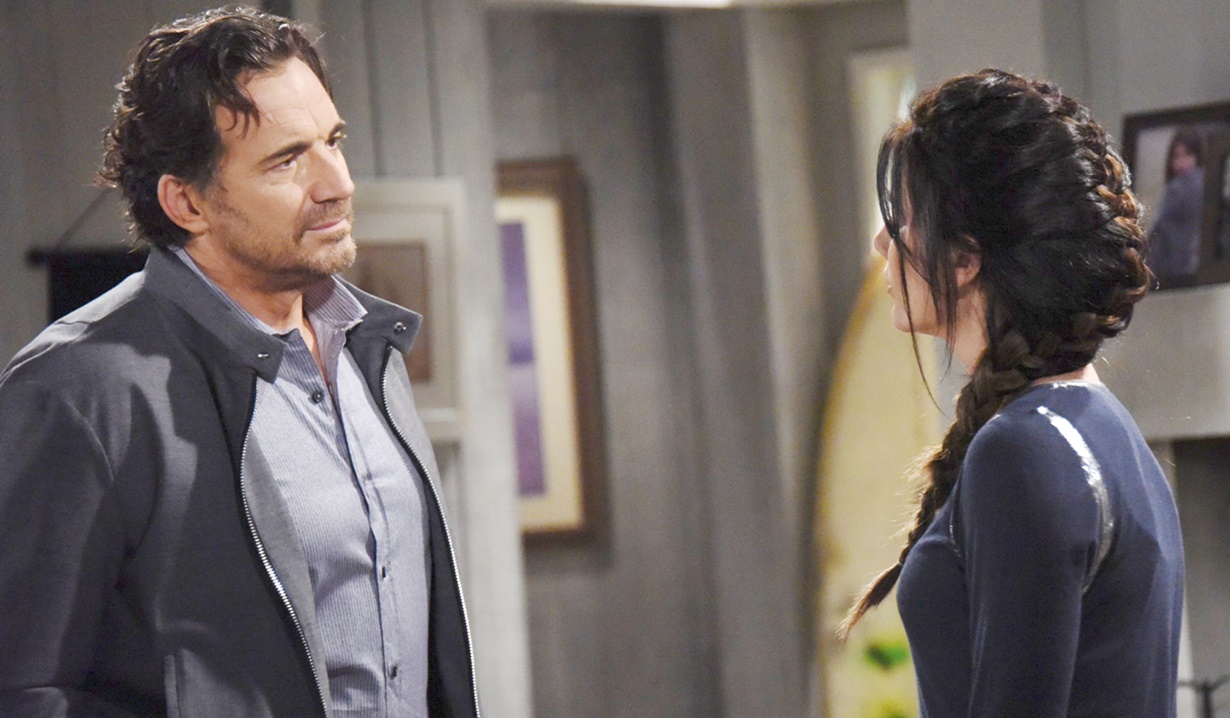 At the Malibu house, Ridge tells Steffy she hasn’t been herself lately, but seems okay today. Steffy assures him she and Liam are putting the Sally incident behind them. Ridge observes that people do bad things; it doesn’t mean they’re bad people, and talks about forgiveness. He’s proud she forgave Liam. Steffy shrugs that marriages are challenged – you can’t get stuck in the blame and guilt, you have to move on. She vows nothing will come between her and her husband again. Ridge ruminates that sometimes you have to almost lose what you care about to realize how precious it is. He reveals an engagement ring, and Steffy enthuses that Brooke will love it. Ridge isn’t sure how Bill will react when he learns he’s lost the woman he loves, but really doesn’t care. He goes on about Bill being a shark. Steffy doesn’t want to talk about him. She wants to focus on the new beginnings for all of them. She’s so fortunate to be loved by Liam. Ridge and Steffy embrace.

At Spencer Publications, Bill snaps at Wyatt, Liam, and Justin. Liam presumes this is about Brooke – it’s like he’s on another planet. Justin’s never seen him like this. Liam soothes that they know what he’s going through – he just lost the woman he loves. He coaxes his father to believe he’ll find love again. Bill rants; he’s not up for talking about feelings, but Liam insists he understands – he had the same feeling when Steffy walked out on him. He doesn’t know where they’d be if she hadn’t come back. Liam marvels that Steffy apologized to him. He recounts how he learned Steffy had gone to the guesthouse from Quinn, and that Steffy admitted it. Bill thinks it really doesn’t matter where she was, but Liam feels that whatever happened at the guesthouse caused Steffy to find peace and forgiveness. Liam refocuses on what Bill’s feeling. He reflects that nothing’s more important to him than family…even when it’s not reciprocated. Bill snaps at him to stop, but Liam goes on about the opportunities Bill’s afforded him. Bill gets choked up telling Liam how much he means to him. They embrace. Later, Bill tells Wyatt and Justin that Liam’s gone home – his first priority right now is Steffy. As Wyatt goes on about Steffy forgiving him, Bill gets uptight. Wyatt and Justin are dispatched to pick up Liam’s slack and Bill screams at Wyatt to get him a report on a division…any division! Once alone, he flashes to caressing Steffy.

Liam joins Steffy at home, and relays his father gave him the rest of the day off. Steffy reflects on the special moments they’ve shared together and tears up as she flashes through the highlights of their relationship. When she’s with him, everything makes sense. “I love you so much.” Liam kisses her.

Thorne reveals a plan to Eric.

Ridge Surprises Brooke With a...