Tuesday December 12, 2017: Quinn designs engagement rings for Ridge, RJ learns of his father's plans, and Maya and Nicole catch up. 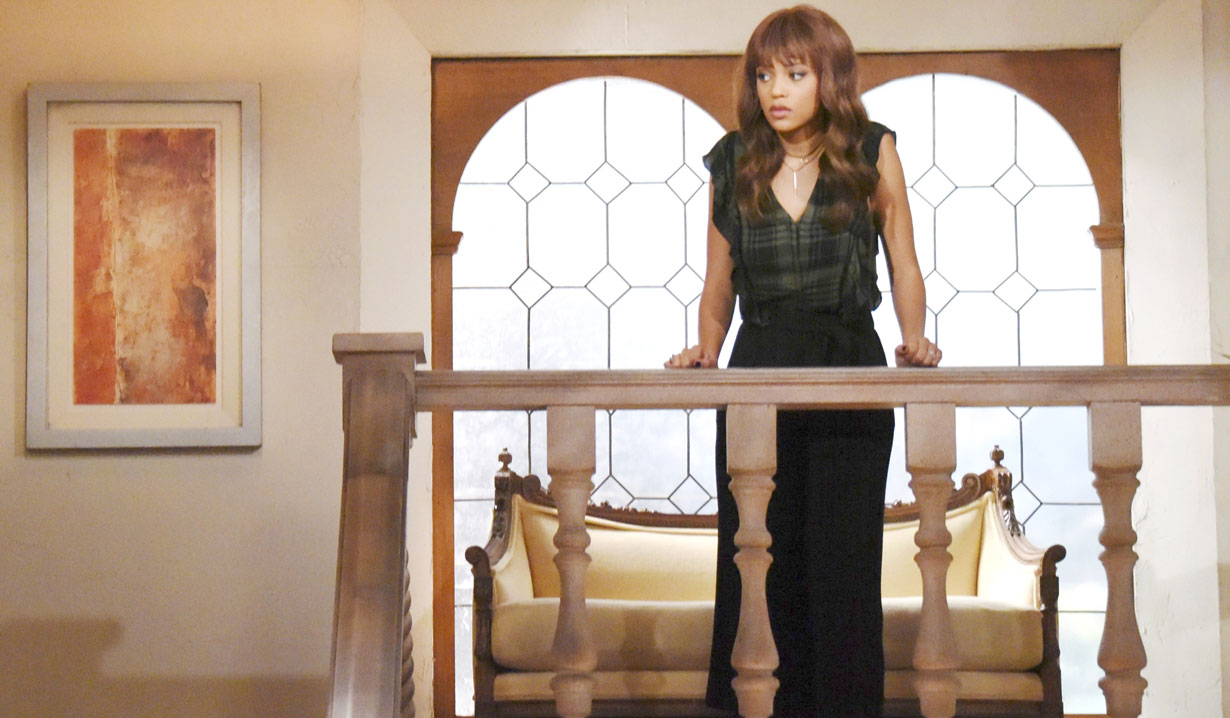 At Brooke’s place, she reacts to Thorne’s kiss by musing that he’s full of surprises. She’s not offended and remarks that he has everything a woman could want in a partner. Thorne suggests maybe they should give a relationship another try. Brooke demurs that she has a son with Ridge. Thorne says he’s grown and Ridge will let her down again. Upstairs, Maya shares her experience in South Africa with Nicole, who gushes about their lives right now. Her eyes have been opened since moving to Paris. Maya thinks she’s more mature. Talk turns to Thorne returning – they discuss him staying there at Brooke’s house at her insistence. Nicole walks out onto the stairs landing in time to see Thorne, in close proximity to Brooke, trying to persuade her they’d be good together. Nicole returns to her room and tells Maya how close the pair looked. Maya wonders if something’s going on between them – they were married. Nicole thinks Thorne has time to press his case. They worry about what a Thorne-Ridge feud might do to the family. Downstairs, Brooke talks to Thorne about getting along with Ridge, but he’s focused on Brooke. Not fighting for her was one of his biggest mistakes. “Don’t be so quick to commit to a future with my brother. Consider your options.” He asks how she can even consider spending her life with someone who thought so little of her. Brooke recounts what happened in Australia. Thorne urges her not to make excuses for Ridge and give herself a chance at true happiness.

At Forrester Creations, RJ is stoked when Ridge looks at his drawing and says he has potential. He’d like to guide him. Talk turns to Thorne. Ridge grumbles that his brother should keep his day job in Paris, and warns he’s trying to cause trouble between him and Brooke. He won’t let it happen. RJ wonders if his father has a plan. Ridge alludes to a surprise – he thinks Brooke will love it. Quinn and Ivy interact with the new star intern, Simon (played by Achilles Andreas of Greece). Simon pretends to propose to Ivy with a ring Quinn has designed. Ivy and Quinn discuss whether Ridge and Brooke will get back together. Ivy says nothing’s a given. Quinn joins Ridge in the boardroom and presents her ring designs. They joke about the kisses they shared – they’ve come a long way. Quinn has no doubt he and Brooke will figure things out. Ridge relays that Thorne knows about them, and has Brooke reliving it.

At Brooke’s house, Thorne pushes ‘ignore’ on her phone when Ridge calls, and tells her it’s time to say ‘no’. He will treat her the way she deserves to be treated. “You cannot marry my brother. If you’re going to marry anyone, you marry me.”

Steffy Learns Ridge Will Propose to...