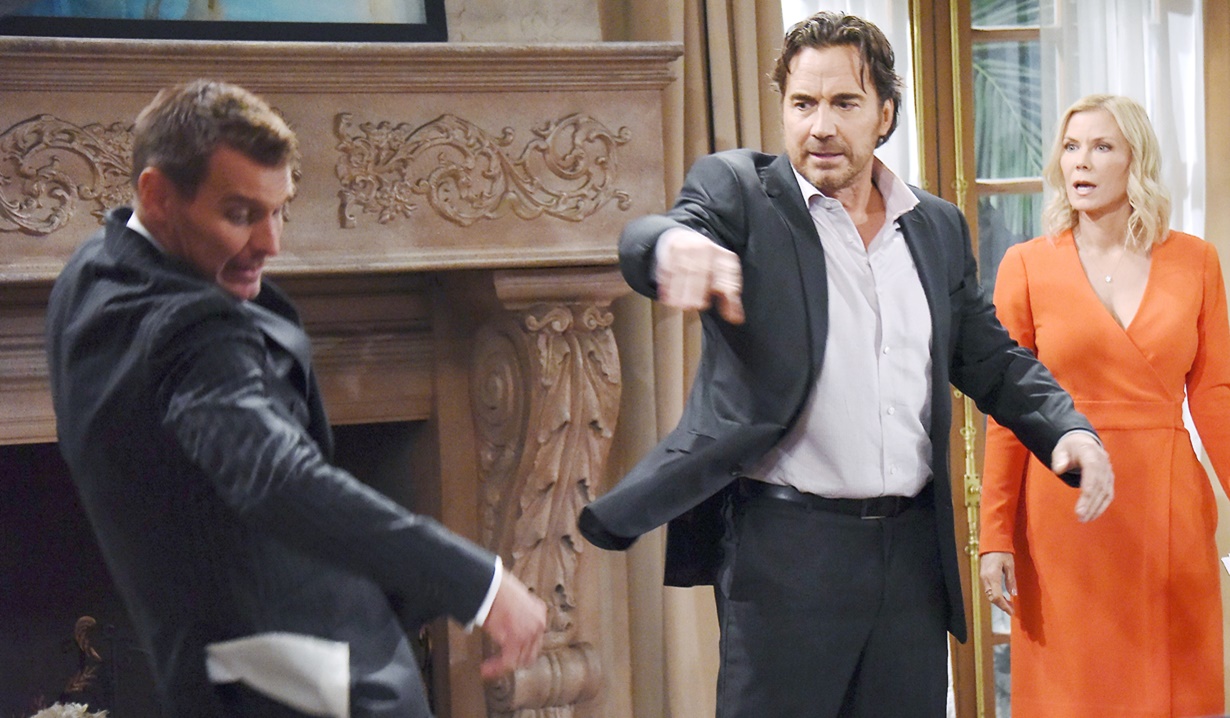 At home, Liam grills Steffy about her reasons for going to the guesthouse the night they fought…and why she didn’t want him to know about it. He asks if she was considering moving back in there, and Steffy denies it. Liam wants to know the truth about what happened between the time they fought and her return home. He’s puzzled when she says she’s angry at herself, and not at him, and that she did something wrong. Liam guesses she wanted to be alone and knew she would freak out that she was contemplating leaving him, so told him a story instead. Steffy is so, so sorry. They agree they will both try harder and Steffy muses about falling in love all over as they canoodle. Liam talks about all the good things in their relationship and wonders again why she seems so sad. He believes she’s stuck back on that night and asks her to say, “It never happened,” before getting her to give him a ‘Cha cha cha’.

At Brooke’s place, Ridge is still on the floor after Thorne shoved him. Ridge mocks his brother’s plan to return and restore morality to the family. Brooke enters and exclaims at Ridge on his seat, and asks Thorne, “What did you do?” The men bicker and Brooke tells them to stop it and show respect for one another. Thorne wonders if Ridge even knows how and asks, “How much respect did he show you and my father with Quinn?” The insults continue until Brooke asks Ridge to leave. Ridge sneers that Thorne keeps pointing out he’s a Marone, but Thorne doesn’t have any design talent. Things get nastier until Ridge pushes Thorne down onto the sofa, then exits, saying, “That felt good.” After, Thorne talks to Brooke about her feelings for Ridge. She doesn’t like to be alone and wants to feel like she belongs to somebody. Thorne suggests she doesn’t have to be with Ridge – there are other ways to not be alone. Brooke is stunned when he kisses her deeply.

More: Patrick Duffy and soap stars in Christmas With a View At Forrester Creations, Maya and Quinn discuss jewelry design. Talk turns to Steffy’s bracelet and Quinn reveals Liam never knew his wife had gone to the guesthouse. Quinn supposes even married people want to have secrets. Maya cautions Quinn about telling anyone else the story behind the bracelet inspiration – she must remember it was hurtful having everyone discussing her marital issues.

Nicole tells Maya what she saw.

Liam Discovers Steffy Lied to Him...