A Sobbing Steffy Begins to Confess Her Betrayal to Liam

Friday December 1, 2017: Steffy and Bill debate her plan to come clean, Sally vows to be there for Liam, and Darlita has romance on the brain. 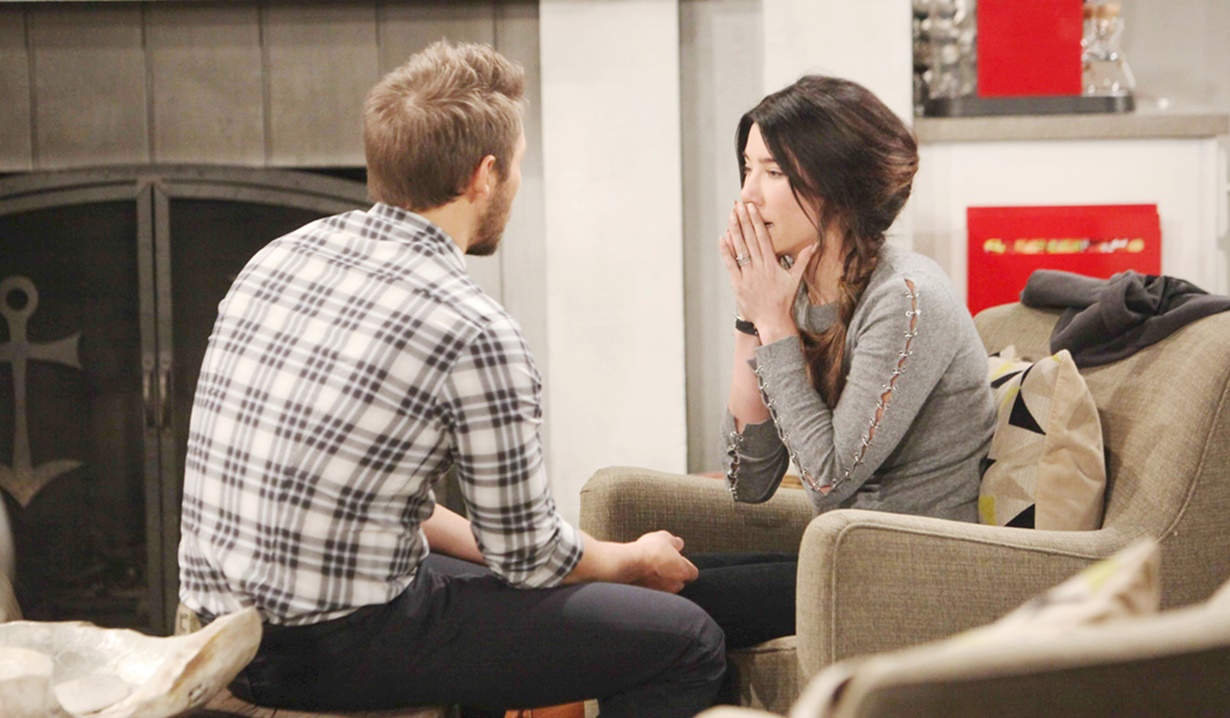 In Bill’s living room, Steffy disagrees with him that they are ‘meant to be’. Bill reflects that he will honor his relationship with his son. He urges Steffy not to come clean; nothing good will come from Liam knowing about that night. Steffy gets upset when he refers to them making love. Bill thinks she’s in denial about it, but he can’t lie to himself, or to her, about what it meant to finally be with her. Bill warns her again about relieving her guilt by confessing. Steffy reiterates that she can’t leave Liam and run off with Bill. He repeats that if she tells his son what happened, Liam will leave her. They debate some more about whether their liaison was indecent. Bill insists it was love, but Steffy wishes it never happened. She’s convinced Liam has to be told and warns Bill to be prepared for anything. After, Bill stews alone.

More: Casting news for B&B and all soaps

At Liam’s house, he offers Sally peanuts and they discuss Bill’s offer to help Spectra get back on their feet. Talk turns to Liam’s vow renewal. Sally’s relieved that she didn’t cause the break-up of their marriage, but thinks it’s a shame they cannot be friends. Liam begins, “In time…” Sally says, “In time the things that brought us together will no longer be there.” She assures him if he ever needs her, she’ll be there and won’t give a damn who knows it. Liam smiles after her departure. After, Steffy arrives home and steels herself to confess. Liam mentions Sally stopped by and was puzzled that Steffy didn’t work her over with brass knuckles at Thanksgiving. He goes on about his wife being amazing, but she sighs deeply and speaks cryptically about everything being gone. Soon, she’s sobbing and hollers that she can’t pretend anymore! Liam presumes she felt trapped into the vow renewal and beats himself up. Steffy interrupts – she just wants him to love her. Liam’s confused. Steffy cries, “This isn’t about you, it’s about your father!” In Coco and Sally’s apartment, Darlita and Coco play cards. Darlita reflects on Sally and Liam going to the hospital after inhaling the demolition dust and finds it romantic that they have bits of Spectra inside them forever. She feels Liam would be irresistibly drawn to Sally if Steffy wasn’t in the picture. Later, Coco confesses to Sally that she talked to Darlita about Sally kissing Liam. Sally isn’t impressed, but switches gears to recapping her visit with Liam. She doesn’t know if he was happy to see her, but he’s happy with Steffy. The sisters discuss Sally’s love life. She now knows what to look for, and the person she has to be to deserve a man like Liam.

Bill Talks Steffy Out of Confessing...