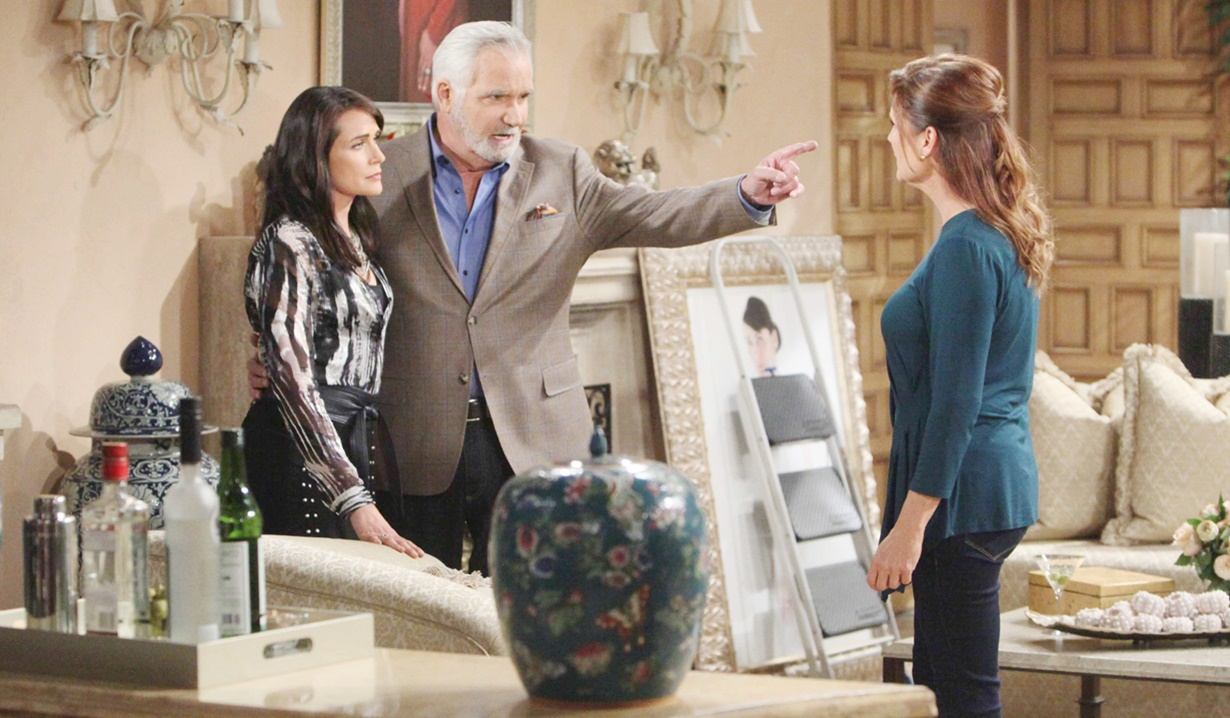 At the Forrester mansion, Quinn informs Sheila she will be Mrs. Eric Forrester forever. Sheila pleads with Eric to tell his wife what he knows. Mateo appears. Sheila implores the estate manager to explain that Quinn crossed the line. Mateo announces he told the truth – that Sheila hired him to seduce Quinn. He apologizes to Eric. Quinn sneers that Sheila was the one who got played. It dawns on Sheila that Eric knew all along, when he was saying those things to her at the restaurant. Eric points out how it feels to be tricked and calls her out for trying to manipulate everyone there – it’s very ‘old school’ Sheila; she hasn’t changed one bit. Eric wants her out of his life and his house, and declares that Quinn is Mrs. Forrester, something Sheila will never be again. Sheila tries to defend her thinking, but Eric hollers at her. Mateo makes a heartfelt speech about his regret before being sent off to retrieve Quinn’s portrait. Eric then turns back to Sheila, and lashes out that she’s as devious as ever. Quinn hisses that Sheila’s a psycho who got her own portrait done – she planned this all along. Eric wants Sheila to leave immediately. Sheila insists she didn’t think Quinn was worthy – she proved her wrong. Sheila speaks to Eric alone, and expresses regret about ruining the friendship they were building, noting how he stood by her when she was wrongfully accused. She will dream about one day being a part of all this. Eric urges her to let go of that dream and leave L.A. Sheila knows a part of him still finds her fascinating, and for now, that will have to be enough. “I’m going to miss you. My husband…my ex-husband.” Outside the door, Sheila turns and is startled to find Quinn right in her face. Quinn orders her off the property. “Goodbye Sheila. Goodbye forever.” Once alone, Sheila laughs manically.

At Katie’s place, Wyatt pleases his girlfriend with news that he asked his mother to accept them, and that Quinn is focused on someone she dislikes even more – Sheila. He explains Carter is trying to sabotage his mother’s marriage. They discuss Sheila’s scheme involving the estate manager who is also a masseur. Katie exclaims that she should get herself one of those. Wyatt growls that she already has one and they kiss. Wyatt goes on about his father and brother making up as Katie steps out of the room. He gets beeped that Bill is calling a meeting, but Katie reappears in lingerie and purrs, “First things first.” Wyatt is sufficiently distracted, and helps her peel off his shirt as they begin kissing passionately. After sex, Wyatt admits this part, with the snuggling and talking about their feelings, is his favorite part. Katie invites him to come back after his meeting. There’s no place he’d rather be.

Wyatt confirms his loyalty to Bill.