Thursday October 5, 2017: Steffy and Liam disagree, Sally and Steffy square off, and Wyatt argues with Liam. 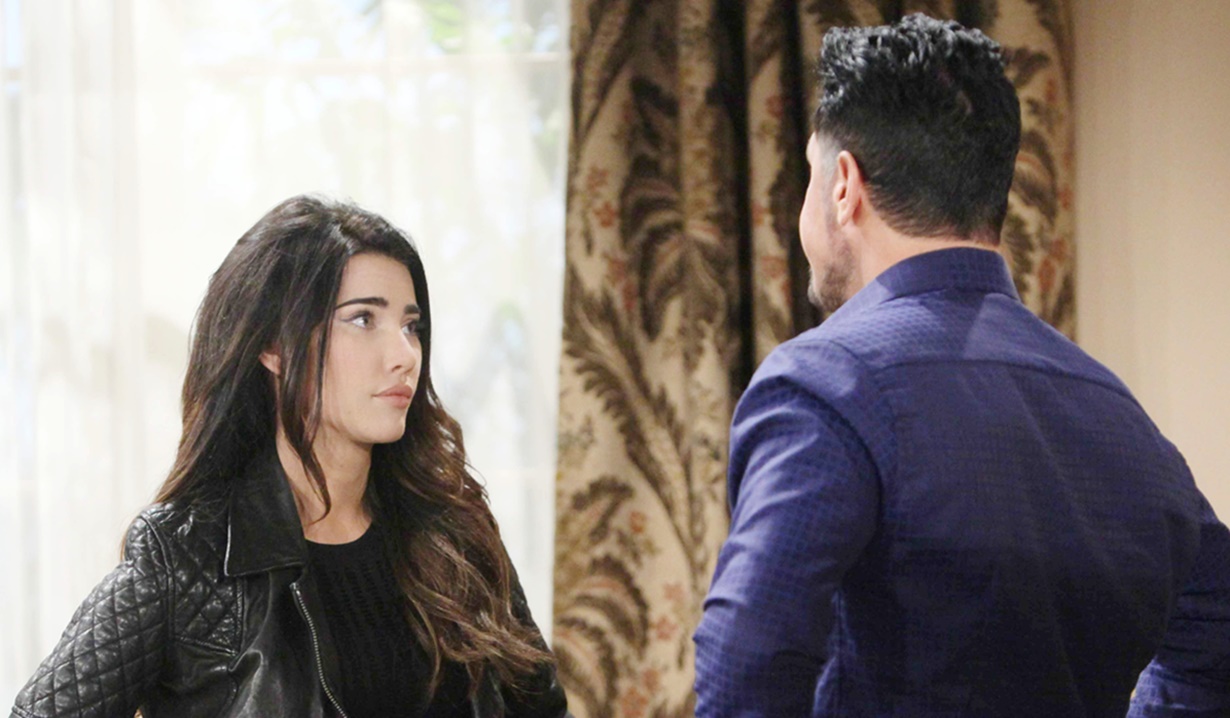 At Spencer Publications, Steffy rants that Liam is being played by Sally, her arch-rival.

Liam argues that his obligation to right his father’s wrongs is separate from his obligations to her as a husband – she’s taking offense over something that has nothing to do with her. Steffy complains that he’s doing everything in his power to help Spectra succeed when they’ve stolen from her family. Liam insists that’s changed, and Steffy wants to know when he’ll stop. Liam explains why handing Sally a smoking pile of ashes wasn’t enough. Steffy understands he thinks he’s doing the right thing, but says the only person he really owes is his father.

In the Spectra office, Shirley opines to Sally that Steffy is bound to dump Liam sooner or later – it’s in her genes – so there’s nothing wrong with her ‘putting her bid in early’.

They bicker until Steffy arrives. Shirley exits, and Steffy confronts Sally about how much she intends to take from her husband. “Spectra isn’t Liam’s problem, it’s yours. You fix it!” Sally counters that she has never asked Liam for anything. Steffy accuses her of accepting gifts from wealthy men and challenges her to give it all back. Sally snaps that it’s easy for Steffy to take the moral high ground when she’s never faced adversity. Steffy reissues her challenge and exits.

At Bill’s place, he shreds tax records and angrily spouts off to Wyatt about the press hounding him – they smell blood from the knife put in his back by his ingrate son. He learns Wyatt was at Forrester, but Brooke wasn’t there. Bill muses that she’s staying away for the sake of appearances, and wonders aloud why he couldn’t have just left Spectra alone.

Wyatt breaks the news that Liam asked him to help run the company, but quickly assures Bill he turned him down. Bill warns if Liam doesn’t come around soon, he’ll regret ever hearing his name. Later, Steffy arrives and updates Bill on Liam’s plan to take Sally to San Francisco. Bill’s furious. Steffy says, “You lit this match, now it’s going to burn.” Bill flashes to kissing Steffy on a bed in the past and looks thoughtful. Steffy asks, “What’s wrong?”

Wyatt arrives in Liam’s office as he is asking about a Spencer employee’s (played by Kevin Ashworth) sick daughter. After, Wyatt warns that these people who love Liam will follow him off the cliff when he bankrupts the company. He reveals he’s been to see Bill, and proposes they scout new locations for Spencer Towers. Liam refuses – it’s wasteful. Wyatt argues about the retainer they’ve paid to Whitman & Associates, and Liam informs him Sally will be using them instead. Wyatt mocks Liam making all these new friends, and warns his plan to take a trip with the anti-Steffy could cost him his wife. Is he stupid?

Wyatt opens up to Katie.

Bill Warns Ridge to Stay Away From...

A Shocked Sally Learns That Bill Had...