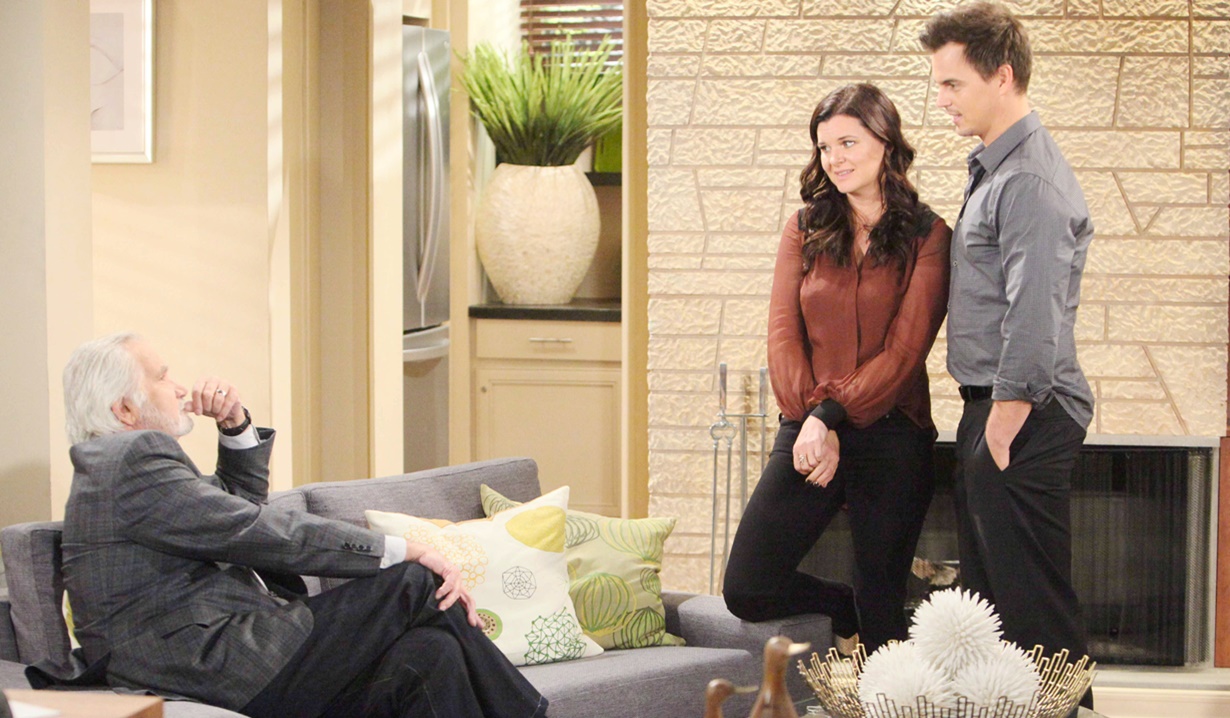 At Katie’s place, she stammers to Eric, “I wasn’t expecting you!” He eyes her up sitting on a shocked Wyatt’s knee.

When Eric apologizes for interrupting, awkward rambling ensues until Katie and Wyatt come clean that this has been going on since Monte Carlo. Eric muses that they sort of make sense to him. They admit no one else, including Bill, knows and they would rather Eric didn’t tell Quinn. After Eric’s gone, they speculate about whether or not he will keep their secret from his wife. When Wyatt ruminates that Quinn and Bill would go ballistic, Katie paces and suggests maybe they should reconsider their ‘infatuation’. Taken aback, Wyatt insists it’s more than that to him. He comments that they are truly there for each other, and besides, she drives him crazy. They make out. Wyatt realizes he’s not actually worried. Katie wants to keep the world out as long as possible.

In the Forrester mansion, Sheila learns from Mateo that he was promoted to full-time. Quinn calls out, and Sheila whispers to Mateo not to give away her presence as she hides. Quinn joins Mateo to chat and clucks over his admission that things didn’t work out with his girlfriend.

The lady of the house is grateful Mateo is overseeing the work at the house now. They bump heads as she moves to go upstairs. Mateo rubs her head. Once she’s gone, Sheila reappears. She really likes Mateo, and thinks they could help each other. Sheila leaves him with her hotel information, warns him to keep their meeting between them, and exits, saying, “See you later.” Later, Eric finds Quinn in the living room. She wonders where he’s been and he acts cagey. Talk turns to Katie. Quinn thinks she has the hots for Eric, who insists it’s not true. The conversation switches to rearranging furniture and Quinn throws her back out. Eric comforts her and they look at her portrait – he can’t imagine ever taking it down.

In her hotel room, Sheila stares at her portrait and flashes to good times with Eric. Mateo arrives. He admires the painting and she alludes to a job that pays a lot of money. Mateo remarks that his mother is ill, and he does need cash. Sheila learns he’s a masseuse. She dangles the promise of big money – $100,000 – and explains she loves Eric and used to be married to him; she wants him back since Quinn cheated on him with his son. Mateo learns she wants him to make a move on Quinn, and resists. Sheila presses cash into his hand – if he takes the job, there’s a lot more where that came from. Once alone, Sheila vows to be Eric’s wife again and cackles.

Liam has a surprise for Sally.

Sheila Blabs to Eric After Seeing...

Bill Warns Ridge to Stay Away From...