Monday October 2, 2017: Quinn and Ivy catch up, Sheila finds work, and Eric is pleased with his new employee. 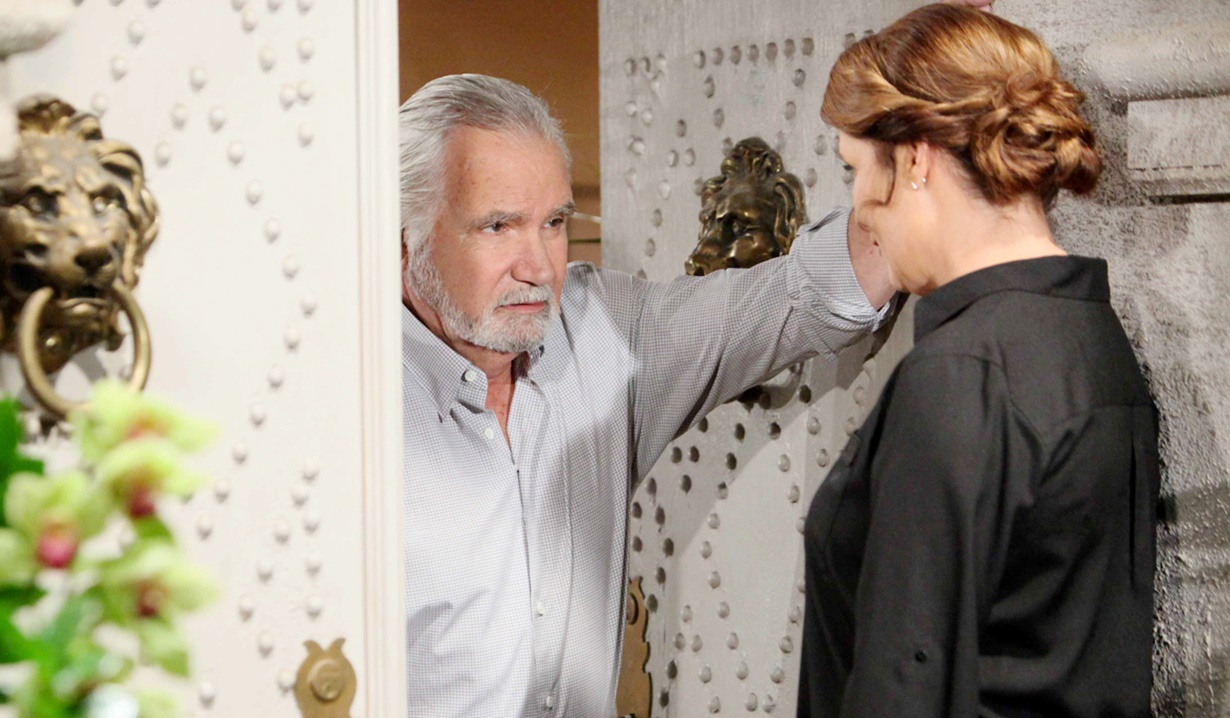 Quinn admires Ivy’s jewelry pieces at Forrester Creations. Ivy thanks her, and talk turns to things going great with Quinn and Eric.

Quinn is glad they haven’t heard from Sheila for a while – that woman is dangerous. Ivy wonders how Quinn can be sure they’re rid of her. Quinn notes one can never let their guard down where Sheila’s concerned, and vows that if she does try anything again, she will not get her fangs into her husband. She pays Ivy more compliments before reverting to Sheila’s manipulative ways again. The conversation turns to Ivy’s love life. She alludes to having met someone new, but doesn’t want to jinx it. They worry about Wyatt not dating. Quinn asserts that if Wyatt were dating someone, she would know.

At Il Giardino, Sheila chats with the hostess (played by Big Brother’s Jessica Graf). After, the restaurant manager (played by Carl Zauner) approaches Sheila and tells her she’s doing a great in her first week on the job. Across the way, Sheila notices Katie arrive. Soon after, Wyatt appears, and Sheila is intrigued to see they seem flirty. By the door, Katie and Wyatt debate waiting to be seated. Wyatt teases about going back to Katie’s place, and mentions Liam’s offer to help him run the company. Sheila watches with a grin as they sneakily share a kiss.

At the Forrester mansion, Eric is very impressed with what the new estate manager, Mateo (played by Francisco San Martin) has done with his organic solutions and notes his wife is very pleased as well.

They continue to chat about chemical-free fertilizers and such as Eric declares he wants to keep his family safe. They agree that Mateo will stay on as the full-time estate manager. Later, Eric is taken aback to find Sheila at his door. She talks her way inside, and reveals she got a job at Il Giardino. Mateo appears briefly, and once he’s gone, Sheila reports to Eric what she saw at work – Quinn’s son kissing Katie Logan. She asserts it wasn’t just a friendly peck she misconstrued, and informs him they’re together at Katie’s house. After, Sheila runs into Mateo, and introduces herself after saying how handsome he is.

At Katie’s place, Wyatt’s not concerned with lunch, and they kiss passionately on the sofa. Katie pauses to put music on, and Eric knocks at the door. He opens the door to see Katie, perched on Wyatt’s lap, kick off her high heels as he kisses her neck. Katie startles upon noticing her neighbor and screams, “Eric!”

Sheila comes up with a new plan.

Eric Is Asked to Keep Katie and...

Racism Is The Root Cause Of Health Inequities Between Whites and Blacks, Says L.A. County Director Of Public Health Barbara Ferrer