B&B Recap: Thomas warns Bill not to pull any tricks in Monte Carlo 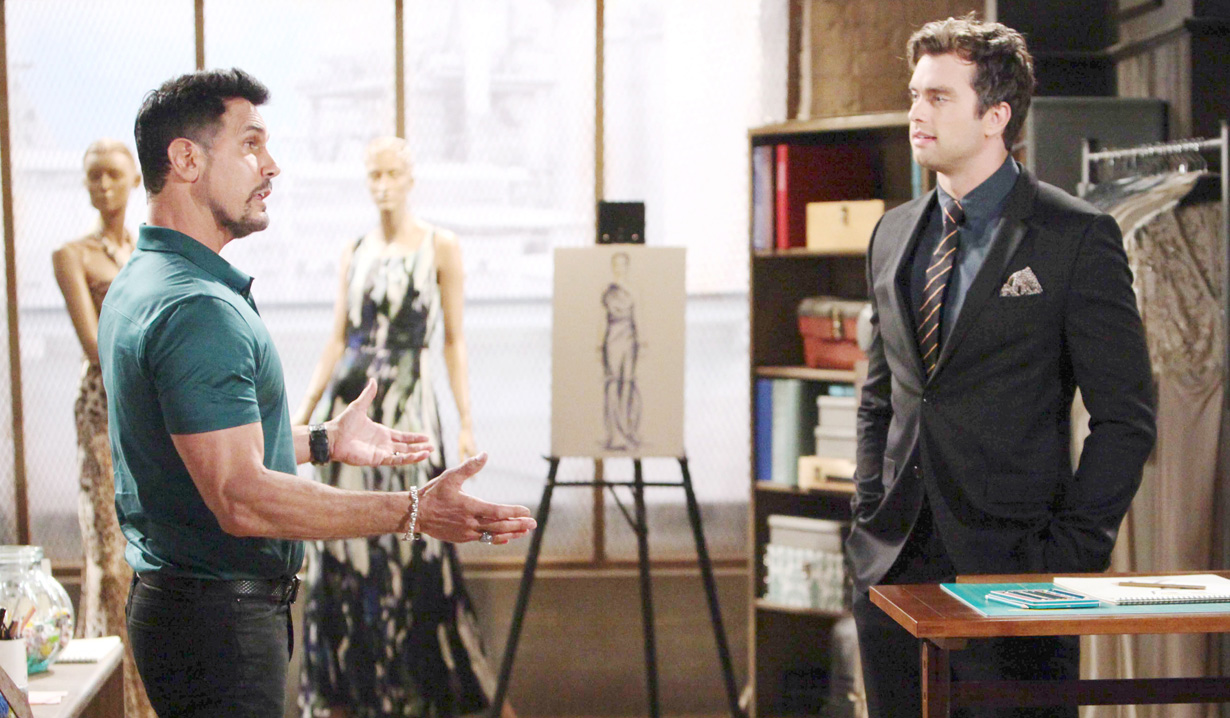 At the Forrester mansion, Steffy flashes to Ridge confirming his affair. Quinn appears. Steffy confronts her about betraying Eric, and confirms she heard it from Ridge.

Quinn launches into how foolish it was, and expresses regret. Steffy isn’t surprised Quinn hurt her grandfather and cringes at believing she was good for him. Quinn rasps that she lost the love of her life! Steffy gets emotional about her grandfather leaving the home he loves. She informs Quinn she doesn’t belong there – if she has any decency she’ll leave the house, and Eric’s life, for good. Quinn grimaces. She applauds Steffy’s protectiveness of Eric and makes a heartfelt appeal for her to intervene with Eric. “Do it for him.”

In the office at Forrester Creations, Katie and Brooke arrive as Ridge gets an update from Patrice, who exits. Brooke notes Ridge seems distracted. Sighing, he admits that Steffy knows about him and Quinn, and hopes she’ll forgive him. Katie muses she must not be too happy with Quinn right now. Brooke assures Ridge he’ll never lose Steffy.

At Spectra Fashions, Sally listens unseen as Thomas complains about Bill lecturing him. Bill retorts that Caroline wants to give him a stable home and family – he knows Thomas loves her; how could he not? Sally slips out. Thomas informs Bill he wanted a life with Caroline, but got tired of waiting. He’ll never abandon his son, but the woman in his life is Sally. Talk turns to business. Bill mocks Thomas’ assertion that Spectra will succeed in Monte Carlo – the company is doomed. Forrester wonders if Bill is hinting at a trick up his sleeve, and warns if he does anything at the fashion show he’ll take him down with him. Bill goes on about Thomas’ legacy at Forrester and urges him to leave this insanity behind him and start a life with Caroline and Douglas.

At Il Giardino, Sally thanks Caroline for meeting her and muses it was a big mistake for her to leave Thomas. Caroline notes Sally’s insecurity, and confirms she wants Thomas back in her life. Sally feels trying to drag Thomas back to New York using his son as bait isn’t very classy, and advises Caroline that he’s not her guy. The redhead goes on to say Thomas will be there for his son, but not her. “We’re the real deal, Caroline,” Sally snaps before walking out.

Back at Spectra, Sally fills Thomas in on her meeting with Caroline, and notes she and Bill are working together to lure him away from her. Thomas warns jealousy and insecurity kills relationships and reconfirms his commitment to Sally. They kiss.

Bill and Caroline reconvene at Spencer Publications and compare notes on their respective meetings with Sally and Thomas. Bill makes dark predictions about Thomas’ life if he doesn’t end this chapter. He embraces Caroline and glances toward his skyscraper as he assures her this will work out.

Sheila’s unimpressed when Steffy returns to the hotel.

The Bold and the Beautiful is...