Monday July 17 2017: Sheila participates in a ruse, Quinn and Ridge go over the situation with Eric, and Steffy's discussion with Ridge takes an unexpected turn. 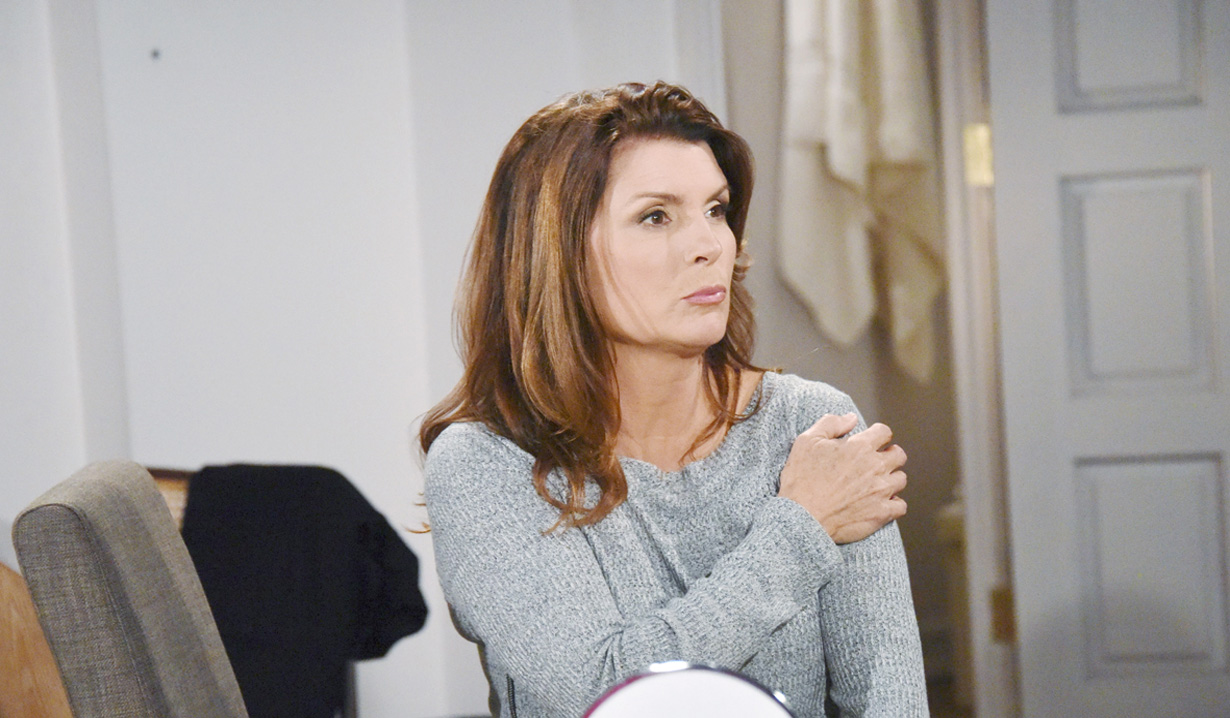 In the hotel room after a shot rings out, Eric shouts, “What have you done?!” Steffy protests that Quinn said Sheila had a gun in her bag. Liam realizes Steffy missed Sheila and pleads with Eric not to call anyone.

Sheila shakily sits up and reveals what she pulled from her purse – Eric’s medications. Eric complains about the younger pair believing Quinn, as they notice Sheila’s upper arm was grazed by the bullet. Eric wants to call 911 but leaves it up to Sheila, who insists it’s not a critical injury and she’ll be fine. Steffy grudgingly apologizes as hotel security hammers on the door. Liam tells the men the shot didn’t come from their room. Unconvinced, they ask to look in the restroom, where Sheila hid. She emerges in a robe and claims she heard a gunshot while preparing to shower. The security men are sorry and leave. Eric thanks Sheila sincerely. Steffy still wants information. Eric insists they’re not shacking up, and admits to having argued with Quinn. Steffy feels this is crazy and demands to know what’s going on.

Liam goes out for ointment, tape, and gauze. Steffy is unable to convince Eric to go home and presses unsuccessfully for more details. Liam presumes Quinn showed her true colors. Eric forbids Liam and Steffy to tell anyone where he is – especially Ridge. Steffy is puzzled. Eric will only say she’s more trustworthy than he is, and threatens to leave if they reveal his whereabouts. Steffy hugs Eric and leaves with Liam reluctantly. Sheila and Eric reflect on Steffy’s love for her grandfather. Eric muses she’ll go to Ridge now. He tends to Sheila’s wound and she teases about his handsome beard. Sheila admits she let Quinn believe she had a gun and Eric notes she has a history of being erratic. Sheila tells him he deserves better than what Quinn and Ridge did to him. Eric grunts, “Nice guys finish last,” but Sheila asks, “What makes you think you’re finished?”

At Forrester Creations, Quinn tells Ridge that she and Sheila had a fight. Ridge notes no one knows where Eric is, and they wonder if Sheila would harm him. Quinn suggests they call the police and place a missing persons report, but Ridge doesn’t want to alarm his kids. They rehash their attraction for one another and how Sheila put it all together. Talk turns to work briefly before Ridge starts stressing about how he’ll explain his actions to his children. Later, Steffy finds herself alone with Ridge and alludes to having had a rough day. She brings up Eric’s disappearance and questions what could be so bad he’d take off with Sheila. Steffy knows Ridge is somehow involved in Eric’s quarrel with Quinn. She knows they didn’t have an affair, but Ridge’s silence and expression say otherwise.

Ridge talks to Steffy about the affair.

B&B Recap: After a shooting, someone...