B&B Recap: Quinn accuses Katie of trying to kill her 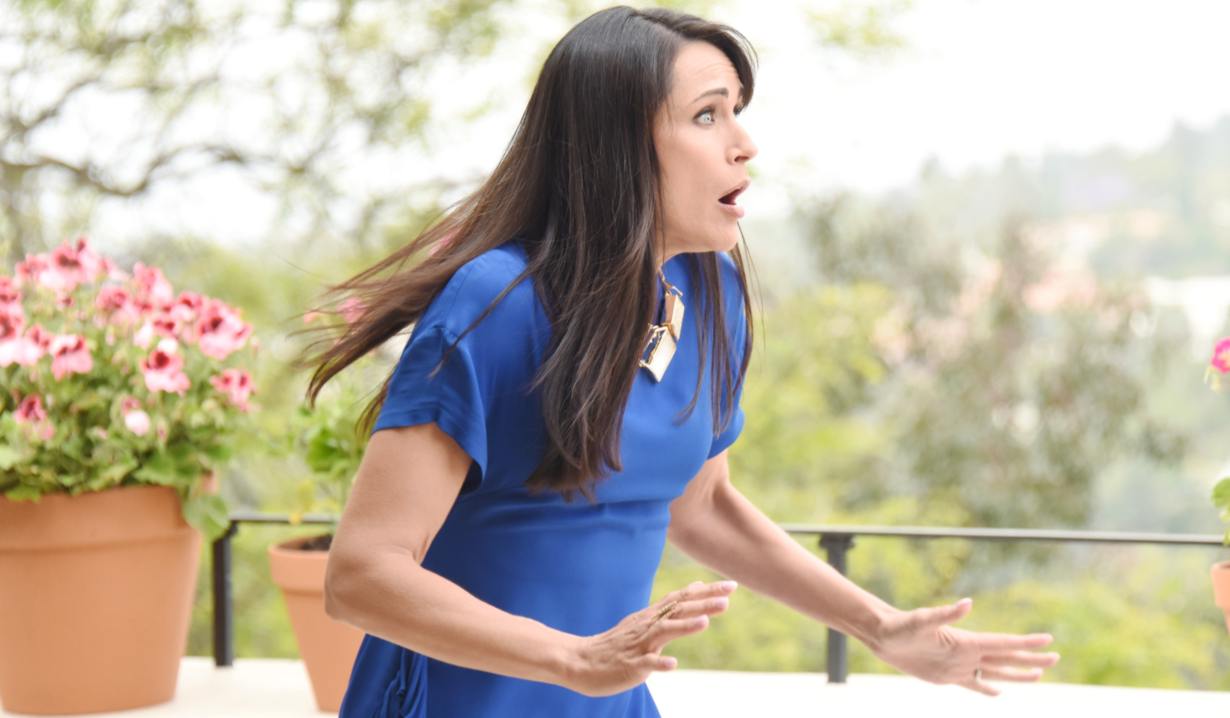 Someone looks through a shotgun at Quinn outside of the Forrester mansion and takes a shot. She screams as the bullet misses. Inside, Quinn encounters Ridge, who heard the gunshot. Quinn exclaims that someone tried to kill her and implores him not to go out there. Ridge refers to the shooter as ‘him’, but Quinn believes it could be Katie. Ridge assures her the police are on the way and questions whether Katie would have tried to take her out. Quinn insists she’s the only person who currently wants her dead.

At Katie’s house, she hovers by the window with a heaving chest and a tear in her eye. Lt. Baker arrives on the scene at the Forrester mansion, where Ridge tells him that Quinn just left to confront Katie, whom she believes took a shot at her. He describes the previous scene at Forrester Creations, but Baker finds it hard to picture Katie Logan as the culprit – unless something’s going on with her and Eric.

Quinn storms into Katie’s house demanding to know the whereabouts of the gun. Katie thinks she’s talking about Charlie’s gun from the design office, but soon realizes Quinn is referring to another incident. Katie is insulted and spits that she’s not a killer. Quinn spots the telescope and Katie rolls her eyes, but admits to watching her and Ridge. Quinn says she reminds her of the person she used to be, and Katie orders her out. Once alone, Katie rants and raves that she’s nothing like Quinn.

Back at the mansion, Quinn gives her statement to Baker, who agrees to speak to Katie, but maintains she’s not a killer. Quinn yells at him to get a warrant. Baker advises Quinn to stay put, but she sticks her head back outside, where she’s in a shotgun’s sights once again.

At Forrester Creations, Rick talks to Zende about cutting their trip short because they needed to get home to their daughter. He shares about his uncomfortable phone call with Nicole. Zende tells him they are going through something. After he’s filled in on the situation, Rick tries to be positive. Zende says he has to believe everything will work out the way it’s supposed to. Carter enters, and Zende leaves. Carter informs Rick there’s an issue with Lizzie’s adoption. There were errors on the document they filed, so Rick, Maya, and Nicole must sign a new one. In Brooke’s living room, Nicole watches miserably as Maya coos over Lizzie. After Lizzie’s gone down, Maya asks Nicole why she seemed stressed. Nicole reveals that she learned she might not be able to have another child due to scarring. Maya reels as Nicole describes her shock and disappointment. She assures her sister she will give Zende a baby – they will have their own family some day. Nicole goes on about how much family means to her husband; she knows what it would do to him to find out she gave the only baby she could ever have to Maya and Rick. Nicole gets Lizzie up, and Maya notes they have a special connection. She takes the baby and says that one day, Nicole will have one just like her for herself.

Thomas is in the middle of Steffy and Sally’s argument.