B&B Recap: Katie becomes enraged and goes too far while spying on Quinn 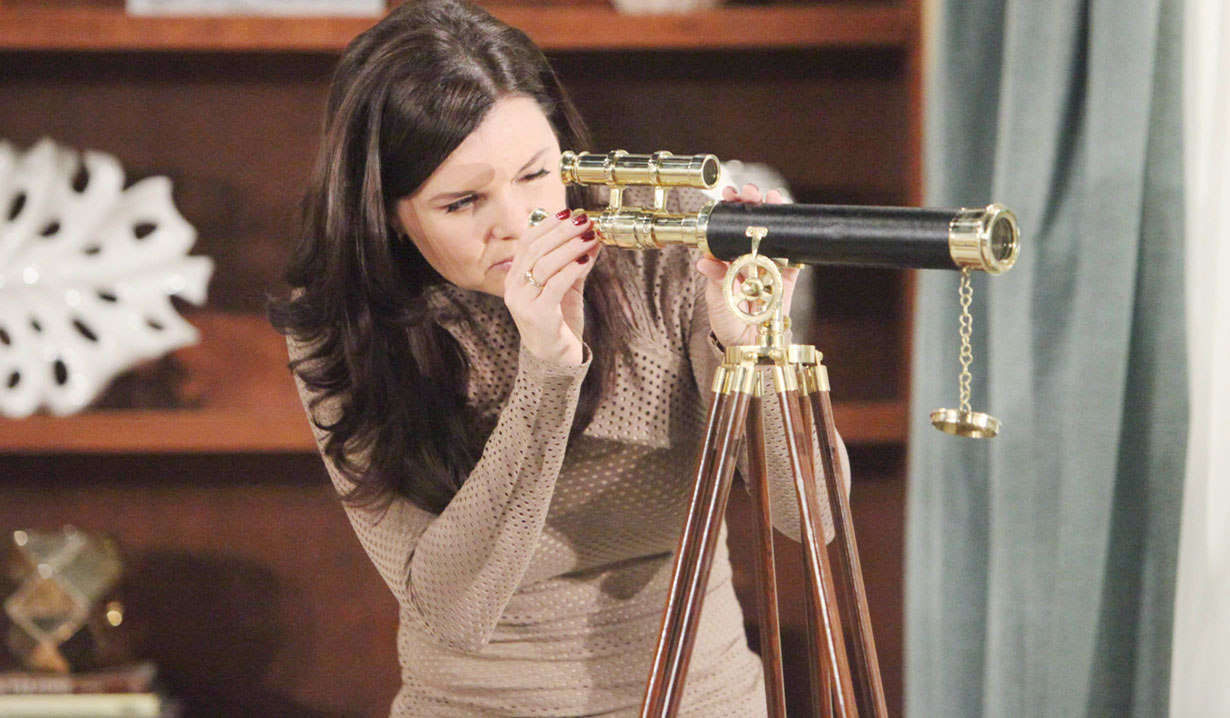 From inside her house, Katie peers through the telescope and zeros in on Quinn standing on the terrace of the Forrester mansion. “God, I hate that woman.” Soon Ivy arrives. Katie rants about being fired by Quinn and seethes, “I’m so angry I could scream! I hate her.” Ivy tries to talk Katie down and pulls the ‘it’s just business’ angle, but Katie disagrees and insists she doesn’t want to tell Eric about Ridge and Quinn’s deceit – she doesn’t want to hurt him – but refuses to stand by and do nothing. Quinn is dangerous and Katie plans to stop her once and for all. “She doesn’t deserve to live.” Katie throws Ivy out then resumes looking through the telescope. The Forrester terrace is empty.

Ridge enters the Forrester mansion and tells Quinn he ran out of coffee at the guesthouse. Over talk of Eric having left for the office, Quinn admits that she’s terrified to go back to work. She doesn’t like being alone with him and warns they can’t keep putting themselves in these dangerous situations. Ridge eats a Danish and assures Quinn that Katie isn’t dangerous. Quinn thinks otherwise and claims, “I think Katie’s losing her mind.” She knows Katie’s watching them. Ridge reminds Quinn that she’s a survivor… not even Katie can screw that up for her. Once alone, back on the terrace, Quinn is locked into the sights of a scope, as a gloved hand steadies a shotgun then slowly pulls the trigger.

On the plane back to LA, Maya admits to Rick that she’ll feel better when she’s home, holding Lizzie in her arms. She worries Lizzie won’t remember her. Rick reassures her and both agree Nicole sounded stressed out. Maya recalls Nicole’s harsh words about her not being a responsible parent and says, “Maybe there’s something going on with Nicole.”

At Brooke’s, Zende observes Nicole holding Lizzie and comments on what a great mom she’ll be. He anticipates raising kids with her. Before long, they’ll have a little one like Lizzie. “You’ll be a mom in no time.” Julius arrives and agrees, Nicole will be a wonderful mother. After Zende leaves, Julius comforts Nicole. He wants her to have faith, there’s no way God will deprive her of having a child especially after the sacrifice she made. Nicole gets a text from Maya, she’ll be home soon. She knows it’ll be good for Lizzie to be reunited with Maya, but Julius reminds Nicole that she’s Lizzie’s mother. “Don’t you ever forget that. She knows that you’re her mother.” Maya barges in and happily takes Lizzie from Nicole. The baby fusses, as Nicole vows to always be there for Lizzie. “She’s happy to see you,” Nicole solemnly says and watches as Maya fawns over the baby. Julius stares at Nicole.

Things between Katie and Quinn take a dangerous turn.

Carter has to discuss a legal issue with Rick.