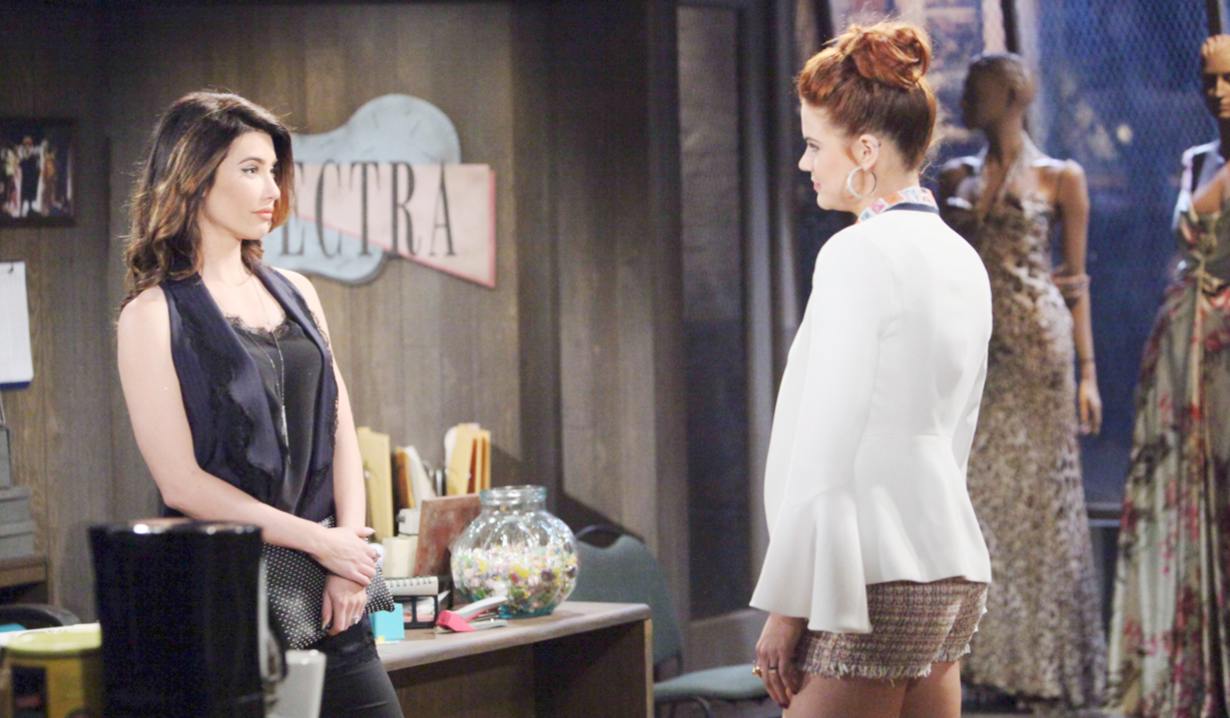 After dinner at the Forrester mansion, Eric enthuses about the gathering while Quinn whispers to Ridge about Katie watching them. Eric announces that Thomas is going to work at Spectra Fashions. Ridge protests as Eric claims they’re going legit. Katie watches Quinn, who flashes to making out with Ridge on the guesthouse bed. Eric pipes up that Ridge and Quinn have decided to consider Katie’s pieces for the jewelry line. Katie perks up. Eric basks in them all getting along under one roof before heading upstairs. Katie asks to speak to Quinn alone. Wyatt questions Ridge about his mother’s weird behavior. Ridge plays dumb. Outside, Katie tells Quinn that designing fulfills her and thanks her for the fair shot. Quinn eyeballs the brunette as she envisions them sharing a close working relationship, and admits she doesn’t see that happening. Katie promises to keep her secret since Quinn’s staying away from Ridge. Later, Quinn cuts Eric off when he talks about all the love in the house. He senses something’s wrong. Quinn asks him to hold her and accept her for all her faults. “I really love you so much.” She flashes to being passionate with Ridge, as he does the same in his room.

At Forrester Creations, Steffy assumes Thomas wanted to meet because he’s decided to stay, but he reveals he’s going to work with Sally at Spectra. Steffy is stunned and asks if it’s to get back at her. Thomas wishes to prove himself and find legitimacy and respect. Steffy tears up about him turning his back on the company…and his family. She decides she’s worried about him, but Thomas insists this was all his idea, not Sally’s. He has been patient for a long time now and confirms he’s really doing this. Steffy asks, “You love Sally that much?” Thomas replies that he does. In the design office, RJ is happy to hear that Coco made up with Sally. He asks what made her change her mind. Coco replies, “Actually, Thomas.” She updates RJ that Thomas and Sally plan to run Spectra together. She notes he’s really stepping up for Sally.

In Sally’s office, the gang enthuses about the new partnership. Darlita gushes that they’ll get to see Thomas all day, every day. Saul glowers in the corner. He wants to know what happens if it doesn’t work out. Sally is willing to take a chance on Thomas, and adds that he convinced Coco to forgive her as well. Later, Steffy arrives to confront Sally, who guesses she’s not there to pop open the bubbly. They butt heads as Steffy informs her they’ll never be on Forrester’s level, and accuses Sally of robbing Thomas of his future. Sally argues that’s not the case – she loves her brother, and he loves her. She adds that Thomas can call his own shots here, and she could accuse Steffy of trying to hold him back. Sally wants to be friends, but Steffy only issues a warning – if she hurts or uses her brother, she’ll answer to her.

Rick is disturbed after an interaction with someone in his family.