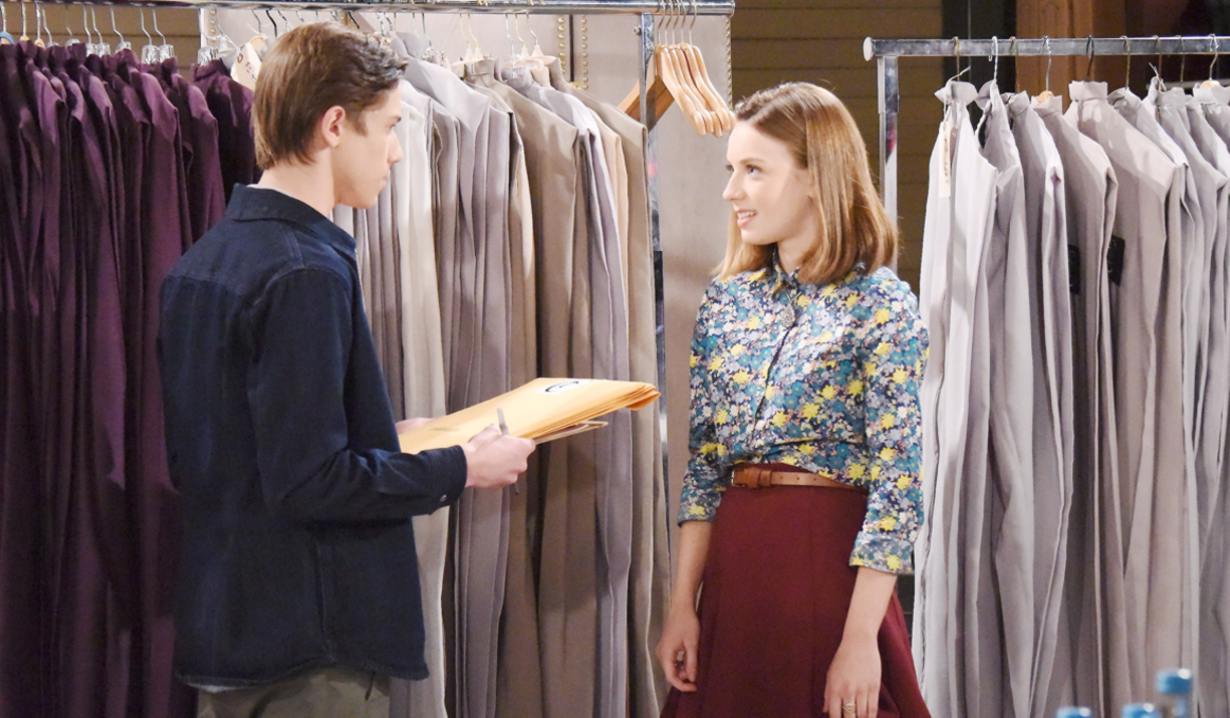 In the Forrester Creations boardroom, Rick, Zende, Maya, Nicole and RJ wonder if Brooke and Ridge will send wedding photos. Zende asks RJ if it’s wise to have Coco working in the cutting room – she’s a Spectra. Debate ensues. RJ insists he knows the girl, but Zende warns about the history with her family. RJ asks them to give her a chance.

After, Thomas enters and is grilled about inviting Sally Spectra to Sydney. Zende reminds him she crashed their wedding and posted videos of the food fight online. Thomas argues that she posted nothing from Australia, and recounts the story of Steffy sending Sally into the harbor in Sydney – they all had a good laugh; it’s time to move on. Zende presses for caution in dealing with the Spectras.

At Spectra Fashions, Shirley is being hounded by calls from the loan guy, and Saul laments that Coco hasn’t been wearing her spy jewelry. When Coco appears, ready to go to Forrester, Shirley convinces her to wear the necklace, and calls out cheerily, “We’ll be seeing you!” as she leaves. Soon, Sally arrives. Shirley wants photos – she went to Australia on a mission and better have come through for them. They argue as Sally resists and announces she cannot steal from the Forresters. Shirley sneers that it’s too bad – they’ve already put the plan into motion. She hollers at Sally that she can’t hang with the Forresters – she’s just the flavor of the month! Sally argues that her Aunt Sally won Eric’s respect and says she is not a criminal. Shirley pleads – they won’t survive another month if they don’t do this; she won’t let Sally back down.

Backstage in the Forrester showroom, RJ holds a top-secret envelope and wants to show Coco some of his dad’s latest designs. Coco balks because people don’t trust her. RJ insists he trusts her and she works there. He compliments her until she blushes. Zende looks in as RJ tells her it’s not fair she’s treated differently because of her last name. In the office, Rick, Maya, and Nicole continue to argue with Thomas about the Spectras. He feels sure Sally won’t steal their designs. In the design office, Zende worries to Nicole that Coco will use RJ; it’s strange that they’re suddenly surrounded by Spectras. They agree they must be desperate. Zende plans to keep a close eye on them.

More: Love at First Bark debuts on Hallmark this weekend

At Spectra, Saul logs on and he, Shirley, and Sally can see RJ with his envelope of designs. Sally takes a call from Thomas, who tells her she was the best part of the Australia trip. Sally disconnects as RJ shows Coco the first design. Shirley squeals, “We have hit the jackpot!” Sally hesitates and Shirley angrily throws down the gauntlet. “You have to be all in. It’s now or never!”

Coco and RJ connect by talking about their pasts.