B&B Recap: A livid Brooke is undeterred by Quinn’s desperation 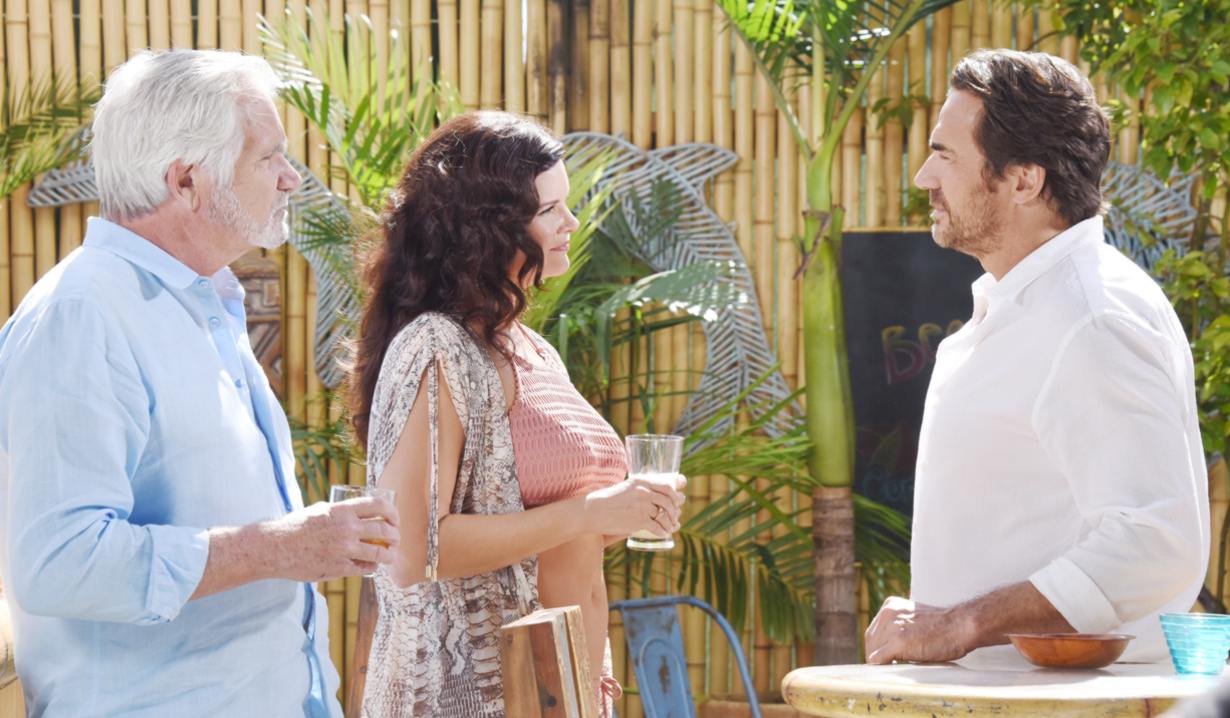 At Forrester Creations, Maya admires Rick at the CEO desk and talk turns to the wedding. Rick hasn’t heard from his mother, but feels no news is good news.

Eric calls and Rick enthuses to Maya that Steffy ziplined into her wedding. Maya asks how he feels about Brooke marrying Ridge. Rick is trying to be positive about that; but he’s still worried. Talk turns to how good Eric sounded. Rick confidentially admits that maybe he’s been wrong about Quinn.

More: Latest news on B&B’s Kim Matula and from all four soaps

On the beach in Australia, Quinn protests to Brooke that the moment between her and Ridge wasn’t what it looked like, but a livid Brooke snaps at her to shut up. She hisses that Quinn is a like a disease and warns her time is done.

In the reception area, Eric and Katie chat with the bartender (played by The Price is Right’s James O’Halloran. Ridge appears. Bill strolls over and snarks, “Don’t you have a wedding to rehearse for, and a loving, trusting woman’s heart to break…again?” Bill and Katie leave. Later, Bill complains to Katie he was sure it would be over with Ridge and Brooke by now. He mulls the idea of starting over in Sydney. Katie muses about Quinn and Brooke both disappearing – maybe they had something to talk about.

Related: This week’s spoilers for B&B and all four soaps

Still on the beach, Brooke rants at Quinn for cheating on Eric with his own son. Quinn insists there was no cheating. Brooke snarls, “That will be for Eric to decide!” Desperate, Quinn pleads with Brooke that she can explain things. Quinn reveals what happened between them in San Francisco and says it was a gift that Ridge stopped hating her; it brought the family back together. Brooke is still furious as Quinn works to convince her not to cancel her wedding. Outraged, Brooke asks Quinn if she really thinks she would marry a man that Quinn has to ‘explain’ to her. Brooke declares that after what she saw today, she will not have a husband…and neither will Quinn! Elsewhere, Eric’s going to look for Quinn, and Ridge decides to search for Brooke. By the shore, Brooke hollers at Quinn for betraying Eric. Quinn pleads and protests. Brooke isn’t moved. “That wasn’t the first time, was it?” Quinn will do anything to make this right, but Brooke’s telling Eric. In the parking lot, Brooke just misses Eric, and screams at Ridge for making her fall in love with him again before leaping in a cab. Quinn runs up and gasps, “She saw us!” They jump into a cab as Quinn worries about what this will do to Eric. At the hotel, an upset Brooke tells Eric that something horrible is going on. “And you need to know about it.”

Forrester family members in Los Angeles wait for details of the weddings in Australia.

B&B Recap: Brooke seethes at what...