Thursday February 16, 2017: Zende and Nicole revel in being newlyweds, Pam acts on her suspicions, and Steffy confronts Sally. 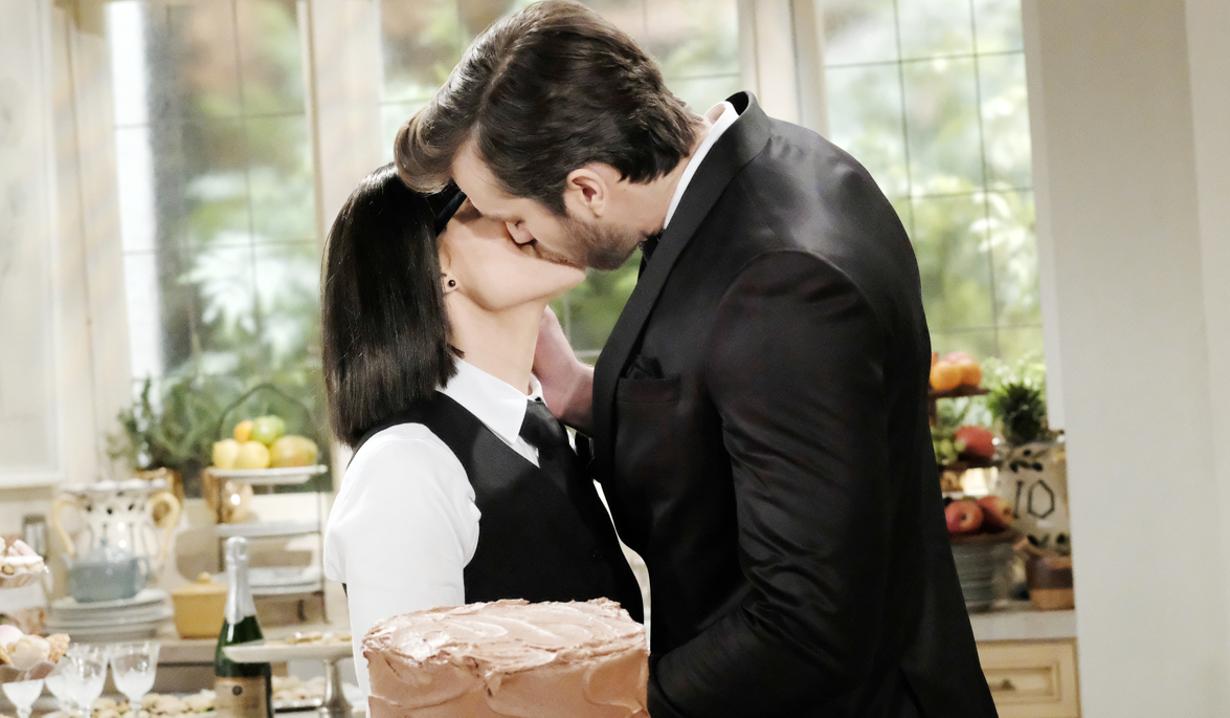 At the Forrester mansion, everyone congratulates Zende and Nicole. Kristen cries and thanks Nicole for making her son so happy, and Eric welcomes her to the Forrester family. Everyone gathered shares in a toast to the happy couple. Julius remembers how beautiful Vivienne was on their wedding night, as Pam tells Charlie the caterers seem to be slacking off. Nicole admires her portrait, and Zende explains how he made it happen. Eric pipes up that Quinn gave her blessing. Quinn confirms she was okay with it – Maya and Rick are surprised.

In the kitchen, Shirley worries to Sally that they’ll be found out and led out in handcuffs. Sally hands her a bottle of champagne – they need to look useful.

They return to the living room, where Sally muses about the family supporting each other. She looks over at Thomas, who watches her for a minute before approaching and calls her out for imitating a caterer. He notes imitating is what Spectras do best, before complimenting her on how good she looks. Sally says he doesn’t look so bad himself. Nearby, Steffy and Liam look forward to becoming husband and wife, and Quinn watches Ridge pour a drink across the room. Back in the kitchen, Pam confronts Shirley about her suspicious wedding cake and accuses her of being a tabloid reporter. Shirley rushes out with a tray. Pam follows her out and tries to convince Charlie that she’s undercover press.

Thomas takes Sally into the Forrester kitchen alone and tries to convince her to get out of there. She’s flattered that he’s looking out for her, and they kiss. In the living room, Eric proposes another toast to the newlyweds. Everyone gathers around Zende and Nicole and they take turns joking, giving advice, and expressing their pride and love. Nicole and Zende thank them all for their support and for sharing their special day with them. Zende invites them to stay on until Eric kicks them out, but he and his bride have somewhere to be.

In the kitchen, Sally has just told Shirley they should go when Steffy appears. “Sally Spectra!” She confronts her about crashing her family’s wedding to cause another scene for publicity. Sally apologizes for getting cake on her at Il Giardino. Steffy invites her to try picking cake out of her hair, and pushes her face first into Shirley’s chocolate confection. Later, Maya thanks Eric for making her sister’s day special as she and Rick leave. Quinn oversees her portrait being reinstalled in its place on the wall and then canoodles with her husband. In Zende’s room, he and Nicole reiterate how blessed they feel to have fallen for one another. Zende assures her he is hers forever.

Bill has more to say about Brooke’s plans to marry Ridge.