Friday February 3, 2017: Thomas, Rick, and Maya square off with Quinn, Bill makes his intentions clear, and Sally hires her Saul. 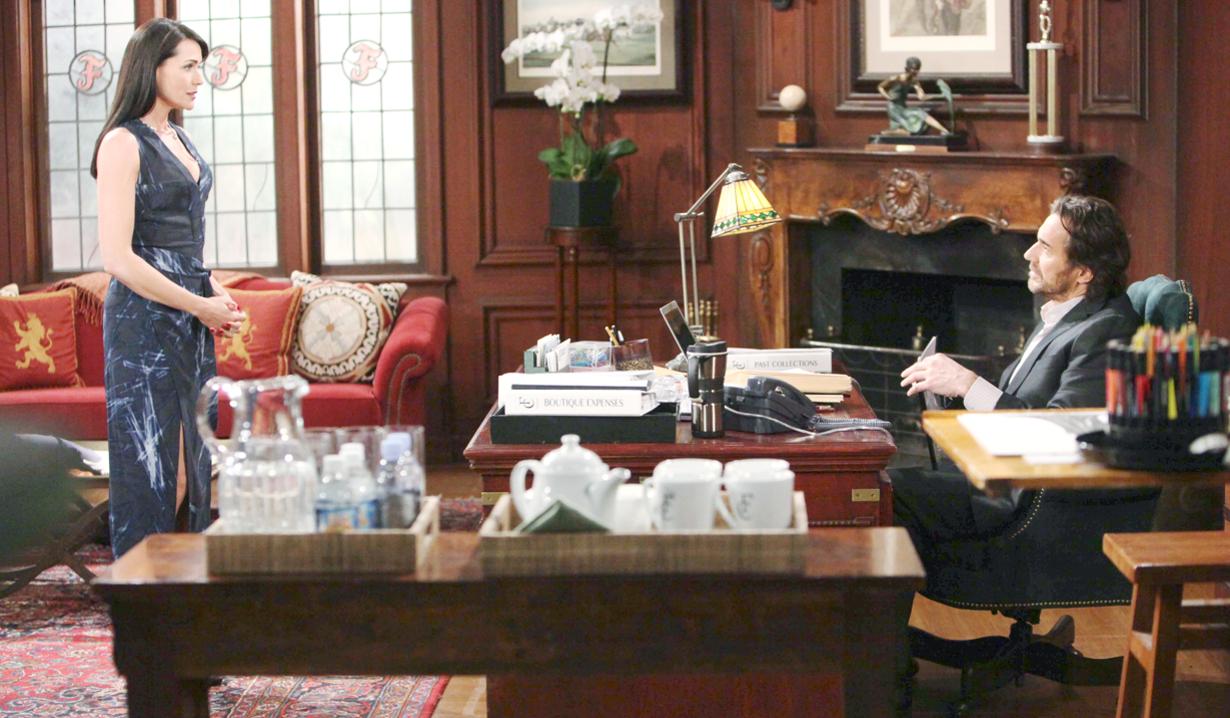 At Forrester Creations, Brooke and Ridge enthuse over his promotion. She’s shocked that he has Quinn to thank for it. She goes on about the change in their interactions and wonders what went on between the two of them while she was away. Brooke then warns him not to let his guard down where Quinn is concerned. Ridge reassures her. Elsewhere, Thomas, Rick, and Maya brood as Pam wonders why everyone’s so bummed out – it’s a family business, and it’s just a title.

The trio jumps on her. Quinn appears and says Eric has full confidence that Ridge and Steffy are the ones to lead. They attack Quinn and wonder why she’s suddenly handpicking CEOs at their company. After, Thomas, Maya, and Rick rant to one another – maybe it’s time to consider leaving Forrester. They decide it’s creepy how Quinn and Ridge are suddenly supporting each other and wonder what happened. Thomas feels there is definitely something going on. In the hall, Pam tells Quinn she sees what she’s trying to do – bring the family back together. If Quinn and Ridge can kiss and make up, the others are bound to come around eventually! Later, Quinn watches, unseen, as Ridge and Brooke canoodle and talk about celebrating at home later. After, Quinn gets Ridge alone. He senses something is bothering her. She blurts that she saw him kissing Brooke. Ridge asks if she was spying on them. Quinn assures him she wasn’t, but asks him to promise not to tell Brooke their secret. Brooke appears, having heard, and demands to know what’s going on between the two of them. “Tell me. Now!”

In Malibu, Bill visits with Liam and Steffy, and learns that Ridge was appointed as co-CEO…thanks to Quinn. Bill exclaims, “They hate each other!” Steffy relays that things changed on their trip to San Francisco. Over dinner, talk turns to Bill planning an engagement party, and Wyatt adjusting to the new norm. Bill also wants his sons working together at Spencer. Liam feels Bill’s ulterior motive in planning a party is because Ridge will be invited…and Brooke will be there. Bill promises them he will never give up on Brooke. He’s confident because Steffy’s father inevitably screws up. “We will start our life together; our destiny.”

At Spectra Fashions, Sally and Shirley begin interviewing prospective tailors. They struggle to communicate with the first candidate, who speaks French. The next prospect is a biker, who is dismayed to hear he’d be cutting fabric, and the last is Saul Feinberg (Alex Wyse), who gets flustered at the sight of Sally. He explains that tailoring is his life; he’s following in his grandfather’s footsteps. Sally and Shirley flash to Saul and Sally in the old days. Saul gets the job. Sally gushes, “I got my Saul!” After, while cleaning, Sally insists the 80s are coming back strong and so is Spectra. Shirley points out she’s never designed a line before. Sally wants her to buck up and be supportive – they’re going to come out on top.

Thomas runs into Sally again at the outdoor restaurant and learns she’s Sally Spectra. She wonders if he has a problem with that.

Ridge lets Brooke in on a secret.

Modern Family Kids, Then and Now: See How Much Everyone Grew in 11 Seasons