Tuesday January 31, 2017: Zende returns with an agenda, Thomas makes a new acquaintance with a surprising name, and Eric makes a decision about Forrester Creations. 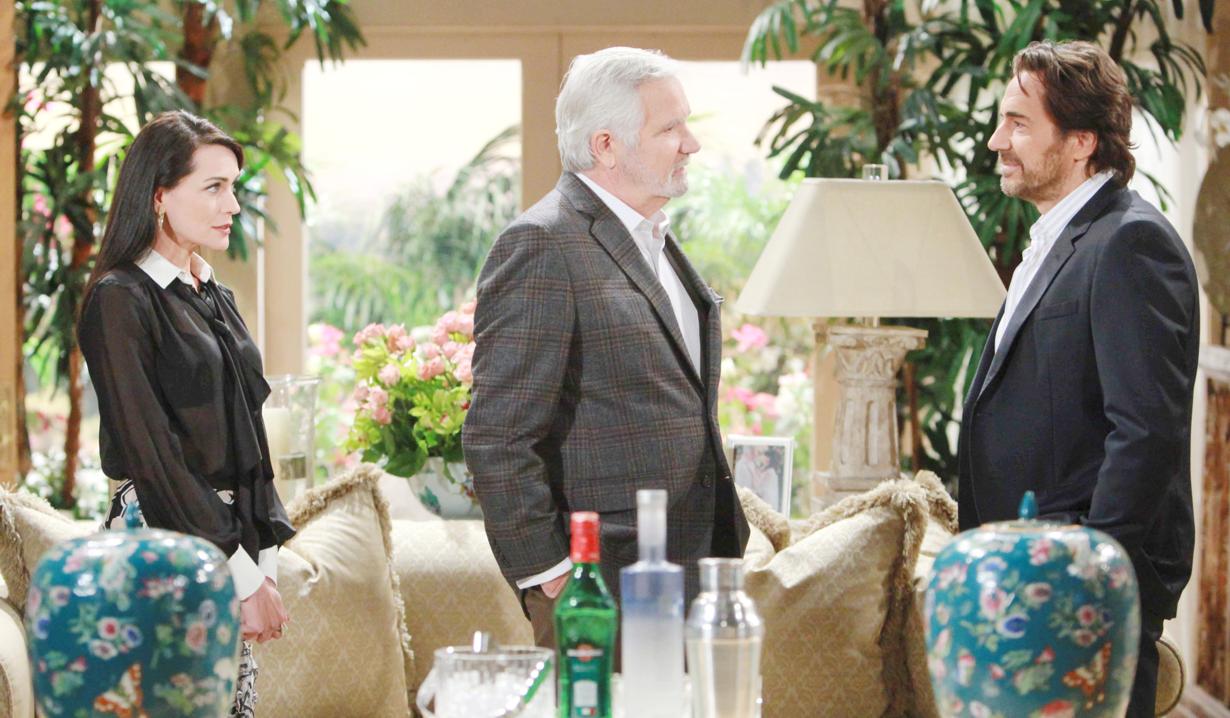 At the outdoor restaurant, Zende tells Thomas that being away gave him time to think about securing a future with Nicole. Thomas grouches that while he was in New York trying to sort out his personal life, Steffy was getting herself appointed as CEO. Talk turns back to Zende, who plans to make things right with Nicole. Thomas asks him about work – does he only want to be a photographer? Thomas suggests it may be time to make his own plans, as there are two factions at work right now. He’s not okay with being passed over. Thomas feels he’s proven himself. Zende advises him to hang in there. Once alone, a redheaded young woman sitting nearby tells Thomas to cheer up and offers him a drink. He declines. She asks what’s got him down. Thomas shares that it’s family issues – they’re in the fashion business.

Nicole and Steffy chat in the office at Forrester Creations. Steffy feels like she has so many blessings in her life right now. She is proud and thankful to be where she is right now, and is relieved she made up with her grandfather, who put his faith in her to run the company. Steffy notes her brother has issues with her promotion and she doesn’t want him to feel overlooked.

At the Forrester mansion, Eric reports to Quinn and Ridge on his trip to Genoa City. He wants to discuss what he and Ridge touched on before he left – the CEO chair at Forrester. The three of them talk about how there has been enough tension in the family; it’s time to put that behind them. Ridge asks if they are making him an offer. Eric first wants to make it clear he is very pleased with Steffy’s performance. He admires that Ridge stayed on in spite of being passed over, and adds that Quinn had some insightful things to say about him. Eric looks forward to the day Ridge sees Quinn as he does. They talk about forgiving and moving forward. Eric thinks Steffy and Ridge running the company together will be unbeatable. Ridge vows they won’t let him down. He embraces Eric and thanks him. Eric tells him to thank Quinn. Once alone, Eric says Quinn reminded him of the power of forgiveness.

Ridge arrives at Forrester and breaks the news to Steffy that Eric wants him to be co-CEO with her. “We’ll be a team.” He makes it clear she’s not being demoted. Steffy learns it was Quinn’s idea. Ridge confirms Eric forgave him; the family is back together. He’s really happy about the idea of them working together the way he used to with his dad. Steffy would be honored to share her title with him. They shake hands. Ridge has to call Thomas before making it official. Elsewhere, Zende snaps photos of Nicole while she works and talks about her being Forrester’s hottest new executive. She says she’s not an executive yet. Zende tells Nicole he had to come back; he missed her too much. He regrets hurting her and still loves her. “You are it for me.” Zende will fight for their future.

News: B&B to shoot on location in Australia for 30 year milestone

At the outdoor restaurant, Thomas takes a call from Ridge summoning him to the office. He says goodbye to the redhead, who says her name is Sally. She learns he’s a Forrester. He asks her last name, but she says it’s not important. Once alone, the young woman closes out her tab. “The name is Spectra. Sally Spectra.”

At Forrester Creations, Ridge and Steffy embrace and look forward to creating their own legacy as co-CEOs.

Liam feels suspicious of Quinn when he hears about Ridge’s change in status.