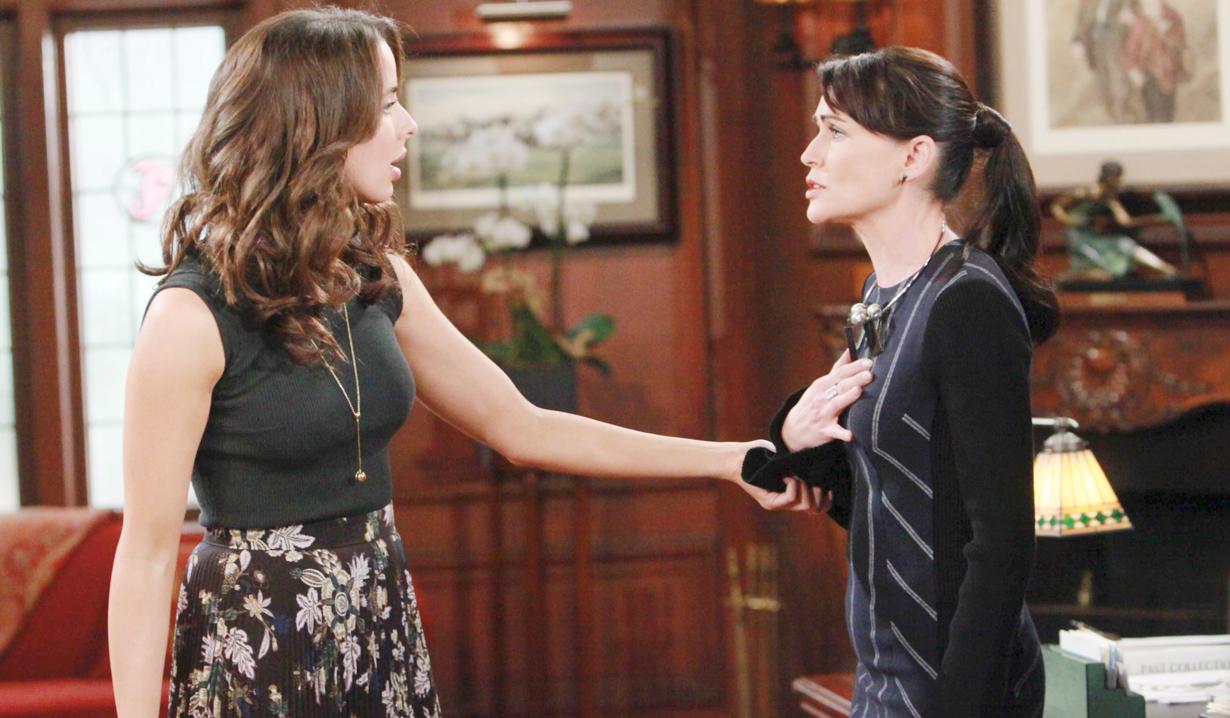 At the beach house, Wyatt and Steffy recall that they had some good memories there. Wyatt muses about the day they got married – it’s a day he’ll never forget. Steffy asks him not to go there; she can’t give him what he wants. A knock comes at the door. Wyatt invited someone to join them – it’s Carter, who married them. This time he has divorce papers. Wyatt presents them to Steffy. Carter wishes them luck and leaves. Steffy remarks that the divorce is finalized. Wyatt nods. He wishes Carter was renewing their wedding vows, but knows that’s not what she wanted. Wyatt regrets pressuring her and admits Liam was right. Wyatt knows his brother loves her, and doesn’t want to be with her if it’s not what she really wants. Steffy hugs him. Another knock comes at the door – it’s the laser tattoo removal doctor to finish Steffy’s last treatment. Wyatt declares their marriage is officially over. Soon the tattoo is gone and Wyatt asks how it feels to be a free woman.

More: B&B’s Most shocking vs romantic romps of 2016

In Malibu, Liam prepares a romantic dinner for Steffy. When he hears the door slam, he assumes it’s her, but it’s Bill. They rehash the situation with Eric, Quinn and Wyatt interfering in Liam’s relationship. Liam says, “If only Ridge…” Bill asks, “If only Ridge what?” Liam deflects, and says he wishes Steffy would move back in there and get that tattoo ring off her finger. Bill enjoys seeing Liam all fired up and determined. Liam says Steffy went to Wyatt’s to cut ties; Wyatt will have to get by without her. Talk turns to Ridge and Quinn attending the symposium. Bill learns that Ridge had a plot to remove Quinn, but it failed. Bill predicts Ridge will screw up. Liam grouses about how long Steffy is taking. Bill advises him to be patient; he still has faith he will end up with Brooke. Liam wonders if he has a plan. Bill says there’s no need – Ridge will self-destruct like always.

At Forrester Creations, Eric admires Ridge’s design and asks who they have to thank for inspiring it. Pam weighs in that it really is beautiful and inquires about whether he and Brooke have set a wedding date. Once alone, Eric asks Ridge what happened in San Francisco. He goes on to say he’s waited a long time for Ridge to see her as he does, and was encouraged by what he said about her onstage at the symposium. Eric would appreciate it if Ridge got closer to Quinn. In another office, Ivy asks a rattled Quinn if she’s okay. “What’s going on?” Quinn admits she’s dealing with Ridge. Ivy sighs about him piling on the hate on Quinn; it must be awful. After, Quinn flashes to all the close moments between her and Ridge. Ivy reappears, asking, “Quinn! What is going on with you?” Quinn panics about screwing things up with Eric. She needs to be alone, and walks out. Down in the studio, Quinn tries to calm herself. Ridge appears.

Katie becomes suspicious following a conversation with Ivy about Quinn.

The Bold and the Beautiful is...